Home F365 Says Why we are not so Keane on Roy the tired, old pundit… 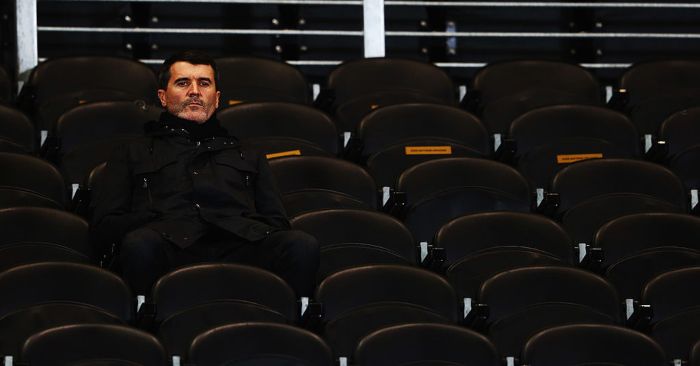 Watch Roy Keane whenever something semi-serious is happening around him in the Sky studio. The next time Presenter A, B or C is palling around with Gary Neville or Jamie Redknapp, notice how hard he tries to suppress any sort of mirth.

That’s because Keane is a character and smiling is forbidden. His draw as a television personality lies in his brooding menace; the sense that, at any minute and with no notice at all, he might be about to launch himself through the screen, spray glass across your living room, and demand that you show him your medals.

It’s a performance and it’s a very, very good one.

Keane always comes to mind during that famous scene in Jaws, when Brody, Hooper and Quint are trading war stories on that first night at sea, and Robert Shaw is rolling through his monologue.

“You know, a thing about a shark. He’s got lifeless eyes. Black eyes, like a doll’s eyes. When he comes at you, he doesn’t seem to be living – until he bites you.”

That’s Keane, isn’t it?  The player that is. If you look back on the photographs of his career now, the ones which capture him screaming in a referee’s face or bearing down on an opponent, there’s so little life in those eyes. Every other muscle in his face is drawn tight, contorted with rage, but his expression is never authentically wild. Those images often show a body out of control, but nearly always with a mind at resting pulse.

It was frightening and interesting, dark and fascinating.

It’s interesting how players tend to become who they are on the field. In the days after Saipan, when Keane had flown home from the 2002 World Cup, the television cameras took up residence outside his home. It was the usual rolling news fare, with few updates of any real substance, but Keane would occasionally emerge to walk his dog.

How strange that was. Roy Keane with a dog – a cuddly retriever, no less, reliant on warmth, love and care and all the other qualities so obviously absent from his game. Keane has a dog. Really? That he strokes by the fire and that he gets up early to feed. Really? Not a snake or a spider or some other kind of hard-bodied, poisonous something? A creature that not only doesn’t need affection, but hasn’t even the capacity to accept it.

Around the same time, he also gave an interview to Irish television. He spoke well. He explained his side of the Mick McCarthy feud clearly enough and, towards the end, he looked very close to tears. For once, his eyes softened and the lilt in his voice ever so slightly cracked. It’s still compelling to watch now, all these years later. Like hearing the Queen swear, seeing Keane exude any sort of vulnerability seemed like a betrayal of what he was.

Almost 20 years later, Keane is something different entirely. He is Noel Gallagher now, presumably an insult equally offensive to both. Like Gallagher, who seems to judge his own work’s gravity to be somewhere between Led Zeppelin IV and Pet Sounds, Keane’s relevance is determined by the fights he picks and the enemies he’s prepared to make.

That has been Keane’s identity since he first appeared on television. The great irony being that it represents a perfect inversion of who he was. Keane the footballer was a dispassionate killer. He simmered with an energy which had to be contained, but which still managed to be threatening in its latency.

Now, he plays the part of his younger self, losing his temper on cue and offering scripted responses to any modern player who doesn’t fit within the strict boundaries of his own dated silhouette. Coloured boots, handshakes in the tunnel, one-footed tackles; Keane is a sort of everyman in a way, existing to take umbrage with facets of the game which upset those of a certain age.

The effect is so empty and tired. His role on television, seemingly, is to machine-gun insults at players who – at a guess – his 25-year-old self would have hated. He’s the child’s wind-up toy capable of parroting up to five different withering remarks, none of which really have anything to do with the game he’s just watched. Like Graeme Souness, give his strings a pull and hear him eviscerate a haircut, a smile, or a player for having an assumed attitude problem.

The shame of it is that Keane used to possess a fascinating darkness. You hated him, of course, but he was combustible in a way which suggested that he was something other than a thug. He was a proper villain, one with depth. Even towards the end of his career, up to the MUTV incident which ended his time at Manchester United, it was easy to believe that his behaviour was the product of a rare DNA strand. He just wanted to win more than anybody else. He wanted to set a standard, an example, just with the occupational hazard of an elbow or fist.

Now, perhaps, he’s showing himself for what he is. Just another ageing footballer. Another narcissist in thrall to his own out-of-date primacy. Someone happy to live out his days slandering any player straying from the path he trod, all the while clinging to an old routine which, once upon a time, very, very long ago, made him interesting.

Maybe there was never quite as much behind those eyes?