Home Mediawatch Why would Liverpool fans want a 6/10, erm, ‘ace’? 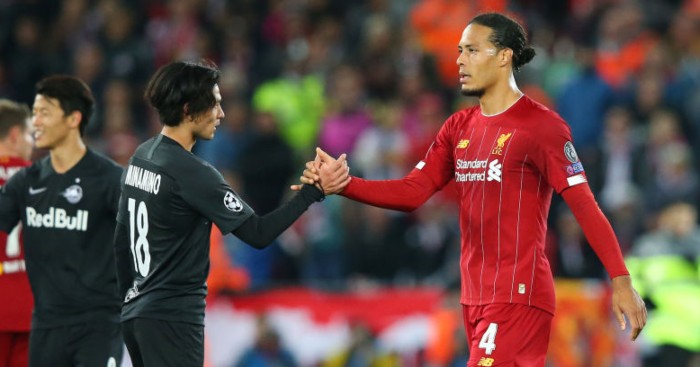 An ace 6/10
After John Cross gave Dele Alli 7/10 while Philippe Coutinho was rated at just 5/10 after playing such a small part in Bayern Munich’s 7-2 win at Tottenham, his Daily Mirror colleague David Maddock upped the ante with his player ratings on Wednesday.

In a classic of the ‘filing these early, didn’t really pay any notice to the opposition’ genre, Maddock merrily awarded one-goal, one-assist man Takumi Minamino just 6/10. Which made him exactly as good as the embarrassed, on his arse Virgil van Dijk on the night.

So it was odd to see the Mirror then bring us the ‘news’ that ‘Liverpool fans urge Jurgen Klopp to sign Red Bull Salzburg ace Takumi Minamino’.

Ace? Distinctly average according to your Merseyside man.

Yesterday’s news
Nothing sells quite like Manchester United gossip, so there’s no mystery about the BBC‘s choice of rumour to sell their gossip column on Thursday morning. We did the same ourselves except with, you know, new gossip.

Manchester United are ‘continuing to track’ James Maddison, ahead of a ‘potential £80m move’.

The issue we have with the BBC’s choice of the Maddison gossip is that they attribute it to the Daily Mail. Click on the link and the clue that this gossip does not originate from the Mail comes as early as the fourth word, which is ‘reportedly’. By the fourth paragraph we know the claim actually comes from the Evening Standard – three whole days ago.

It took us roughly 30 seconds to work out that this was not new gossip and leave it out of our gossip column. Either the BBC simply didn’t bother (astonishing considering the size of their editorial staff) or they checked, clocked that it was an old story and just thought ‘f*** it, people will click’.

Mediawatch is not sure which is the most damning, but the fact that their second item of gossip is taken from the Manchester Evening News, which was relaying a claim made by the Transfer Window Podcast on September 30, means that we’re edging towards the ‘f*** it’ theory.

That’s hilarious
Mediawatch holds a special place in its arse for media organisations who tell us when certain things are ‘hilarious’.

On Wednesday, The Sun online brought us this:

Consider us both confused and unamused. We are way too old for this sh*t.

Then on Thursday in the Liverpool Echo:

Because there is literally nothing funnier than a friendly wager between two teammates about assists.

A history of violence
Ever wondered what would happen if you put a middle-aged Millwall fan in charge of reporting on Tottenham for the country’s biggest-selling newspaper?

‘Could you imagine legends Dave Mackay or Graham Roberts saying nothing had they been part of Tuesday’s fiasco?

‘The Lilywhites back then, who were on a fraction of the pay but had a hundred times more heart and honesty than most of this current mob, would have ripped their team-mates to shreds – and not just with verbals.’

Paul Jiggins there. Still advocating footballers twatting each other in 2019.

Burying the lead
That Paul Jiggins piece appears in The Sun newspaper under the headline of ‘They’re Tottenumb’ but by the time the online guys have got their click-hungry hands on all of those words, it becomes ‘Spurs spend decades trying to topple Arsenal as North London’s top dogs…now Poch’s flops have turned into them’.

27 paragraphs, in case you were wondering.

And on Thursday The Sun are doubling down on those delicious rumours with this headline:

Two things are definitely unconnected and everybody is happy to make that clear, including The Sun, who are definitely not trying to profit from any suggestion otherwise. Oh no.

Hard Times
It’s not often that The Times make us laugh but their big claim that ‘Tottenham Hotspur fear that a disillusioned Harry Kane could join the growing list of senior players who want to leave in the summer’ has tickled us. Surely every club ‘fears’ that their best player will want to leave. The only club that doesn’t ‘fear’ that scenario is Manchester United and that is because their best player is Scott McTominay.

It is illustrated in the newspaper with a graphic showing that ‘Among teams to have played in the Premier League in 2019, only Brighton & Hove Albion have lost as many matches as Tottenham in all competitions’. So basically, Spurs are worse than Fulham, Huddersfield, Watford and everybody else. That’s what the graph says.

What The Times don’t mention: Tottenham did indeed lose 16 games in 2019 but they did play 39 times – rather more than Brighton’s 33 or Fulham and Huddersfield’s 30.

Welcome to a world where Manchester City and Liverpool are only really matched by Sheffield United, Aston Villa and Norwich. Let’s call them the Big Five.

Except Villa lost ten games, Norwich eight and Sheffield United seven in 2019. But forget that because TOTTENHAM ARE IN CRISIS.

Flip-flop
From The Sun online‘s piece about Martin Odegaard being a target for Arsenal among others:

‘Now Premier League giants have joined the race to land his signature, with Arsenal hoping he can be a long-term replacement for flop Mesut Ozil.’

Flop? Only Thierry Henry has ever been credited with more Premier League assists in a single season. Have some sodding respect.