Home All The News Why would Man United sell Smalling for a song? 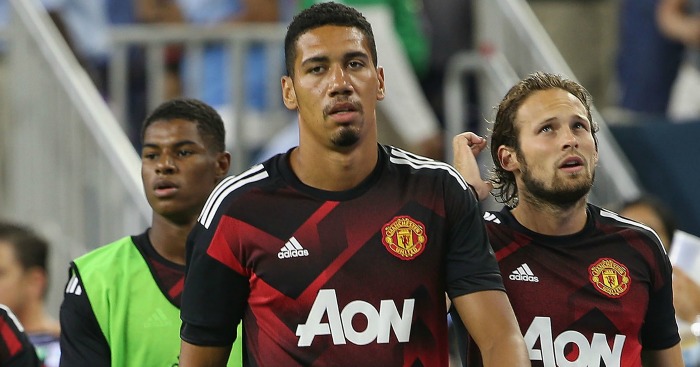 It’s hardly unpopular to suggest that the transfer market has not just gone mad this summer, it’s walking around with its underpants on it’s head and a pencil stuck up each nostril.

The valuations most clubs are placing on some of their players reflect the lack of finacial necessity to sell but, if reports are to be believed, that strategy stops half way down Sir Matt Busby Way.

Chris Smalling will apparently soon be the subject of a £10million bid from West Brom, with Leicester City, Crystal Palace and Stoke all credited with varying levels of interest in the him. That sum is scandalously low for a player of Smalling’s ability and experience, and it is hard to see what incentive there would be for Manchester United to do any deal based around those offers.

There is no question that last season was not Smalling’s finest. Injuries fractured his campaign, with eight consecutive games through September and October being his most consistent run of action. A toe problem then sidelined him for seven Premier League games and a knee injury sustained on international duty then ruled him out of a manic April, during which United played nine matches as their hectic season reached its crescendo.

In Smalling’s absence, his team-mates and rivals for the shirt prospered. Eric Bailly enjoyed a splendid debut campaign in the Premier League, making him United’s first-choice central defender. Marcos Rojo displayed the best form of his United career; Phil Jones impressed when he wasn’t injured; and Daley Blind just got on with his job like Daley Blind does.

Having his attitude and mental toughness questioned by Mourinho upon each layoff is unlikely to have speeded up the recovery process for Smalling. The manager publicly doubted the defender’s willingness to put his body on the line for United, and even though it was later shown that Smalling had played on with a broken toe, that did not stop Mourinho rehashing the same theme in April. Before Rojo’s season-ending injury left the squad decidedly thin on centre-halves, Jones and Smalling were both crocked while away with England. In Jones’s case, it was Smalling doing the damage.

That almost-comedic episode in March typified the pair in many United fans’ minds. Despite 13 years combined service and 410 appearances, neither has managed to establish themselves as a mainstay in the United defence. Mention Jones and, harshly, many supporters think of injuries, his gurning face, and THAT header against Arsenal which, actually, was a brilliant, brave piece of defensive improvisation. When Jones gets a consistent run of games in one position, there aren’t many better defenders around, as he showed when he formed an impressive partnership with Rojo during 12 starts in 13 Premier League games around the turn of the year. Inevitably, though, that run was halted by injury.

Smalling, capped 31 times by England, appeared to have won the doubters over once and for all during Louis van Gaal’s second season, when he was named as United’s Players’ Player of the Year. That was only a year ago. Nobody played more games, either in the Premier League or in all competitions combined, with only Blind equalling Smalling’s 55 appearances. The fact he was so impressive then made his contribution last term even more disappointing but, were it not for injuries, there is little to suggest that he would not have produced similar form.

Smalling began the season as Mourinho’s first choice alongside Bailly, captaining the team in four of his first five starts before sustaining his toe injury. Many then saw the manager’s comments about his “cautious, cautious, cautious” approach to playing through the pain as a direct criticism, but as Jones, Luke Shaw, Henrikh Mkhitaryan and Anthony Martial will all testify, Mourinho meted out some tough love to many more players than Smalling. As a new manager, coming into a “cautious” environment in almost every respect following the Van Gaal reign, Mourinho’s criticism was a test of the character of his players, who had spent the previous two seasons barely having to think for themselves. Smalling kept his head down and his mouth shut, starting in both cup finals.

There is no smoking gun here, no damning evidence to back up the theory that Smalling should be the fall guy this summer following Victor Lindelof’s arrival. All of United’s specialist centre-backs endured injury problems last term, with Smalling making only eight fewer starts across all competitions than Bailly and six fewer than Rojo. Statistically, he performed no worse than his rivals for the shirt. He made considerably fewer tackles than Bailly, Rojo and Jones, but as Sir Alex Ferguson learned after selling Jaap Stam, those numbers mean little without the necessary context.

One criticism aimed at Smalling is that he is not as comfortable in possession as some of Mourinho’s other defenders. His passing accuracy inside his own half (95.82 per cent) is actually better than the other trio of centre-backs, but that picture is flipped on its head when his passes cross the halfway line, when he finds a team-mate 69 per cent of the time.

Is Smalling therefore a victim of the infatuation with ball-playing centre-halves? He is certainly no Baresi, Beckenbauer, Pique or Ferdinand with the ball at his feet, but as Ferdinand’s old partner Nemanja Vidic has commented, Smalling offers something different, something that is becoming rarer.

“I’ve always loved Chris. I love him because he’s a defender. His mentality is that he likes to defend,” said Vidic last year. “I believe he can still improve but he is physically strong and, as I said, he likes to defend which, for me, is very important. You don’t see many players nowadays who like to defend, there are not many in the world. That’s his big ability.”

Lindelof appears to have been signed to be the Ferdinand to any Vidic in Mourinho’s defence, but this manager, perhaps unlike some, still places huge emphasis on the traditional defensive principles too. Despite the Swede’s arrival from Benfica, there is little to suggest that Smalling’s role would be reduced from last year.

Lindelof still has to prove that he can adapt to the Premier League, and if he does, it still seems completely illogical for Mourinho to trim the number of specialist centre-backs at his disposal, especially when you consider that he used ten different central-defensive partnerships last season, with Smalling featuring in the most-used pairing alongside Bailly.

There are many parallels between Smalling’s situation and that of Jonny Evans. The Northern Ireland centre-half was unable to establish himself as a lynchpin in the United defence, largely because of rotten luck with injuries and a poorly-timed dip in form when his big chance arrived following Ferdinand and Vidic’s departure in 2014. Against the desire of many at Old Trafford, Evans was sold to West Brom for around £6million – an absolute steal.

Evans, two years Smalling’s senior, has shaken off concerns about his susceptibility to injury to make 30 Premier League starts in each of his two seasons at The Hawthorns and has been heavily linked with the likes of Arsenal and Chelsea. Arsene Wenger is also known to retain a long-term interest in Smalling, and if managers with such contrasting philosophies as Pulis and Wenger want you, then Smalling is clearly doing something right.

If indeed the figures being quoted are correct and United are willing to listen to offers for Smalling, then the queue should reach around the block. There seems little sense in selling Smalling at all, but if Mourinho has decided the England centre-back isn not for him, then United should be looking for a similar amount to that they paid Benfica for Lindelof – at least treble the £10million West Brom are reportedly putting on the table.