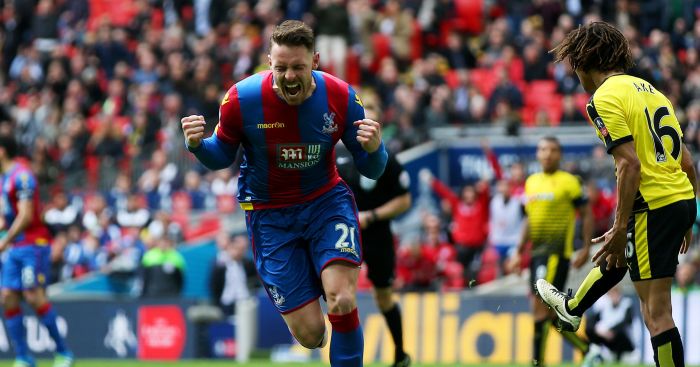 Connor Wickham is determined to justify the faith manager Alan Pardew has shown in him after heading the goal that took Crystal Palace to the FA Cup final.

The young striker has showed promise since arriving last summer for £7million from Sunderland, but, in struggling to provide a consistent goal threat, has done little to turn around their poor form in the Premier League.

But Sunday’s 2-1 Cup semi-final defeat of Watford earned Palace a return to Wembley on May 21, when they will face Manchester United, 26 years after losing to them in the 1990 final,

And, having surprisingly started ahead of Emmanuel Adebayor against in the Hornets and in the knowledge he often scores in sprees, Wickham wants to build on the platform his goal provides.

“The manager’s brought me in with a lot of expectation, which I know I’ve not lived up to, I’ve been injured a lot, but before I had my last injury I was back scoring goals and that’s what I love doing,” said Wickham, 23, whom Pardew has said needs to take greater care of himself to fulfil his potential.

“I’ve got to look after myself, think about my training, my recovery, my preparation, make sure (an injury) doesn’t happen again, because I’ve scored and hopefully it can be a kick-start.

“I hope (I’m over my injuries) more than anyone. I’ve never had so many in my life in one season, but I managed to get myself fit again and back scoring goals.”

Asked if there was any reason Palace could not defeat United in the final, he responded: “No, not at all. Look at Leicester, they’re underdogs at the start of the season, 5,000-1 or whatever it was, and they’re probably going to win the Premier League. So we’re not going to think about underdogs or top dogs, it’s us against them.”

Central defender Scott Dann, who was beaten in the air when Troy Deeney headed Watford’s equalising goal, believes he and his team-mates can make United’s status as favourites work to their favour.

“We are always underdogs against the top teams,” he said. “We thrive off that. Everyone will be expecting Manchester United to win, but we know we are more than capable of beating them. We will be going into it hopeful of winning.

“They have been good at times (this season). Maybe not as effective as the old United teams, but they are still up near the top of the league and are in the FA Cup final, so I would not say it is a bad season for them at all. They have still got top players.”