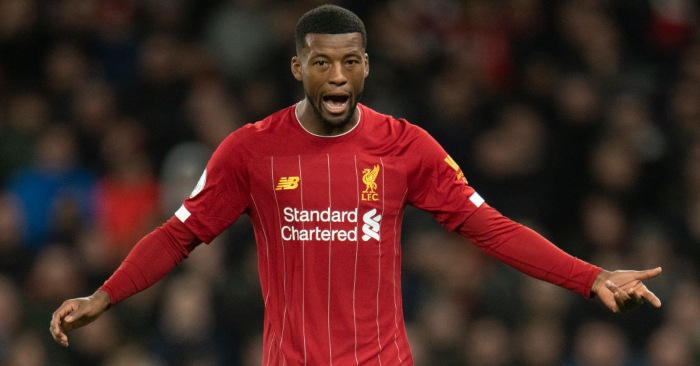 Georginio Wijnaldum says his future at Liverpool depends on “depends on what the club wants”.

The 29-year-old midfielder has been integral to Jurgen Klopp’s side’s march to the top of the table this season with 22 Premier League appearances and two goals.

The Dutch midfielder has 18 months remaining on his current deal, and while other players including James Milner, Trent Alexander-Arnold and Sadio Mane have signed new deals, Wijnaldum has yet to resolve his long-term future.

He is one of only a few players, including Adam Lallana, Adrian, Nathaniel Clyne, Andy Lonergan and Dejan Lovren whose current deals expire in the next 18 months.

It’s understood there are no new terms on the table for the former Newcastle man, who was a £25million buy in in July 2016 and when asked what he would like, his answer was far from conclusive.

“I’m just focusing on bringing this season to a good end and that’s the only thing I’m thinking of,” he told Sky Sports.

“What would I like? It is difficult to say. It depends on what the club wants and how the situation is at that time. We will see.”

When asked if it would be hard for him to leave Liverpool, Wijnaldum added: “Yes, it’s like home.”

Earlier this month the Daily Express claimed Liverpool “run the risk of losing” the midfielder, but the source of the story is David Ornstein.

Ornstein writing in his The Athletic column said Wijnaldum will be available to leave the club for free in 2021 and Liverpool are evaluating the various options, including his potential sale at the end of the season.

Meanwhile, Wijnaldum has backed Klopp’s decision to rest his players for the FA Cup fourth-round replay with Shrewsbury.

Klopp has confirmed Liverpool’s youth players will be involved and he won’t take charge of the match as it falls during the Premier League winter break.

“Since I’ve been in the Premier League I’ve played the season without a winter break but I also know, before I came to the Premier League, how good it is for a player to have some rest,” Wijnaldum told Sky Sports News.

“After the rest you can go again. Your body is more rested than if you keep on going, so that’s a good thing.

“As a player you want to be involved in every game there is but you also have to deal with your body and sometimes your body just says that it is not the right choice to do.

“You just have to see how the situation is but if the manager decides that the younger players are going to play the game then we should accept it.”