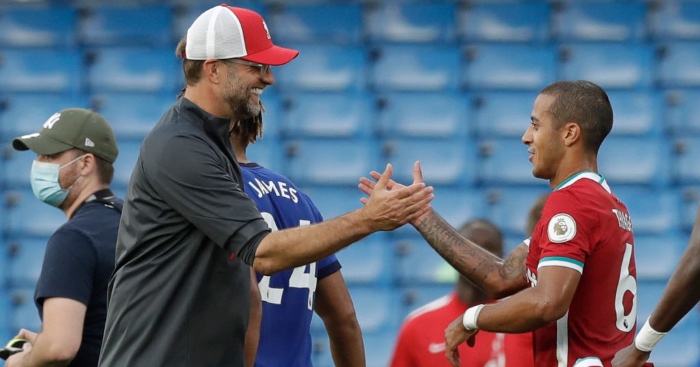 Georginio Wijnaldum claims new signing Thiago Alcantara is the “perfect match” for Liverpool, despite competing with him for a place in the team.

Thiago joined Liverpool for £27million last month and made his debut in the 3-0 win over Chelsea.

Wijanldum – who was heavily linked to Barcelona in the window – has less than 12 months remaining on his Reds contract and it is unclear whether he will remain at Anfield beyond next summer.

The chances of him leaving may have been increased by the arrival of Thiago, though Jurgen Klopp has denied this, as some believe the Spaniard could eventually take Wijnaldum’s place in the team.

But Wijnaldum isn’t focussed on the competition between him and his new teammate, instead revealing his excitement at Thiago’s arrival.

MAILBOX: Time for England to build around Grealish…

When asked about what most impresses him about Thiago, Wijnaldum told Liverpool’s official website: “I saw him play for years now, I played against him when we played against Bayern, and the awareness he has on the pitch, the confidence he has on the ball and the way he manages to let the team play is unbelievable.

“He’s such a quality player that is going to make this team even better than we were before. So, I’m really happy, everyone is really happy, to have him here. He’s also happy to be here.

“I think it’s a perfect match: Liverpool and Thiago.”

He added: “They already showed at their previous clubs that they are really good players and we are really happy to have them here, because they make the squad better.

“With them, we have a bigger squad; I think you need that during a season.

“But the most important thing is that they are quality players and that makes the team even better than we were before. I’m really happy with the signings. They are also good personalities, good people – they totally fit into the team we have.”