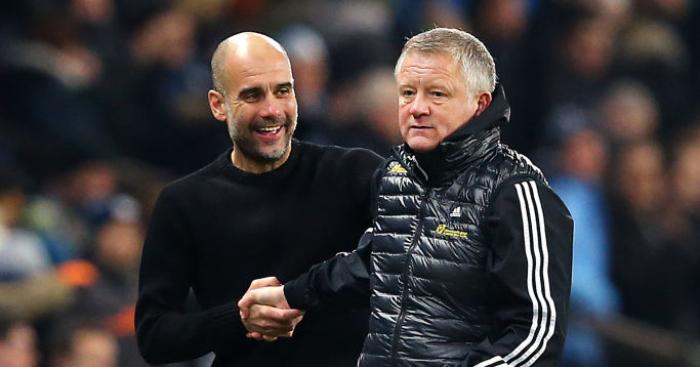 Sheffield United boss Chris Wilder has laughed off suggestions that Manchester City and Pep Guardiola are past their best.

City were well off the pace in pursuit of a third successive Premier League title last season, finishing 18 points behind champions Liverpool, while a potential Champions League triumph was ended by Lyon in the quarter-finals.

Pep Guardiola has enjoyed huge domestic success during his four years in charge at the Etihad Stadium, winning six major trophies, but this term City have started slowly by dropping seven points in their opening five Premier League games.

City have won both Champions League group games so far this season, including a 3-0 victory in Marseille on Tuesday, but former midfielder Dietmar Hamann this week criticised his old club, telling talkSPORT that he thinks Guardiola is lucky to still be manager.

Ahead of his side’s Premier League clash with City at Bramall Lane on Saturday, Wilder said: “There will always be opinions on football but I didn’t see much loss of invincibility about them in midweek when they were playing in the Champions League, if I’m honest.

“If teams don’t win games, especially the likes of Man City, there’s always going to be people offering up opinions on them and doubting players and managers.

“We’ve had it ourselves. From a relative point of view, people will be looking at us and saying, relatively further up the food chain, what they are saying about Manchester City.

“Whether they think they have made a slow start for them, like I think it’s a slow start for us, comes from within. People like to talk about other people’s failings when they perhaps don’t hit the heights from the off.

“An outstanding Liverpool team finished ahead of them in the Premier League last season and we are only five or six games into the new season and, for me, no judgements can be made this early – especially on players and a manager of the calibre they posses.

“But when you are talking about players getting up to speed and hitting form, with world-class players that can happen in a flash very quickly. It takes a lot longer with average players.

“It will be another very tough game for us on Saturday but, as I’ve said before, it’s games like these why we want to be in the Premier League.”

Max Lowe will be back in the Blades squad against City. The defender had to sit out the trip to Liverpool under head injury protocols after suffering a concussion six days previously against Fulham.

Wilder, who is still looking for his first win of the season, continues to be without John Fleck (back), Lys Mousset (toe) and Jack O’Connell (knee).