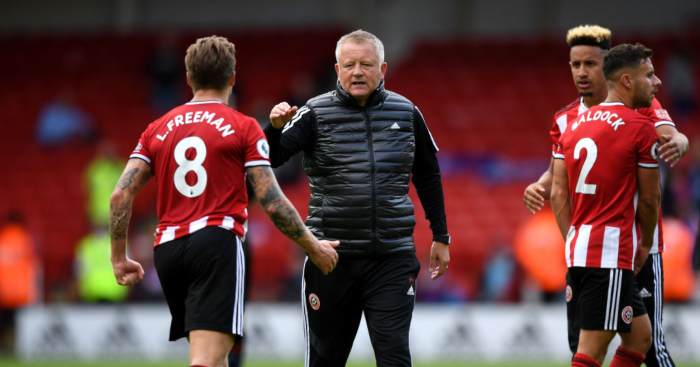 Sheffield United boss Chris Wilder insists his players will not be star-struck and looking to swap shirts with Jurgen Klopp’s Liverpool side.

The Reds are on the crest of a wave at the moment, winning their last 15 Premier League matches stretching back to last season.

Klopp’s team have made an impressive start to the new campaign and have already opened up a five-point lead at the top of the table.

Some of Wilder’s squad are either from Liverpool or support the Reds, including John Lundstram and Jack O’Connell.

While the Blades players are particularly relishing the prospect of playing the European champions in the Premier League at Bramall Lane on Saturday, Wilder said: “I don’t want our players to look at them all starry-eyed.

“Of course, playing the best team in Europe at Bramall Lane was always going to be one of the fixtures to look forward to when we got promoted back to the Premier League.

“It’s a reward for the supporters, who have stuck with us through thick and thin, and the challenge for us now is to make sure this becomes a regular fixture in the Premier League.

“But I don’t want the players speaking to their players before and, ‘can I swap shirts and any chance of signing this?’. And they won’t.

“We are playing them on a level playing field in the Premier League and we deserve to be here. Of course there’s enormous gaps between the both clubs at the moment and we’re trying to make that gap a little bit closer.

“I don’t want Liverpool to come here into our backyard and go, ‘well, thanks very much that’s the easiest three points we’ve picked up all season’. If they do win, I want it to be over our dead bodies.”

The Reds have netted 17 times already this campaign and Wilder joked that the Blades may need some extra assistance in defence to contain an attack that also includes Roberto Firmino.

“We’ve been playing with a back three but it might turn into a back 10!” he said.

“They’ve caused better sides than us untold problems in terms of the way they move the ball around the pitch and the way they attack with pace and quality, so we know we will need to be at our very best.

“Most people will have it down as an away win but we have to find ways to hurt them and cause them problems and be positive in our own approach.”