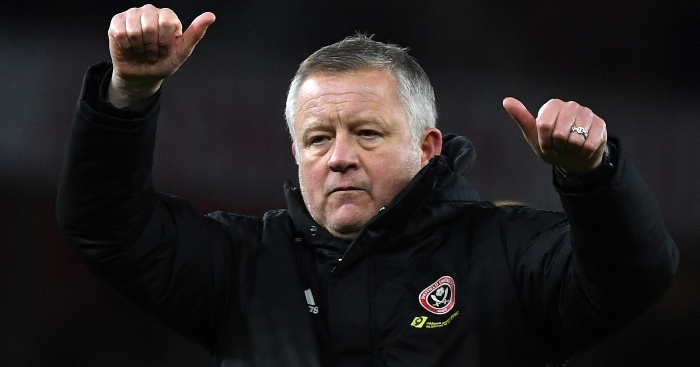 Sheffield United boss Chris Wilder played down any feelings of disappointment after his team dropped points in their pursuit of a top-four place in the Premier League.

The Blades had to settle for a 1-1 draw against Brighton on their return to action as hopes of European football next season were dealt a minor reality check at Bramall Lane on Saturday.

Wilder’s men had spent their winter break in Dubai, while their rivals had failed to stamp any authority on or make any notable headway in their absence in the race for the Champions League spots.

It looked like they were on their way to matching Chelsea’s win against Tottenham earlier in the day when Enda Stevens blasted them in front. However, Neal Maupay, a summer transfer target for the Blades, quickly equalised.

The hosts dominated the second half but were unable to find a winning goal. However, Wilder had nothing but praise for his players.

“It’s only a very, very slight tinge of disappointment, that’s all that is. The players couldn’t have given me anything more and couldn’t have done anything more. The drive was brilliant,” said Wilder, whose team stay sixth, level on points with Spurs and four behind Chelsea.

“It was disappointing, obviously, to concede after going in front. We found a way two weeks ago against Bournemouth but unfortunately today we couldn’t find a way.

“I thought we moved the ball around really well and I enjoyed watching my team play. I said to the players I was absolutely delighted with what I saw. A draw doesn’t hurt me at all.

“I said before the game this wouldn’t be easy. I know how tactically astute Graham (Potter) is and how good his team is. They will be pleased with a draw – as we were pleased to win at their place after they had most of the ball.

“It’s one defeat in 20 or so Premier League matches – taking Liverpool and Manchester City out of it. Consistent performances. It was a good performance after us being away on the winter break.”

Stevens opened the scoring after 26 minutes with a superb strike from the left side of the penalty area, arrowing the ball into the top corner after taking a touch to steady himself. However, the Republic of Ireland international had to go off at half-time with an injury.

Wilder said: “It’s quite a decent goal from our boy. I think if he’d had another shirt on and played for a more glamorous club then people would be looking at that goal right the way through the weekend, it was a fantastic finish.

“But he flagged up a tight calf just before half-time. Hopefully we will assess him and he won’t be out for too long because he is an important player.”