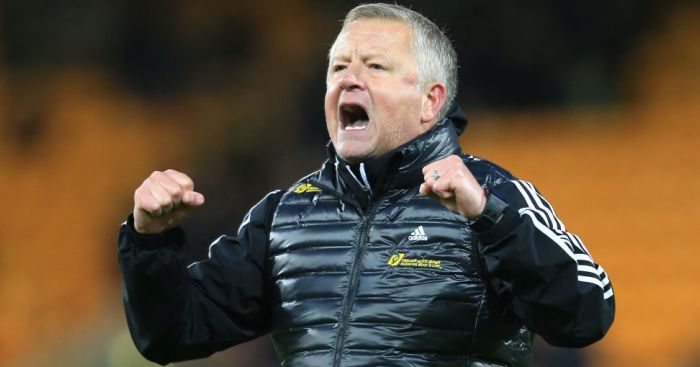 Sheffield United boss Chris Wilder insists it will be “full tilt” in both the Premier League and FA Cup for the Blades as they challenge for European football in the remaining weeks of the campaign.

Wilder’s side have been a revelation this season. Many tipped them for an immediate return to the Championship following promotion but the club’s first top-flight campaign for 12 years has been a resounding success so far.

The Blades are eighth in the Premier League, just five points behind fourth-placed Chelsea with a game in hand, and are through to the quarter-finals of the FA Cup, where they will host Arsenal later this month.

Asked if one competition might take priority over the other, Wilder replied: “No, it’s full tilt at both, 100 per cent and on to the next game.

“It has to be that way. It’s all to play for. There’s 11 league games and hopefully a little bit longer in the FA Cup would be fantastic for the football club.

“We’ve been out of the spotlight for quite a while now and I’m glad that we are doing everybody proud in terms of our performances in the league and cup competitions.”

The Blades host Arsenal at Bramall Lane in the cup – a team they have already beaten at home this season en route to winning four Premier League points against the Gunners.

However, Wilder insists league form will count for little when the two teams meet again.

He said: “I’m happy with the draw. Our ball came out straight away, which was great, and a home tie. If you look at the quality of the teams left in the competition and their league positions, I’m happy.

“At this stage of the competition it was always going to be a tasty tie so to get it at home was all we could ask for.

“It’s a great game for us to look forward to. They have picked up since Mikel (Arteta) went in and I know we had a great result, and a great night, against them earlier in the season but that counts for nothing.

“They are looking for silverware as much as any team are and it is going to be a great atmosphere and a great occasion and hopefully a great performance by my team. It’s a great incentive to take that next step forward and progress.”

Before that, Wilder’s team host bottom-of-the-table Norwich in the Premier League on Saturday and the Blades boss is looking forward to renewing acquaintances with their Championship title rivals from last season.

“It’s a tough game, I have a huge amount of respect for Daniel (Farke) and his work. We’ve had some good battles with them and we know what they’re about and so do they with us,” he added.

“They will come here in great spirits after a fantastic result (at Tottenham in the FA Cup) last night and we know what to expect from them and it will be a test for us.”