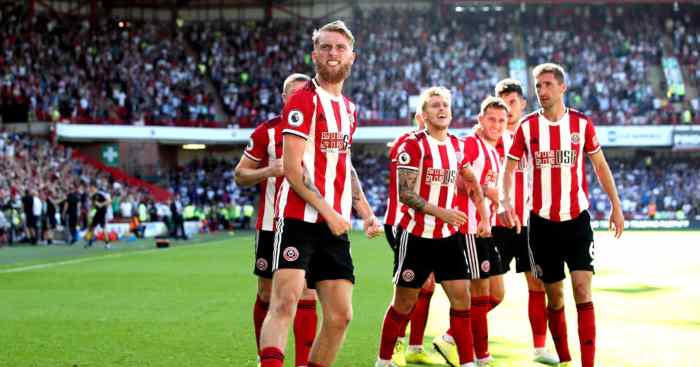 Sheffield United boss Chris Wilder has played down comments made by striker Oli McBurnie in which he appeared to question his commitment to Scotland.

The 23-year-old, the Blades’ club record signing, was captured on camera in the players tunnel prior to the EFL Cup tie against Blackburn on Tuesday night allegedly saying he hoped he would not be called up for his country because it was s****.

A video of the clip appeared on social media and has attracted criticism from fans of the Tartan Army.

However, McBurnie’s father has since said the comments were taken out of context and his club manager has also insisted he remains committed to his national team.

“For me it’s nothing, it’s something that has been blown out of proportion. From my dealings with Oli he is as proud as he can be to play for Scotland,” said Wilder.

“When you’ve been involved in a changing room as long as I have, from the age of 15 to 51, you see all sorts of things get said – some serious and some in jest.

“When you look into it and the banter that the players have between themselves, in that corridor there were four Irish lads, a lad from Nottingham, one from Glasgow and Oli McBurnie.

“You can try to make something of it, but to me it’s nothing. Things shouldn’t always be taken at face value, especially in that kind of environment when there are wind-up merchants about.”

Here's what his manager Chris Wilder had to say about it… pic.twitter.com/ZLip4cmHch

McBurnie qualifies to play international football for Scotland through his dad’s family who hail from Glasgow.

He progressed through the youth ranks and has often spoken of his pride at playing for Scotland.

“Oli has represented Scotland at all levels and is proud to do so – his name gives quite a bit away!” said Wilder.

“One of the things I said to him when he came to Sheffield United was regarding the national side and hopefully him producing performances for us in the Premier League will give him more of an opportunity to play for the national side.

“I’ve had personal chats with him too. When he was living in Leeds there was talk of him supporting Leeds but I’ve had chats with him and it’s always been Rangers and Scotland.”

McBurnie scored his first goal for the club during the Blades’ 2-1 defeat to Leicester and he made his full debut in the cup win against Blackburn.

Asked if he could hand the striker his full Premier League debut at Chelsea on Saturday, Wilder said: “I’m not going to give my team away but he certainly has a chance.

“Chelsea will be another tough game but we want to be competitive and it’s for games like this why we wanted to be in the Premier League.

“Chelsea are an historic, outstanding football team who finished in the top four last year and won a European trophy.”