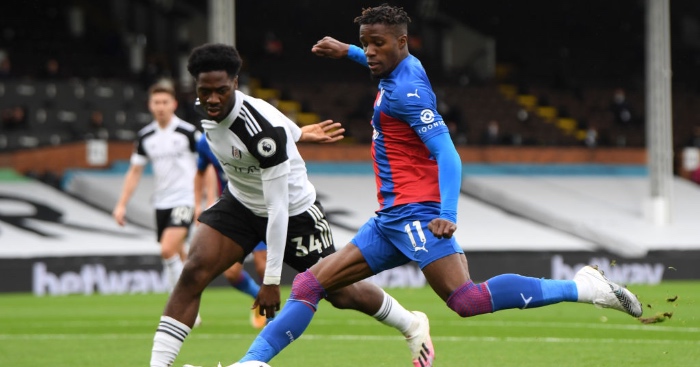 Crystal Palace manager Roy Hodgson believes Wilfried Zaha is an ‘excellent player’ who ‘deserves praise’ after he scored in their win over Fulham.

Palace went ahead in the eighth minute thanks to a close range effort from Jairo Riedewald.

After going into half time ahead, Palace doubled their lead in the second half thanks to Zaha.

READ: Partey will be ‘very important’ for Arsenal, says Aubameyang

Their talisman got on the end of a brilliant Michy Batshuayi cross to slot the ball home. However, he injured himself in the process and had to be subbed off.

That goal proved to be the difference, as Fulham’s Tom Cairney scored a stunning late strike to bring them close.

Fulham were ultimately unable to score an equaliser.

Speaking about the performance, Hodgson told reporters: “You’re going to be disappointed when things don’t quite go your way. Today we’ve conceded another injury-time goal, but throughout the 90 minutes I thought we were very good value for the three points.”

When asked about Zaha, he said: “He’s an excellent player and that’s what he’s capable of doing. If ever I sound mildly critical he thinks I’m picking on him, but every press conference I go to he’s the only player they want to talk to me about!

“He deserves all the praise he’s going to get. He reminds us that when he’s on top of his game he’s a very hard player to stop.”

The result means Palace move into fifth in the Premier League table, although other teams could catch up with them tomorrow.

They’ve started the campaign well and have been promising in attack.

Zaha has now scored five goals and assisted one more in his first six games.

He continues to prove himself as arguably Palace’s most important player.

Their next game is against Wolves in the Premier League on Friday. A victory could see them break into the top four.