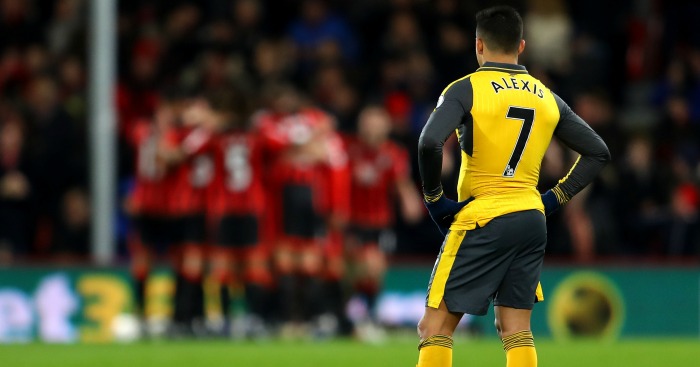 “What kind of message does that send to the rest of the Premier League, Aaron?”

Aaron Ramsey’s answer was unfortunately lost in my laughter at that question from the Sky Sports interviewer, excitedly talking to Ramsey and Man of the Match Olivier Giroud as if they had achieved something rather more impressive than rescue a point from the jaws of devastating, comprehensive defeat.

So we will have to provide our own possible answers.

The message that Arsenal are capable of being gut-wrenchingly awful for large swathes of almost any match?

The message that certain players will point aimlessly at unmarked opposition full-backs rather than take personal responsibility to cover the ground themselves?

The message that their rather expensive central midfielder is likely to make an utterly brainless decision just minutes after the opposition has taken the lead?

The message that Arsenal’s players are likely to turn on each other while under pressure rather than unite in the common cause of making sure that disaster does not reach its full potential?

The message that some Arsenal players will wildly celebrate a late equalising goal while others will curse, throw down their gloves and wonder if there are other clubs that don’t make such hard work of essentially staying in fourth place?

The message that some players inexplicably retain their manager’s faith despite being considerably more hindrance than help when things start going awry?

The message that, once again, there is ultimately nothing to fear from this Arsenal side?

“We refused to lose the game,” said a proud Arsene Wenger, but for 70 minutes, Arsenal looked like a team refusing to play any part at all. He used the word ‘resilience’ and the Sky Sports pundits talked endlessly of ‘character’, but would Chelsea have found themselves 3-0 down and needing to find ‘resilience’ and ‘character’? Would the most recent incarnation of Manchester United? A 20-minute burst of ‘character’ has earned them a point, but 70 minutes of listless, fragmented, lazy, naive football has lost them two.

To Bournemouth this draw will feel like defeat, but it absolutely should not feel like victory to Arsenal. Having watched Liverpool and Manchester City drop points over a punishing New Year, they could not afford to be sloppy; Bournemouth are not Crystal Palace or Hull, they were always going to press and harry and make life incredibly uncomfortable. Eddie Howe is too clever not to have watched Everton rattle Arsenal with aggression, width and pace and plan more of the same.

We attracted extensive criticism this week for making Jurgen Klopp our early loser after his Liverpool side dropped points at Sunderland; we wonder what the reaction might have been if Arsenal’s dropped points had come on the same night and we had given the title to Wenger. The end result is the same and yet a comeback can obfuscate; it’s tempting to credit Arsenal for their resilience and their manager for bringing on Lucas Perez, whose energy contributed to the turnaround.

But this is an unforgiving title race and, by extension, fight for Champions League places, and those two dropped points could be the difference between fourth and fifth, between a future under Wenger or another manager and between Alexis Sanchez or a search for an inferior replacement.

What message does it send? That once again Arsenal are celebrating being not quite good enough, and that may no longer be enough for some.