Home Mailbox Will Foden be Lampard or Sidwell? Pogba or Pacheco? 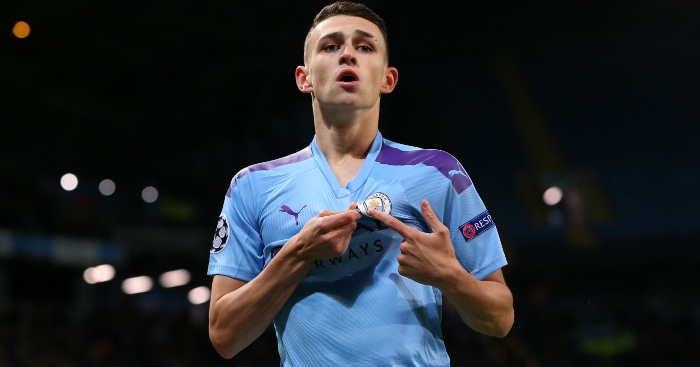 Are we all too sad to write any mails? Dust yourselves down and send your thoughts to theeditor@football365.com…

Big Rom’s revenge
Before the relegation of Champions Leagues cast offs to their step sister, United were favourites for the title. But I fear what is going to happen now is Inter knocking United out with Lukaku scoring the winner. For Lukaku, that will be the ultimate revenge on United.
Adeel

What is Foden?
Here’s a weird question about Phil Foden. In the grand scheme of things will he think this time under Pep helped or hindered his career? I’m not doubting that Pep and his staff probably represent one of the best coaching teams in world football when I say this, I’m sure that part of things is great.

He’s obviously quite good at football but right now nobody really knows how good he is. In five years time he might be dominating a midfield for a top team but perhaps he’ll see this as a time he wasted waiting for an opportunity that was never going to present itself. Or maybe this will turn out to be the peak of his career; people wondering how great he might be if only he got a chance. If it turns out he’s not good enough the myth of Phil Foden might help him get a big contract at a smaller club when he moves on.

I guess in a way he’s either going to be Frank Lampard or Steve Sidwell at Chelsea, although I appreciate that’s not a perfect analogy. If he leaves and goes elsewhere he’s either Paul Pogba or Dani Pacheco.
Minty, LFC

Not all doom and gloom
Considering the election result and being an Arsenal fan, it’s been a difficult 24 hours which has been spread across a difficult three years and can be extended to a decade that’s not been what I hoped.

However, seeing as I’m sick of wallowing and this is a football website, I’ve decided to look at what the positives are for Arsenal and why there’s hope moving into the next decade.

Lot’s has been said about the current playing squad. Some will state it’s not fit for purpose and has huge deficiencies that will see the club continue to struggle and the rot be irreversible. Personally, while there have been signs of ‘same old Arsenal’ (and no, not the good version) this season I think we’re all quick to forget at how optimistic we were in the summer and with the signings. Yes, I got carried away with myself and said we could finish third, but in all honesty a top 4 finish with this current squad and a competent (more on that later) manager could see this being a squad that will go places. Football fans have short memories and it is definitely worth casting our eye back to the state of Liverpool and their squad before Klopp came in.

Secondly, a new manager is imminent. The options are far and wide, from the fanciful Simeone (stop laughing), to the untested but undoubted potential of Arteta, to the been there, done that of Ancelotti. Arsenal fans complained for years about Wenger and his need to go. While I was never convinced on Emery like many other fans, it was someone new. We talk a lot about how any manager would have struggled replacing Ferguson at United and while the levels of success weren’t the same, the familiarity with Wenger meant it was always going to be tough under the anyone after Big Weng left. As long as the board get the appointment right and give them the space to breathe and tools required to shape this squad then I think we can expect to see things improve, and improve quickly. You can point to the Puel / Rodgers axis for an example of this. Most Leicester fans were unhappy with Puel and the direction of the club. However he made a number of signings that are now the spine of the team. Rodgers coming in and adding his knowledge and experience to it has seen them turn from potential relegation candidates to title contenders in under a year. We have the squad to do similar, we just need the right man in there to steer the ship.

The board. Ok, so this one is harder. BUT after years of feeling ignored and feeling as though the board doesn’t care about the fans, there are at least signs they’re listening. The ‘We Care, Do You’ movement in the summer saw an unprecedented amount of spending, and when the voices of discontent were heard in the stand and again, the WCDY group organised, and the Kroenke’s pulled the trigger. Yes it may be blasé, and yes it make take longer than we like but it’s small steps which through an Arsenal lens is huge. We just need to hope that it continues to grow and the board continue to listen to the fans.

Finally, and I think most importantly we have the sauciest kit in the league and the club even re-released the bruised banana that is so popular. We may currently be shit on the field but at least we look the part before it all falls to pieces.

Things could be better, but they could also be much worse. We have a good squad, a lot of youth prospects with potential coming through, a new and hopefully revolutionary manager in the offing, a board more willing to listen than before and did I mention the sexy kits?

Anyway, I’m off to try and maintain this level of optimism as much as possible before the inevitable crash at approx. 4:45pm Sunday
JDF (Bringing Santi back would be wonderful, I watched him vs Barcelona at the Camp Nou earlier in the season and the home support cheered his goal like it was one of their own), London

No, that’s not it
Ahead of the weekend and after last night, I just had one football-related thought. For everyone’s blustering about all the reasons they hate Liverpool, just take a look at the election map last night and you’ll see why they REALLY hate us.

Up the Reds.
Kris, LFC, Wirral

A timely boost
Just when I thought the next 5 years were looking thoroughly bleak, Klopp goes and signs a contract until 2024. Maybe the future won’t be so bad after all.
Mike, LFC, London

…Sometimes in football you don’t need a Russian oil tycoon, or an Arab Billionaire. What you need is a German with an infectious personality, a football brain far greater than he is given credit for and clear vision of how the game should be played.

God Jurgen, I realise how lucky we are to have you every day, so glad it’s going to continue for at least another four and a half years.
Ryan, Liverpool

…Hearing the news this morning that Klopp has extended his contract to 2024 is like waking up on Christmas morning to the best present you can imagine but you didn’t even know it was Christmas.

The most important signing we could have made this season.
Rory (5 more years!!) Ireland

Big (NPL) Weekend
As listeners to the Totally Football League Show will know, anyone who gets sent off and receives a three-game ban will be suspended until 2 January, in the Jack Lester style.

*Further down the pyramid, there are some interesting fixtures in the Northern Premier League. With South Shields playing in the FA Trophy, Lancaster City and Basford United will both have a chance to temporarily take top spot, but neither will have it too easy: City host Stalybridge Celtic (5th) at the Giant Axe, while United travel to Cantilever Park to take on Warrington (4th). These have to be among the best ground names in the country.

*At the other end of the table, Ashton United (19th) host Stafford Rangers (21st). United have just one home win all season, while Rangers have just one away win. Their squad features Jake Charles, grandson of the legendary Welsh star John Charles.

*Two other teams on the fringes of the playoff picture meet in Greater Manchester, as Jon Macken and Frank Sinclair’s Radcliffe FC host Witton Albion. Radcliffe have been steadily rising since the low point in September of being thumped by Grantham, a game in which Sinclair was sent from the dugout. Albion meanwhile stayed in contention with a victory over Grantham last weekend.

*Speaking of the Gingerbreads, they host Morpeth Town tomorrow afternoon, in a midtable clash. Both teams have slipped away from the playoffs in recent weeks, in Town’s case because of their terrible away form, but the Highwaymen have between three and seven games in hand on every other team in the division. Grantham lost a League Cup game on penalties in the week; since 2015-16, they’ve been eliminated from knockout competitions 12 times and lost their next league game six times. However, the last time they lost a penalty shoot out, they won their next fixture. Admittedly that was in preseason, but you never know.

Enjoy your weekend everyone,
Ed Quoththeraven (what did people think the T stood for?)