Home Mailbox Will Lampard get Klopp time to build a Chelsea side? 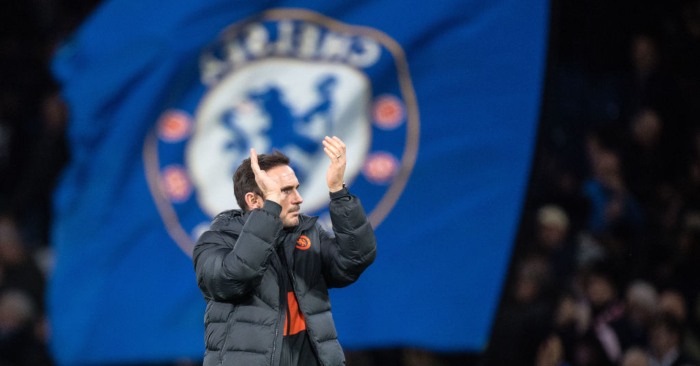 We got actual mails about Chelsea! Get in. Send more to theeditor@football365.com

Loving life as a Blue right now
I love Winty, but I thought her piece on Lamps and his Chelsea team was a bit off.

Firstly, no-one except one deluded clickbait journo has dubbed Frank the new Fergie, because it’s patently ridiculous. Secondly, writing that they were ‘gifted an early penalty’ when correctly awarded one and ‘handed [the comeback] on a plate’ when four yellows were seemingly correctly awarded is inferring the ref was somehow guilty of favoritism towards the Blues, which he certainly was not. Ajax are a stunning attacking team, but evidently their defense and their behavioral discipline need work (Chelsea obviously requiring a healthy dose of the former too, no argument).

But what I really wanted to write about is that it really doesn’t matter. Chelsea probably won’t win anything this season, but that was never an expectation anyway. They may not win anything for the next year or two, but I honestly couldn’t care less. This is a team in transition that is already playing better than many CFC fans (apart from the internet divs) had hoped for. Yes, it’s a bit Keegan-era Newcastle, we’ll-score-one-more-than-you football which leaks goals all over the place, but like that team that surrendered a 16-point lead one season, they’re bloody great to watch.

I’m loving this young, talented Chelsea side and our intelligent, dedicated but inexperienced manager – I just hope he gets the time to build a dynasty without the intense pressure to win instant silverware, as Klopp has been allowed to at Liverpool.

Win or lose, Up The Blues!
Sweeters, CFC

What a thoroughly miserable piece after such an enjoyable game.

The officials got it wrong…
So about that Chelsea – Ajax match. I think the referees played that double red card incredibly poorly if they were exercising their own judgment, but if they were truly following the letter of the law, then the rules are broken.

At least in theory, if you punished the first foul on Blind when it happened, then the handball in the box would never have occurred. I think from a pure fairness perspective, in a situation like that the refs should only be allowed to punish one of the acts with a card unless both involve straight up thuggery. A single call to play on shouldn’t benefit one team THREE times! What an absurd result.

Some Chelsea conclusions
Before I start these, I should mention that I haven’t had a chance to re-watch any of the highlights so some objectivity may have been lost in the heat of the game…if people disagree please do write into this afternoon’s mailbox since we don’t get enough Chelsea discussion here.

1) What a bonkers game of football. Genuinely one of the craziest I’ve ever watched. It’s rare that you finish watching a game feeling both very lucky to have drawn and very disappointed you didn’t win.

2) The decisions. I’ll take the big ones in turn. Our first penalty feels like a long time ago now so I’d happy take someone else’s opinion on it, but my feeling at the time was that it was quite hard to figure out exactly what happened and it was a classic ‘seen them given’ type penalty which feels a bit lucky but not necessarily unfair. On the red cards, I think the Blind one was completely justified, and he should be disappointed to have gotten into that position. However Veltman can feel very hard done by. I’m not sure of the exact handball rule but I can see why he was aggrieved at giving that away, and I don’t see that he deserved to be singled out when everyone was surrounding the ref. With the pen, as I said, if it is legit given rules then it should have been given, even if the rule feels morally unfair. With out ‘winning’ goal that was ruled out, it was frustrating to see but couldn’t exactly be not given after previous decisions. Overall Ajax should feel hard done by and very aggrieved that they didn’t win this, not that I’m complaining.

3) In some ways his game summed up our season. We had some beautiful attacking play, while being let down by the finish on a few occasions. We had way too many nervy moments trying to defend against Ajax’s pinpoint crossing. We need to either cut out conceding the silly fouls, or get better at defending those crosses. Ideally both. Overall it showed what we already knew – we are a work in progress and Frank needs to work on the defence. Rudiger can’t come back soon enough.

4) Alonso. My God was he bad. No one really covered themselves in glory in the first half but he stood out as our worst player by a mile. Couldn’t defend, couldn’t cross, gave away unnecessary fouls. Cannot wait for Emerson to be fully fit again so he can go back to riding the bench. Props to Lampard for addressing this and bringing James on. He wasn’t perfect but he was a massive upgrade on Alonso, albeit on the other flank.

5) I guess the most damning thing about our performance is that I wasn’t even too upset about having about half the correct amount of extra time added on since they looked as likely to score the winner as we did. We really did miss an undeserved opportunity to take control of the group, which is now finely poised with us, Ajax and Valencia all vying for qualification.

Overall, it was a bloody entertaining game and a very lucky result for us so I can’t complain too much.
Dom, CFC

…Well what a boring game of football, only the eight goals, 2 own goals, 2 red cards, a comeback from 4-1 down, a VAR Disallowed Winner oh and an insane free kick from Zyiech, all I can say is, this is why we love and watch football, I’m coming away from this game thinking both “How did we not lose this game?” And “How did we not win this game?”

Where did all the time go?
I realise there are more trendy topics in football right now, but WTF was up with only four minutes added time in the Chelsea v Ajax game?

In the second half there were two heavily argued red cards, three VAR reviews, four goal celebrations and four subs including one injury. The Jorginho pen alone took four minutes to take!

A lot of the issues in football are hard to get right. This simple area shouldn’t be one of them.
James, CFC

Rewarding the goals
​Having thoroughly enjoyed Arsenal v Liverpool last week and Chelsea v Ajax last night it reminded me how entertainingly bonkers football can be with a bucket load of goals and it sparked a thought. This is in no way fully thought out although having run it past a couple of colleagues this morning it may not be one of the worst ideas in the world.

I’ll caveat this by saying I find football entertaining in its current guise and am not necessarily a proponent of the ‘football needs more goals’ club. However who doesn’t love a 3-3 or 4-4. Therefore – and let’s talk about it in the context of the Premier league – how about teams that share a score draw of 3-3 or higher both receive two points?

That’s it! Please bombard me with all the holes in this well crafted, thought out goal inducing strategy.
Banjo, Prague

On the filth of Barca
Even though I’ve always followed the EPL right from a young age, I’ve always been a Barcelona fan.

I’ve always read how Arsenal and Man Utd fans are angry at the way their team plays, the terrible tactics of their managers, players playing terribly…

…I couldn’t relate until yesterday when Valverde made me feel things I hadn’t felt before.

Sometimes I feel his tactics is just Messi and “Jesus take the wheels… ”
Nelson, Lagos, Nigeria

Emery cocked up on Xhaka
Well, they’ve gone and done it -stripped Xhaka of the captaincy. He reacted to abuse from the crowd and I don’t blame him.

I love Patrick Vieria but he did some pretty stupid things on the field, while Mr Arsenal Tony Adams was done for drink driving and neither were stripped of the captaincy. And why would this be? Because they were both brilliant players and leaders on the field.

I genuinely hope Xhaka can leave Arsenal and enjoy his football elsewhere as it will be better for all parties.

This one’s on Emery for giving the captaincy to a player who shouldn’t have been in the team in the first place.
Graham Simons, Gooner, Norf London