Home F365 Features Will Pulisic be more Aubameyang or Kagawa? 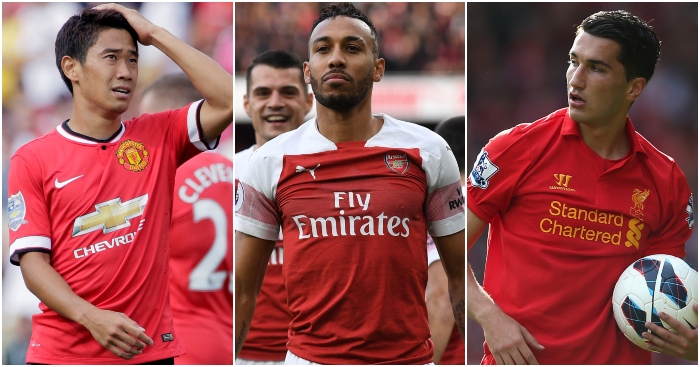 Christian Pulisic will become the latest Dortmund star to try his luck in the Premier League when he moves to Stamford Bridge in the summer. The Blues will be hoping he’s more successful than most on this list of the last ten Dortmund players to move to these shores…

Sokratis – Arsenal
The big Greek centre-back has actually improved the Arsenal defence, which may perplex anyone who has seen how wretched Unai Emery’s rearguard has been at times recently, especially at Anfield. But Liverpool’s attack have made mugs of many more opponents and Sokratis has brought some solidity from Dortmund, where he started all but four Bundesliga games last season. The likes of Mo Salah might run past the 30-year-old but no one will run through him, which is more than can be said of many of his predecessors in the centre of Arsenal’s defence.

Pierre-Emerick Aubameyang – Arsenal
The Gabon star is the biggest deal on this list thanks to the £56million Arsenal paid Dortmund last January and he is perhaps the only undoubted success. Aubameyang currently leads the race for the Premier League Golden Boot, while only 10 strikers scored more goals in Europe in 2018 – and the Arsenal striker did not get going until February.

14 – Arsenal's Pierre-Emerick Aubameyang is the outright top-scorer in the Premier League this season, with 14 goals in 21 games. Potent. pic.twitter.com/iycVHJVIwp

Henrikh Mkhitaryan – Man Utd
The playmaker showed occasional glimpses in 46 starts of why United paid Dortmund big money but he certainly lacked the consistency to be a mainstay with the Red Devils and perhaps the mentality to truly thrive on the Old Trafford stage.

Shinji Kagawa – Man Utd
As above. Exactly as above.

Ilkay Gundogan – Man City
The Germany midfielder was Pep Guardiola’s first signing for City when he moved from Dortmund for £21million in June 2016. Despite his fitness problems, Jurgen Klopp wanted Gundogan at Liverpool but the player opted to join up with Guardiola instead. A knee injury knacked his first season at the Etihad but Gundogan played his part in last season’s title success, making 48 appearances in all competitions, though 19 came off the bench. His contribution was enough to catch Barcelona’s eye, though Guardiola still only chooses Gundogan to start half of City’s games.

Nuri Sahin – Liverpool
“I have left Brendan Rodgers, thanks be to God,” said Nuri Sahin when reflecting on his premature exit from Liverpool. The former Dortmund star was on loan at Anfield in 2012 from Real Madrid, where he had moved from Dortmund the previous season. But dismal spells away from the Westfalenstadion convinced Sahin that he only wanted to play for Dortmund with Klopp, so he returned there in January 2013, halfway through his spell with the Reds. At Liverpool, Sahin played only seven games. “Rodgers wanted me to play as a No 10. But I do not play behind the forwards,” he explained. He didn’t play much anywhere after re-signing permanently for Dortmund in 2014.

Andre Schurrle – Fulham
The former Chelsea striker returned to west London this summer from Dortmund via a stop at Wolfsburg. As one of their army of new arrivals, Schurrle got off to a decent start at Fulham, scoring five goals in his first 13 games back in the Premier League, but the 28-year-old hasn’t netted since Claudio Ranieri’s first game in charge. The 57-cap Germany international still has a season and a half remaining on his two-year loan deal before presumably adding to the £70million he has fetched in transfer fees.

Andriy Yarmolenko – West Ham
The Ukraine international was just getting into his stride at West Ham when his season was cruelly ended by an Achilles injury. Yarmolenko’s first start came in West Ham’s first win of the season after they lost their opening four matches and the form the £17.5million winger was beginning to show indicated that it was not a coincidence. Still, one man’s misery is another man’s fortune, isn’t that right, Samir?

Mikel Merino – Newcastle
The Spanish midfielder squeezed a lot into a year at St James’ Park. He arrived initially on loan from Dortmund but after stringing together a few decent performances in Rafa Benitez’s engine room, Newcastle opted to make his move a permanent one, giving Merino a five-year deal for around £8million. Then it all unravelled in similarly swift fashion. Merino picked up a back injury and upon his return, he could not shift Jonjo Shelvey or Mo Diame out of the side. He made just one Premier League start during the second half of last season before the 22-year-old was shunted on to Real Sociedad for £10million.

Erik Durm – Huddersfield
The former Germany international left Dortmund for free in the summer after failing to play any football last season and missing large chunks of the previous campaign owing to a series of injuries. Huddersfield took a punt on the World Cup winner, who has played at full-back and in midfield on both flanks in 15 appearances, including 10 starts. He hasn’t been able to prevent Huddersfield slipping to the bottom of the table but if he can stay fit for the rest of the season, the Championship probably won’t be his problem next season.