Home F365 Features Will Setien even last the season at Barcelona? 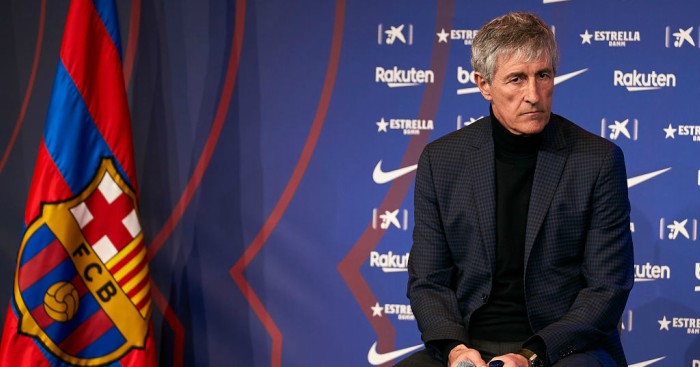 Sacking your manager when you’re top of the league is certainly a strange thing to do, but in this case what’s even more strange is that it was neither surprising nor particularly unjust.

A large number of Barcelona fans have been calling for Ernesto Valverde’s sacking for some time, particularly since their scarcely believable capitulation against Liverpool in last season’s Champions League semi-final.

It was inevitable he would go at some point, but the timing is perhaps the most surprising aspect of it all. Why now?

Well, Barça are in a difficult run of form by their standards. They have drawn three of their last five matches, dropping even more points after having lost three eminently winnable games earlier in the season. Real Madrid are now level on points, and seem to have momentum behind them following their recent win over Getafe and their victory in the Supercopa de España.

Barcelona’s semi-final defeat to Atlético Madrid in the Supercopa turned out to be Valverde’s last game in charge. It’s not a competition that the club values enormously, but defeat in Saudi Arabia seems to have been the straw that broke the camel’s back.

It became clear in the days following the Supercopa defeat that Barcelona were looking around for someone to replace Valverde, and the whole thing was handled in a characteristically clumsy and undignified way by the Barcelona suits.

First, it looked as though Xavi would take over. As one of the Catalan side’s greatest ever players, he would certainly be a hit with the fans, and it appeared initially that he was keen. He later backtracked, saying that he wanted to stay with Qatari side Al-Sadd for the time being.

The next port of call was Ronald Koeman, who said he couldn’t answer Barcelona’s call as he was focused on trying to lead the Netherlands to glory at Euro 2020.

The likes of Gabriel Milito, Thierry Henry and Mauricio “I’d rather work on my farm than manage Barcelona” Pochettino were mentioned as possible candidates, before Barcelona rather hurriedly settled on the out-of-work former Las Palmas and Real Betis boss Quique Setién.

In terms of tactics and style of play, Setién seems a good fit for Barcelona; probably a better fit than Valverde ever was.

Known for his adventurous, attacking philosophy, he will at least give Barcelona fans the entertaining football they crave after their style has listed somewhat in the last few years.

But whether it will be entertaining AND successful is quite another matter.

Barcelona fans demand both, and having tasted glory in recent times, they have extremely high expectations – far higher than the Betis fans who eventually turned on Setién, contributing to his sacking at the end of last season.

As manager of Betis, his team were famous for scoring a great deal but conceding a lot too. It was fantastic to watch, but didn’t bring his side much success. His first season in charge at the Andalusian club saw them finish sixth, qualifying for the Europa League, but the following season failed to match the heightened expectations, and they ended up in tenth place and Setién was sent packing.

His style of play was perhaps too bold for the relatively limited squad that he had at Betis. He’ll have a far deeper well of talent to draw from at Barcelona, but managing big names and big egos will present challenges the like of which he has never faced before.

He has never won anything as a manager, and there will be concerns that the job could be too big for him. He seemed in awe at his unveiling, saying “never in my wildest dreams did I imagine I would be here” and “I never thought Barça would go for me, as I don’t have an extensive CV”.

It is endearing to hear him speaking in such terms, especially as someone who has spent most of his career as a player and manager at unfashionable clubs, but he has to be careful not to let the magnitude of the job overwhelm him.

It would be easy enough to do; after all, this is one of the biggest jobs in world football.

His biggest challenge will be living up to the fans’ expectations. Valverde won the league in both his full seasons as manager, and this was not enough. Barcelona fans want the Champions League, but Setién has never managed a single game in Europe’s elite competition.

Another failure in this year’s Champions League will be hard for Barça fans to stomach, and Setién may well find the fans getting on his back irrespective of how long he’s been in the job.

If they lose ground to Madrid in the league and go out of the Champions League, then surely he’s done for.

But for now, there is an air of cautious optimism around the club. Despite a recent Marca poll indicating that most Barcelona fans wanted Xavi to take over, Setién is still a popular choice among Culés.

It is undoubtedly a huge and daunting challenge for Setién, but it’s a great opportunity for both him personally, and for a club that has let its self-imposed standards slip in recent times.