Home F365 Features Will this be the 21st century’s greatest La Liga season? 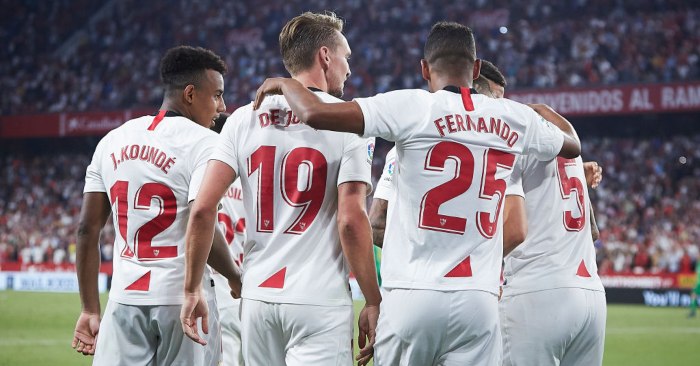 We’re now seven games into the La Liga season and it’s the tightest it’s been for years.

24 years, to be precise. This is the first time since the 1995/96 season, before the Madrid-Barcelona duopoly of the 21st century, that the top six have been separated by just two points at this stage of the season.

Does this suggest that the league is becoming more competitive? Perhaps. The belief held by some that La Liga is made up of Real Madrid, Barcelona, Atlético Madrid and 17 pub teams is clearly total cojones – anyone can beat anyone in this league, and upsets are a relatively regular occurrence – but it is fair to say that there exists a gulf between the ‘big three’ and the rest.

Or should that be ‘existed’? The top three are each showing signs of weakness this season. Real Madrid may be top but they have been far from convincing, and have been a scalp for lower-ranked sides on a semi-regular basis over the last couple of seasons. Atleti are in a period of transition, and haven’t found their rhythm yet, particularly in front of goal. Barcelona have pretty high standards, but this has been their worst start to a season in 25 years.

Just beyond the big three, there is a bank of strong and improving teams who are threatening to narrow the gap to the previously unassailable giants of Spanish football.

This doesn’t include Granada, although it would be remiss of me not to mention them at this stage, as they are second in the table. The Andalusian side, who returned to the top flight this year, could even go top this weekend if they win their top-of-the-table clash with Real Madrid, but sadly the likelihood is that they will fall away as the season wears on.

Among those posing a more genuine challenge are Real Sociedad, Athletic Club, Sevilla and Villarreal.

Real Sociedad ended last season well following a mid-term change of manager, and after some superb work in the transfer market, the Basque side look like the real deal. On-loan Real Madrid midfielder Martin Ødegaard is showing the kind of form that made him one of the hottest properties in world football a few years ago, while homegrown talent Mikel Oyarzabal is fast becoming one of La Liga’s biggest stars. Add new signings Portu, Alexander Isak and Nacho Monreal to an already talented squad, and La Real look like they could be destined for great things.

Their bitter rivals Athletic Club are not far behind. They may be somewhat lacking in firepower, only troubling the scorers seven times this season, but they are well organised and solid defensively. Bound by their Basque-only policy in the transfer market, they are reliant as ever on their academy, which continues to produce the goods. Unais Simón, Núñez and López are the latest three to break through, and they form the core of this side alongside more experienced players like Iker Muniain and Raúl García.

Sevilla are another side who have improved significantly since last season, with new manager Julen Lopetegui moulding the side in his image. Summer signing Joan Jordán has the potential to become world class, and Real Madrid loanee Sergio Reguilón has been a revelation at left-back. They are probably a quality striker away from a title challenge, but Lucas Ocampos and Nolito are chipping in with something of a goal threat from the flanks.

Villarreal, who spent much of last season in a relegation battle, are back in business. They may be a little leaky in defence, having conceded 11 times in their seven matches, but they have scored 18, more than anyone else in the league so far. With the indomitable Santi Cazorla pulling the strings from midfield, and striker Gerard Moreno topping the goalscorer charts, the Yellow Submarine look like they are back on course. If nothing else, they’ll certainly be a lot of fun.

As well as these four sides, there is still time for the likes of Valencia and Real Betis, of whom a lot was expected this season, to fight their way back into the mix.

It’s ultimately very unlikely that any of these pretenders will challenge for the title come the end of the season, let alone win it, given the financial inequality that exists within a league which heavily favours the Madrid sides and Barcelona. But they each have the potential to get closer to the top, to narrow the gap and to knock on the door of the elite.

There’s still a long way to go this season, but with the traditional top three weaker than normal and such an accomplished, well-equipped chasing pack, we could be in for one of the most competitive seasons in years.