Home Mediawatch Will this VENDETTA against Manchester City ever end? 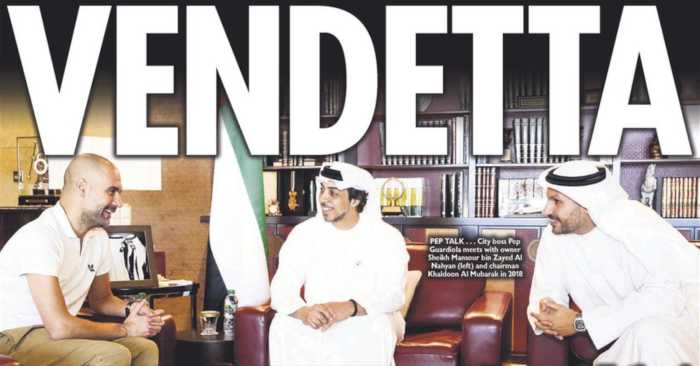 V for vendetta
‘Manchester City believe there is a campaign by Europe’s elite, including local rivals United, to bring them down,’ begins a piece by Martin Lipton that adorns the back page of The Sun.

‘City have come out fighting over reports they face an imminent Champions League ban.’

They most certainly have. Did everyone expect them to just hold their hands up and say ‘yeah, fair enough, you got us’?

‘And they reckon top clubs are fuelling the desire to have them hauled over the coals.’

Crikey. This sounds huge, like The Sun are about to uncover some sort of Europe-wide conspiracy against City. And just look at that back page…

VENDETTA: Man City believe there is a campaign to by Europe’s elite to bring them down | @MartinLipton pic.twitter.com/SNW8a8EebP

The implication is pretty clear: City believe there is a VENDETTA against them, led by jealous rival clubs hoping to quash their dominance.

The only problem? United are not referenced beyond a passing mention in the first paragraph, and no other supposed members of ‘Europe’s elite’ hoping to ‘bring City down’ are named either. Probably because they don’t run FIFA. Or UEFA. Or the FA. Or the Premier League.

Perhaps The Sun are simply extrapolating something from City’s official statement on the matter? They quote the most important part of it, after all:

‘Either Manchester City’s good faith is misplaced or the process is being misrepresented by individuals intent on damaging the Club’s reputation and its commercial interests. Or both.’

Except that’s only a heavily-edited part of the most important quote, robbing it of plenty of context. Here it is in full:

‘The New York Times report citing “people familiar with the case” is therefore extremely concerning. The implications are that either Manchester City’s good faith in the CFCB IC is misplaced or the CFCB IC process is being misrepresented by individuals intent on damaging the Club’s reputation and its commercial interests. Or both.’

That sounds an awful lot like City are pointing the finger at ‘individuals’ at either The New York Times or in the CFCB, guys. Not like they’re convinced Liverpool or Barcelona are out to get them.

Still, that won’t sell newspapers, will it?

Snog, Parry, Avoid
Not that The Sun are the only outlet guilty of unnecessarily stoking club rivalries on a particularly difficult day. Step forward, the Daily Mirror website.

‘Former Liverpool chief on board that decides on Man City Champions League ban’ reads the headline to an article that takes five paragraphs to even mention Rick Parry, and a further two to point out that ‘he declined to address suggestions there may be a conflict of interest regarding his involvement’. And he ‘declined to address those suggestions’ because they are complete and utter bunkum.

As is a newspaper website using its platform to continue to drive a wedge and spark controversy between two fanbases. This kind of thing really is quite damaging.

Hazard warning
The Sun’s website does not concern itself with such matters: Lipton’s article is given the smallest possible box on their homepage alongside such stories as ‘Utd flop Sanchez compared to Game of Thrones’ star for getting paid to do nothing’.

Given more prominence is an article listing the £1.6m worth of cars that Paul Pogba owns, Robin van Persie being branded a ‘snake’ for wearing a half-and-half Arsenal and Manchester United shirt, and a video of Heung-min Son being a beautiful human.

Oh, and a story with the headline of ‘Hazard stars in advert which ends with ‘next stage: Madrid’ in Real hint’. This is huge news.

‘CHELSEA supporters have been left convinced that Eden Hazard is on his way to Real Madrid after he appeared to confirm the move in an advert.’

Wow. Was he wearing a shirt with Sergio Ramos’s name on the back and having a phone conversation with someone called Zinedine, all while eating a meringue? How did he ‘appear to confirm’ this move?

‘He fuelled speculation that he’s off to Madrid after he revealed Chelsea already know his decision regarding his future following the 0-0 draw against Leicester.

‘And Blues fans believe that he has dropped his biggest hint yet after he appeared in an advert for Nissan Football, where the player went around London scouting prospects.

‘After competing in drills, two players qualify for the next event, as a message pops up reading: “Qualified. Next stage: Madrid.”‘

Coulda, woulda, shoulda
But that’s not the biggest story in football as of Wednesday lunchtime. No, that honour belongs to this offering from the Daily Mirror, who put this atop their website:

Dirty Sanchez
‘Manchester United will pay £13m to get rid of Alexis Sanchez as they look to free up room on wage bill’ – Sami Mokbel, Daily Mail exclusive, May 2.

‘Manchester United could be forced to pay Alexis Sanchez £12million next season NOT to play for them’ – John Cross and David McDonnell, Daily Mirror, May 15.

How many people does it take to figure out that £500,000 a week adds up to £1million over a fortnight? Two: a Chief Football Writer and a Manchester correspondent.

Slight difference of opinion
‘Napoli’s Kalidou Koulibaly has long been a desired target, but sources say the current asking price of over £90m is far too much’ – Independent, May 15.

‘Napoli want around £90m for their coveted centre-back and United are ready to pay that figure’ – Daily Mirror, May 15.

Welcome to the Black Parade
‘Arsenal started planning their Europa League victory parade at the beginning of March – before they had even reached the quarter-finals’ – Daily Mail.

It’s almost as if arranging for tens of thousands of people to be in the same place at the same time requires a lot of organisation and planning, what with safety precautions and just plain bloody common sense. Mediawatch expected Arsenal to just wait and see what happened before sending a WhatsApp message to all their supporters just before boarding the plane back from Baku.

Ant man
‘Antoine Griezmann has sparked a scramble for his signature by Europe’s top clubs after telling Atletico Madrid he wants to leave this summer’ – Daily Mirror.

He is 1/20 to join Barcelona, with Paris Saint-Germain the next best available odds at 9/1.

Roman empire
‘When David Luiz sat down across the table from Roman Abramovich to discuss the future, he did not find a distant owner, someone remote and losing interest in Chelsea’ – Matt Barlow, Daily Mail.

That’s not what you were saying almost a year ago, fella.

Recommended reading of the day
Rory Smith on Manchester City.