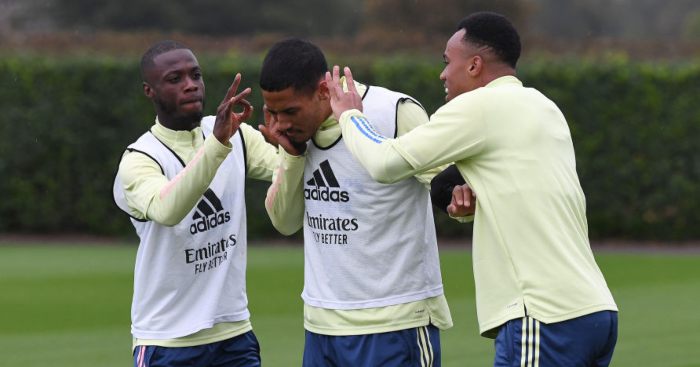 The 19-year-old saw a deadline-day loan move to former club Saint-Etienne fall through but the PA news agency understands he could yet spend the season in the second tier.

Saliba joined Arsenal from Saint-Etienne last summer for a reported £27million – but the agreement also meant he would remain with the French side for the 2019-20 campaign.

A number of injury problems, coupled with the cancellation of the Ligue 1 season following the coronavirus outbreak, meant Saliba’s final year with the club did not go as planned as he made just 17 appearances.

He returned to Arsenal before Saint-Etienne’s rescheduled Coupe de France final against Paris St Germain on July 24 with the two clubs unable to agree the best training regime for the player.

It was widely expected that Saliba would become a member of Mikel Arteta’s first-team squad at Arsenal heading into the current season but he has yet to make his competitive debut for the club, with summer signing Gabriel Magalhaes leapfrogging him in the pecking order.

Arteta has been asked about Saliba’s continued absence on a number of occasions and it is believed language issues and the death of his mother have contributed to the France Under-20 international’s slow adaptation to life in England.

“For many reasons, that wasn’t the transition year that he needed because he had a lot of injuries, some personal issues and also with Covid and the French league getting cancelled, he didn’t have that year,” Arteta said recently when asked about Saliba’s loan spell.

“He needs that year of transition and we are trying to make the right decisions for him to give him the best transitional year to have the player we want in our future.”

That year looked like once again taking place at Saint-Etienne, only for the French side to point the finger at Arsenal when a deal could not be struck in time for Monday’s deadline.

“Unfortunately, all the administrative conditions could not be met in time, in England, for the completion of the deal,” a club statement read.

“The disappointment is great for ASSE and William Saliba, who was particularly determined to return to a club where he has flourished.”

However, the PA news agency understands Saliba – whose only appearances for the Gunners to date have been in pre-season friendlies – may still leave the Emirates Stadium.

There is a domestic-only transfer window still running, which can see Premier League clubs trade with English Football League sides until October 16 and it is understood Arsenal are now strongly considering the option of loaning Saliba to a second-tier club.

Arsenal completed the signing midfielder Thomas Partey from Atletico Madrid on transfer deadline day, while Lucas Torreira moved the other way on loan and Matteo Guendouzi signed for Hertha Berlin on a season-long loan.