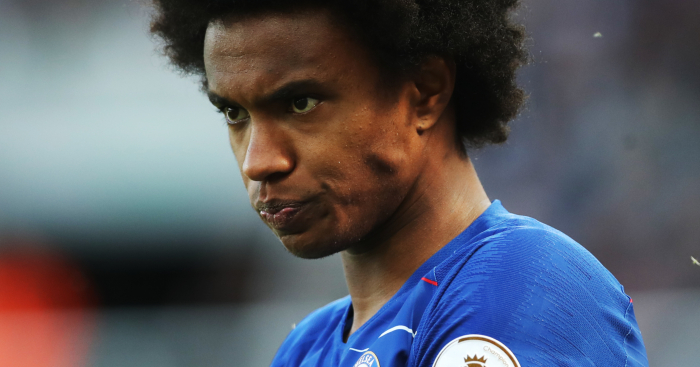 The younger of our two wingers in the Old Folks XI is in his seventh season in England, where he’s won two Premier League titles and lifted both domestic cups. Before that he played on a dominant side in a less prestigious league, so four titles and three cups were a reasonable equivalent there. He’s scaled European heights at both clubs, winning the very last UEFA Cup and the most recent Europa League. He has 70 international caps, playing in two World Cups and three Copas Américas. He’s one of the best Brazilians to grace the Premier League. He’s fast, he’s tricky, and he’s got a halo of hair you can’t miss. Like so many of the greats – Pelé, Xavi, Stormzy, Archimedes – he goes by one name. And that name is…

Willian isn’t primarily known for his goalscoring, but he’s tallied for Chelsea at a reasonably consistent rate, roughly once in every 5.7 matches. So it’s appropriate to ask this most excellent pub quiz question: who were the opponents when Willian scored his first goal at Stamford Bridge?

He was in the black and orange of Shakhtar Donetsk, playing in the Champions League group stage in 2012. As the video shows, he got his second Bridge goal that evening too. Moreover, he’d already had a brilliant match when Shakhtar had defeated Chelsea in Ukraine, helped out by teammates Fernandinho and Henrikh Mkhitaryan. They were a thrilling attacking side, and two years earlier they’d made it all the way to the Champions League quarter-finals.

We emphasize this because Willian’s been at Chelsea so long that one forgets how early he made his name. After coming through Corinthians academy in Brazil, he signed with Shakhtar at the age of 19, and became a regular the following year, 2008/09. In the climax to that season, he played all 120 minutes in the UEFA Cup final victory over Werder Bremen. In 2010/11, he was named the league’s Player of the Year.

By summer 2013 he was coming into his prime, and it was inevitable he’d be stepping up in class. In January he’d switched to Anzhi Makhachkala, as part of billionaire Suleyman Kerimov’s pie-in-the-sky attempt to build a power in Russia. (More great quiz questions: Willian’s manager at Anzhi was Guus Hiddink, one of his teammates was Samuel Eto’o, and one of his first matches was in the Europa League against Newcastle.)

But the big project went belly up a few months later, and so it was time to make the big jump. If you don’t remember that particular transfer saga – and one of the great sagas it was – Google can provide you with hours of hilarious reading. Although Manchester United were said to have made a late move, it was Liverpool who were positive they had their man. But Tottenham, ready to spend their Gareth Bale money, were set to gazump Liverpool.

And gazump they did. Spurs had already coveted Willian when he was at Shakhtar, with Daniel Levy even flying to Ukraine to close the deal. It didn’t get closed, so Willian went to Anzhi instead. This time, though, it was a sure thing: the player was in north London for a medical, everyone had done the requisite coughing, and all was well.

Then came the rare but always amusing double-reverse gazump. At absolutely the last moment Chelsea, having found out about the medical, stepped in with an offer. Willian was actually stuck at Spurs’ training centre for eight hours, and threatened with all sorts of horrible consequences, before his agent settled terms with the Blues and he could get across town.

As I said, there’s sheer gold on the web if you want to go deeper. For the moment we’ll settle for this priceless press conference bit from José Mourinho, the cat who swallowed an entire aviary.

Actually, I can’t resist one more, and neither can Chelsea. More than six years later, they’re still trolling their London rivals about it:

All eyes on London. The world is watching.

When Willian finally got himself into the Samsung shirt, we were told by all and sundry that he was a number 10, which was weird, because he’d played mostly on the wing for Shakhtar. Mourinho sensibly played him on the right, with Eden Hazard on the other side, and Oscar behind the striker.

Since this was Mourinho, though, Willian soon became known primarily for his workrate. For a while he was indisputably the best defensive winger in the league. At the other end, meh. In the title year 2014/15, despite 28 starts and 36 total appearances, he finished with only one goal and two assists.

In fact, it was only as José melted down the following year that Willian came into his own. He was universally regarded as the only one to come out of that season with any glory, and got the Player of the Year gong from both supporters and players.

In the years since, Willian’s been just a good Premier League winger. Very fast, lively in possession, capable of fine combination work, he’s been an essential part of the side. Even in the title year under Antonio Conte, where he was a substitute more often than a starter, he scored a career-high eight league goals, and added four in the FA Cup. Over the years for Chelsea he’s produced a nicely balanced 57 goals and 58 assists in all competitions, with an impressive 10 goals from direct free-kicks.

His best match for the Blues? Unquestionably the first leg of the Champions League knockout tie against Barcelona two seasons ago. As a long-time Willian watcher (and frequent Willian critic), I remember thinking that evening he’d convinced me for good. He was absolutely unplayable, easily outshining Eden Hazard, Lionel Messi, and everyone else on the pitch and in the stands. Chelsea have obligingly provided us with a video of his work, and it’s well worth your attention:

On the surface his international career has been an equal success: you can’t argue with 70 caps for Brazil. The scoring numbers aren’t bad either, with nine goals and 15 assists overall. But a closer look at the record shows he’s never quite matched his club achievements with the Seleçao.

For one thing, those 70 caps include only 44 starts. At the 2014 World Cup, for example, he made five appearances but only started in the third-place match. In 2018 he did start all five matches, and created the winning goal against Mexico, but was replaced at half-time both against Costa Rica and in the knockout loss to Belgium.

His Copa America appearance numbers aren’t bad either, but in those years Brazil were in a down period, so there was little to show for them. He started all four matches in 2015, but the side lost to Colombia and went out in the quarter-finals against Paraguay. In 2016, three more starts, but a draw with Ecuador and loss to Peru meant the team didn’t even get out of the group stage. When in 2019 Brazil finally won the tournament, he didn’t start once, and was on the bench for the whole final.

But while his Brazil opportunities have probably come and gone, his Chelsea efforts continue quite literally apace. If he’s lost any of his speed, I haven’t seen it. Plus, his eight combined goals and assists trail only Tammy Abraham and Mason Mount. But it’s crossroads time: his contract is up in the spring, he’ll turn 32 before next season begins, and both Callum Hudson-Odoi and Christian Pulisic are young and seriously talented.

Chelsea appear to want to keep him: all the reports said they refused to sell to Barcelona (!!) this past window. Negotiations figure to go down to the wire, with length of the new contract the likely sticking point. Either way, Willian’s had an admirable seven seasons, and the Catalan interest tells you we’ve still got a player here. A Camp Nou move would be quite the topper – and wouldn’t it become a great quiz question if he arrived just as Messi left?