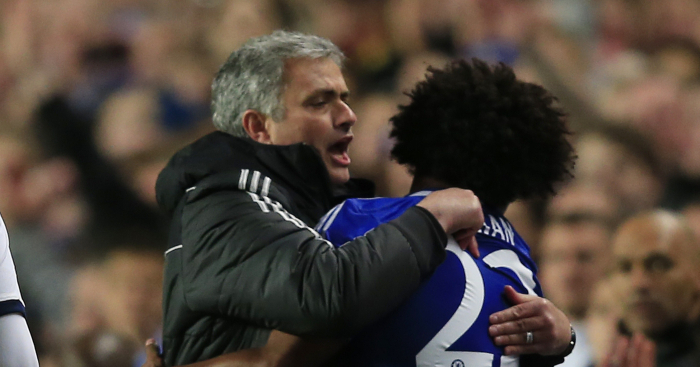 Chelsea forward Willian has hailed his former manager Jose Mourinho amid speculation linking the Brazilian with a move away from Stamford Bridge in the summer.

Willian has played at Stamford Bridge since 2013, but could have joined Spurs before that, even undergoing a medical with the club.

It has now been suggested that he could move across London in the summer, although Spurs will have to beat Barcelona to his signature if he doesn’t renew with Chelsea.

And the Brazilian has now dropped a strong hint that he would be in favour of the move by praising the impact Jose Mourinho had on his career.

“People ask me about the best coaches I have had. For sure, Mourinho is one of them,” he explained (as quoted by the Mirror).

“We had a special relationship. He demanded a lot, so there were some conflicts, but that’s normal.

“He would challenge me and call out my mistakes, but if I had played well he would also say something like, ‘today you killed it’.

“I loved his man-management, how he organised training, how he spoke in meetings. I learned a lot from him.”

In another revelation, Willian also admitted that he is still in contact with Mourinho – who could have signed him for another Premier League club.

“Even after he left Chelsea he spoke well of me,” he added. “We are still friends. Sometimes we exchange messages.

“When he was at Manchester United he wanted me to go there. And the way in which he made that clear was always respectful.”

With the arrival of Hakim Ziyech at Stamford Bridge in the summer, there appears to be less space for Willian, which may give him more reason to leave.

Indeed, Sky Sports pundit Jamie Carragher believes “something might happen” on the transfer front for the 31-year-old this summer, after years of speculation.