Home F365 Says Willian should not be non-negotiable at Arsenal 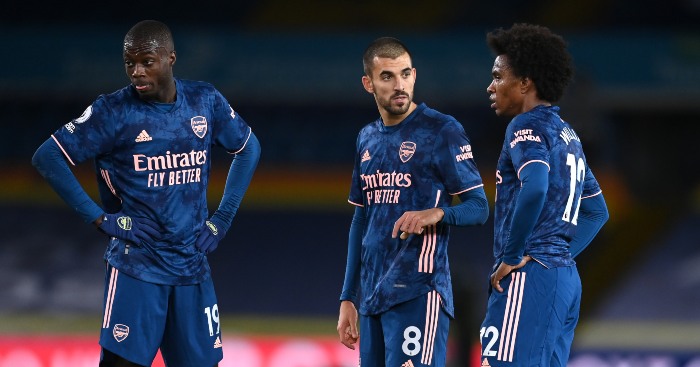 Mikel Arteta has used the phrase “non-negotiables” enough times – at length on his appointment and then when discussing the banished Mesut Ozil – that it is undeniably an attempt to insert this phrase into the lexicon of Arsenal, to inform fans, players and journalists that this new era is different from the old era, that there are standards to which everybody should adhere. After the perceived softness of latter day Arsene Wenger and the wooliness of Unai Emery come the hard lines and clarity of Arteta and his non-negotiables. It’s excellent PR.

What does it mean? “Discipline, self-discipline and making sure that our behaviour, positive behaviours are continually reinforced,” explained Arsenal assistant Steve Round. “Negative behaviours are pulled up, there are certain things we will not accept.”

Like, for instance, flying to Dubai during the international break in direct contravention of both coronavirus rules and club guidelines? You might think that could be filed under ‘ill-discipline’ and definitely under ‘negative behaviour’. And yet, when asked about Willian’s trip to Dubai – where he posed with Salt Bae, obviously – Arteta positively bristled at the suggestion that there should be any real consequence of such a public flouting of the rules. The Brazilian then duly started against Leeds on Sunday afternoon. It turns out that the one real non-negotiable at Arsenal is Willian.

“It’s impossible because we have so many rules, so many guidelines that we have to follow. Sometimes, without even thinking, you break them,” said Arteta in Willian’s defence, as if the Brazilian had accidentally shaken hands with a teammate, failed to wipe down his supermarket trolley or walked in the park with more than one person outside his bubble, rather than actually flying to Dubai. Footballers have rather different lifestyles and different perspectives, but it seems unlikely that anybody can take a seven-hour flight “without even thinking”.

Important to remember that Willian is probably very stressed about his urgent business matters in Dubai.

Making Willian the exception to stringent disciplinary rules might be accepted by Arsenal fans if Willian was exceptional. In football, mavericks are given leeway and bad boys are given mere slaps on the wrist if they produce magic on the pitch. But Willian has only been exceptionally bad this season, neither assisting nor scoring a goal since the opening day of the season and creating only one chance in his last three appearances. Those of us who defended his transfer are feeling particularly silly right now.

Paul Merson was right when he said that Willian has ‘looked lost’ this season at Arsenal, perhaps because – by his own admission – he has never played under a coach with Arteta’s ‘mindset’, where every movement on the pitch appears to be prescribed rather than improvised. He called it a ‘cool experience’ but perhaps it’s not an experience with any real longevity; after all, it’s harder to teach an old dog new tricks than prevent him going on a mid-season trip to the Middle East.

Goodwill for Arteta is dwindling with every week that brings another poor Arsenal performance but while some time and patience can be granted as he grapples with a system that suits these particular players, there is little excuse for his continued perseverance with a player guilty of both poor behaviour and poor form. Hypocrisy and favouritism – Willian was reportedly a transfer target driven by the manager – are not traits to be tolerated in a manager losing (or luckily drawing) football matches.

The fear among Arsenal fans now is that Nicolas Pepe’s red card (a split-second mistake which attracted far more ire than Willian’s premeditated jaunt to Dubai) will push Arteta back towards a prosaic front three of Pierre-Emerick Aubameyang, Alexandre Lacazette and the Brazilian, who was substituted on Sunday only because “he felt something muscular”, which sounds rather more fun than anything else that happened at Elland Road.

It might be too late to punish Willian for Dubai but it’s not too late to react to his bad form with something other than determination and belief that things will magically click for him at Arsenal. At this point, his demotion should be non-negotiable.