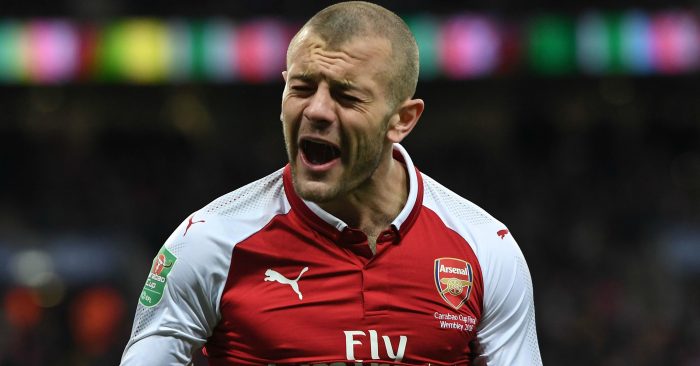 Jack Wilshere admits Arsenal have not been good enough in recent weeks and has revealed he is no closer to signing a new contract at the club.

The 26-year-old England international has a little more than three months remaining on his current deal but negotiations over an extension remain at an impasse.

He started against AC Milan on Thursday night as the Gunners ended a run of four straight defeats with a 2-0 Europa League victory in Italy.

The San Siro win puts Arsene Wenger’s side on course for the quarter-finals, with the Europa League not just the only chance of silverware this season but also increasingly the only viable route back to Champions League football.

Recent results have left Arsenal 13 points adrift of the Premier League top four, with a 3-0 defeat to Manchester City in the Carabao Cup final also denting the confidence of the players. They return to domestic action with a home game against Watford on Sunday.

Wilshere conceded after the win in Milan that the performances have not been up to scratch of late and called on the squad to use this victory as a platform for the rest of the campaign.

“If anyone tells you you haven’t got to prove anything to anyone, they are wrong,” he said.

“You are always trying to prove yourself to people and play well in the next game. We know we haven’t been good enough. We are aware of it.

“We have got another game on Sunday and then next week, the job in this competition is not done yet…this is AC Milan. They can come, want to play and want to win the game. We have to be ready.”

Wilshere started this season needing to prove his fitness and form in order to earn a contract to stay at the Emirates Stadium.

He has certainly done that and has returned to a first-team regular having been limited to Europa League group games earlier in the campaign.

Reports suggest Wilshere has been offered a lower basic salary than his current deal and that, given his poor injury record in recent years, a new contract would therefore be heavily incentivised around appearances.

Asked after the last-16 win in Milan whether he had anything to say about his contract wrangle, Wilshere replied: “Not really, no.”

Wenger has said in recent weeks that signing the deal is all down to Wilshere as the club have made their offer.

But the midfielder, who spent last season on loan at Bournemouth in an attempt to play more football, said no progress has been made.

“Things have changed since then,” replied Wilshere when asked about Wenger’s comments.

“All I can tell you is that we are no closer to sorting anything out.”