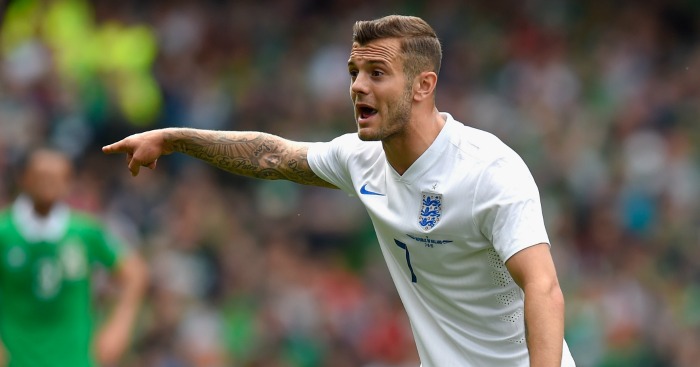 Arsenal midfielder Jack Wilshere is reportedly in line to be included in the England squad for Euro 2016 when Roy Hodgson names his 23 players this week.

Hodgson has until May 31 to submit a 23-man squad to UEFA with up to six more players allowed to be included on standby. However, he is ready to make his announcement at Wembley on Thursday, with the Sunday Telegraph claiming five strikers and just seven defenders will feature in the squad.

Hodgson could name just three centre-halves in John Stones, Gary Cahill and Chris Smalling, with Eric Dier – who has impressed this season as a holding midfielder – additional cover.

Wilshere has only recently recovered after having to undergo surgery on his left fibula back in September and, prior to Arsenal’s Premier League clash against Manchester City, has featured in only six minutes of first-team action this campaign.

Hodgson is said to be a keen admirer of the 24-year-old, though, and is hoping England’s upcoming friendlies with Turkey, Australia and Portugal will be enough to get the Gunners midfielder back up to speed and pushing for a starting spot.

The report also reveals that the FA’s medical team have been to Liverpool to check on the progress of fellow midfielder Jordan Henderson.

The Reds captain is currently sidelined with a knee ligament injury which is set to rule him out of the Europa League final against Sevilla on May 18, but England staff are hopeful he will ultimately win his fitness race and be able to feature over the summer in France.

Townsend’s superb free-kick earned Newcastle a 1-0 victory over Crystal Palace in the club’s last match at St James’ Park and the 24-year-old’s return to form has prompted talk of an England call-up for the former Tottenham star.

The winger won his last cap for England in October 2015 when he came on as a substitute in the Three Lions’ 3-0 victory in Lithuania in a Euro 2016 qualifier.

The news that England and Arsenal winger Alex Oxlade-Chamberlain will miss Euro 2016 with a knee injury means Townsend is in with a chance of a call-up to Roy Hodgson’s squad.

And Benitez feels Townsend is worthy of a place in the England squad for the tournament in France this summer.

The Spanish coach said: “I think he’s doing so well that he can be in the squad without any problem. He has quality, but it is not just that quality from free-kicks and the way that he plays, it is that he works so hard also helping the team in defence.

“When you are a manager, you are looking for players you can trust. He can make the difference in attack, but he also helps in defence. Physically he is fine now and has a lot of confidence in himself.”