Home Liverpool Wilson and Brewster net but Dortmund down Liverpool 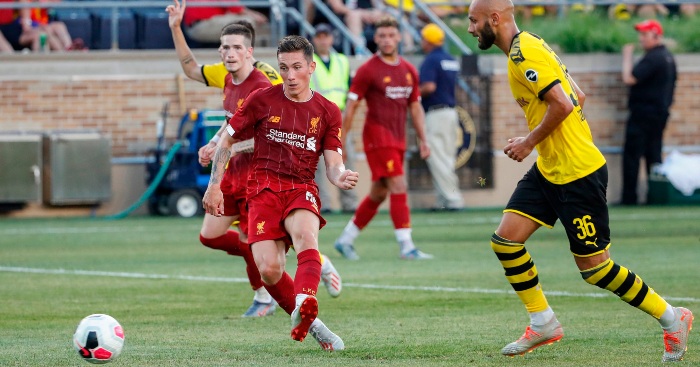 Liverpool’s pre-season preparations have been dealt a blow after being beaten 3-2 by Borussia Dortmund in their first match of a tour of the US.

In stifling conditions at the Notre Dame stadium in Indiana, the European champions faced the Bundesliga runners-up in what Jurgen Klopp had called “the first proper test” of his side’s pre-season.

Missing veterans Roberto Firmino, Alisson, Mohamed Salah and Sadio Mane due to the Copa America and African Cup of Nations, Liverpool were hurt by a sloppy defence and Dortmund wasted no time in finding the net courtesy of a close-range strike from Paco Alcacer after just three minutes.

Harry Wilson found the net in the 35th minute to draw level but Dortmund scored two quick goals after the break.

Delaney made it 2-1 eight minutes into the second half with an easy tap-in and Bruun Larsen extended the lead after finding the bottom corner in the 58th minute.

Rhian Brewster converted a penalty in the 75th minute after Ben Woodburn was brought down in the box but the Reds could not find the equaliser in the closing stages in front of the 40,361-strong crowd.

Klopp had featured many of the younger players in his starting line-up but handed Trent Alexander-Arnold, Jordan Henderson, Andy Robertson, Virgil van Dijk and Georginio Wijnaldum their first summer match action after making 10 changes on the hour mark.

Liverpool will continue their pre-season tour with at Boston’s Fenway Park against Sevilla on Sunday.