Home Home Page Front Page Winks is ready for England…but are Tottenham ready for him? 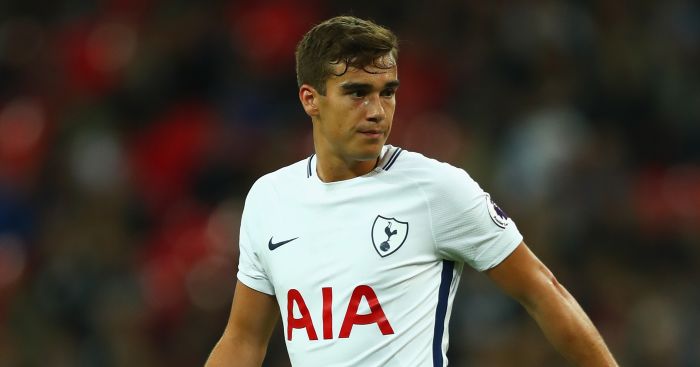 “Mauricio is a fantastic manager and he has a lot of belief in us,” said Harry Winks shortly after his England debut had ended on Sunday evening. “Not only does he give us the opportunity but he gives us advice when we need it. I can’t thank him enough for everything he’s done for me. I suppose it’s about me paying it back, and fortunately, it went well tonight.”

Tottenham teammate and fellow interviewee Harry Kane reiterated the message to their club manager. “These players earning their England debuts show hat Mauricio’s one of the best managers in the world, if not the best. He brings players through, gives them chances on the big stage and they deliver for him. We can’t thank him enough for that.”

This outpouring of love from England’s two Harrys is hardly misplaced. They are two of 11 current players given their England debuts while playing under Pochettino’s management; Dele Alli, Fraser Forster, Adam Lallana, Eric Dier, Jay Rodriguez, Ryan Mason, Danny Rose and Kieran Trippier and Luke Shaw are the other nine.

It is a superb record, and one that deserves to define Pochettino’s management. Success and bringing through young players have become mutual exclusives at some elite Premier League clubs and under some managers, but not at Tottenham and not under Pochettino.

Winks too is right to be proud of his own progress. He has played for England at every age level from Under-16s, and was comfortably England’s best player against Lithuania, albeit against some pretty flimsy competition. Watching him collect and pass the ball in a deeper position (he is actually more used to playing as a No. 8), was like seeing Jordan Henderson in double-speed mode. When Henderson receives the ball to feet for England, too often you can see the cogs turning as he plans his next move; Winks played more on instinct.

Perhaps The England Fear just hasn’t got to him yet, or perhaps there is a reason why Pochettino privately refers to Winks as his ‘Little Iniesta’. The Spanish FA reportedly investigated his heritage, but to no avail. It is Winks’ great-grandparents, not grandparents, who were born in Spain.

Of all of us watching on Sunday, Tottenham supporters were the least surprised by Winks’ debut, beaming with ‘that’s our boy’ pride. Winks was a Spurs fan as a child and first joined the club at the age of five. Like Kane, he is ‘one of their own’.

We are eternally – and appropriately – told not to get over-excited about young English bucks like Winks, but there has to be some room for fervour. If you can’t be enthused by a smart, tidy passing midfielder at a time when England have precious few options, then what’s the point of it all? The light of hope might kill you in the end, but it’s better than living in darkness.

Yet Winks must also know that his England debut only signifies the start of his fight for an international career, not the end. At best, he has reached the end of the beginning. He is the owner of an England cap, and that can never be taken away, but the flip side is that Winks has played 597 league minutes in his career by the age of 21. Raheem Sterling (22) reached that milestone in October 2012.

In that sense, Winks truly is a product of Pochettino’s Tottenham. Under any other manager he might have been loaned to the Championship and then a lower-ranking Premier League team to gain the first-team football that most agree is vital for the effective development of young players. Yet Pochettino uses the loan system as his last resort, preferring to keep those he believes have a good chance of breaking into the first team under his wing. Under his wing typically means waiting in the wings.

For all Kane’s praise for Pochettino “giving young players chances on the big stage”, the statement is not yet true for Winks. His list of opponents when starting for Tottenham: West Ham, Burnley, Burnley, Huddersfield, Aston Villa, Wycombe Wanderers, Fulham, Millwall, Gillingham, Liverpool (in the EFL Cup), Barnsley, Gent, CSKA Moscow, Monaco, APOEL Nicosia. It is Southgate and not Pochettino who has taken the greater leap of faith over the last three months.

Winks is no fool. He must realise that he will only be taken to the World Cup, or be picked for friendlies next March, if he has broken into the Tottenham first team on a regular basis. Southgate called Winks up on faith, but he will need more concrete proof to give him a seat on the plane. So far, 2017 has brought two league starts. It has also brought injury but that only cost him the final two months of last season.

If that makes the England national team feel like a feeder club, the accusation stands up to some scrutiny. Fabian Delph was called up on the basis of one league start (out of position) for Manchester City; Alex Oxlade-Chamberlain started against Slovenia before he started a league game for Liverpool; Winks started against Lithuania after one league start in 2017/18.

What’s clear is that competition for places in Tottenham’s central midfield is stronger than in England’s. Jordan Henderson, Eric Dier, Fabian Delph and Alex Oxlade-Chamberlain vs Mousa Dembele, Victor Wanyama, Dier and Moussa Sissoko. The two greatest dangers to Winks’ World Cup hopes might be returns to fitness and form from Adam Lallana and Jack Wilshere, but if he can hold his own at Tottenham it is difficult to see him falling out of favour with England. It’s easier to be seen when you’re standing in a shallow pool.

In October, Tottenham play games against Real Madrid, Liverpool and Manchester United, while November brings fixtures against Real Madrid (again), Arsenal and Borussia Dortmund. It is not enough for Winks to be a fringe figure for such occasions. If he truly is Pochettino’s ‘Little Iniesta’, he must be treated as such.