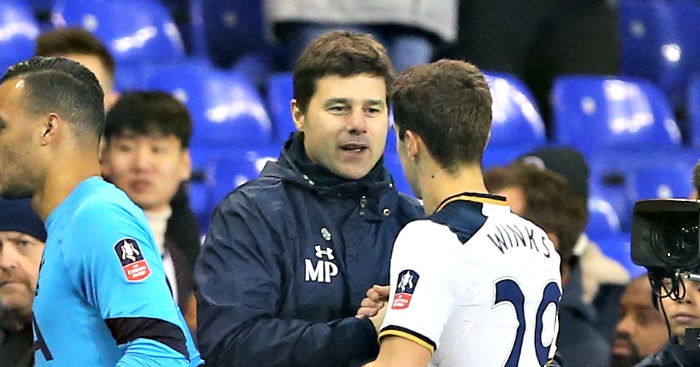 Harry Winks has recalled the moment one of his Tottenham teammates injured Mauricio Pochettino in training.

Winks has enjoyed a breakthrough season at Tottenham this campaign, playing 19 games and becoming a crucial member of the first-team squad.

He has scored his first Premier League goal – in the 3-2 win over West Ham in November – and has emerged as a valuable midfielder under Pochettino.

Speaking to The Independent, Winks told a story of how the manager once injured himself after stepping in for a player during training.

“One of the player was injured so the gaffer stepped in,” Winks said. “The ball went up in the air, and you knew something was going to happen, someone was going to get injured.

“The gaffer went for it, someone else went for it, either Cam Carter-Vickers or Ben Davies. He whacked his back, he’s hobbling to the physio.

“They were a bit nervous, ‘I’ve just injured the gaffer here.’”