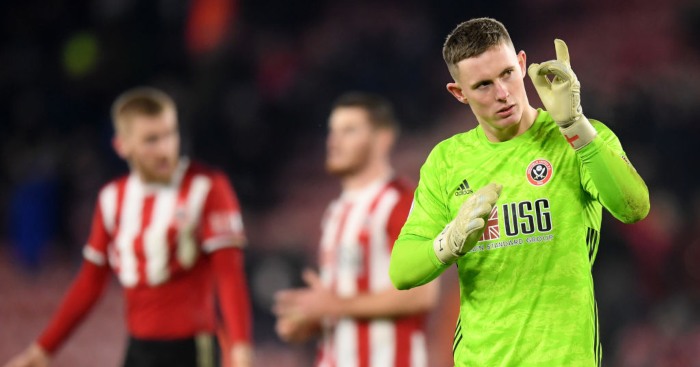 Dean Henderson has been in the international doghouse since England’s disastrous European U-21 Championship campaign last summer. He was one of the players that FA technical director Les Reed was alluding to when he spoke of unhelpful attitudes in Aidy Boothroyd’s squad and, among others, he was blamed for the group stage exit.

“When you want to win tournaments, you need to be confident. You need to have a bit of a swagger. A lot of the goals conceded were individual errors; a loss of concentration. But it [arrogance] contributed to errors in judgment on the pitch.”

Arrogant England is always the easy sell. It just sounds so believable. It’s a convenient charge, too, because it prevents deeper questions being asked, such as whether the U-21s were really as well coached as they might have been during that phase.

Henderson did make a terrible error against Romania. It was one he would actually repeat against Liverpool at Bramall Lane, but was that really a symptom of arrogance, or just a temporary lapse? Looking for a subtext whenever young players make mistakes doesn’t seem particularly helpful.

Still, the context of that adversity helps to frame Henderson’s season which, by any measure, has been magnificent. Sheffield United may have lost to Manchester City on Tuesday night, but live on television and staring down Pep Guardiola’s Murderer’s Row, he produced another compelling performance.

He made two excellent saves in the first half-hour, then followed them with a dramatic denial of Gabriel Jesus from the penalty spot; this was another night which made England’s case against him – if one still exists – look increasingly weak. He’s better than Tom Heaton, he’s better than Nick Pope, he may even already be better than Jordan Pickford.

Judging goalkeepers purely by their reflexes is a false economy. True as that may be, it shouldn’t prohibit admiration for the saves that Henderson has made this season. Nor should it prevent recognition for what has allowed him to reach some of those shots. He has the reflexes and agility, that’s clear, but his positioning also seems to be particularly good and his speed across his line – once you notice it the first time – is mesmerising. Fascinating, even.

Goalkeeping, according to those who know best, seems to be built out of lots of little steps. On tiny adjustments made according to where the ball is and in response to what the opposition is doing with it. Dean Henderson’s first half against Manchester City was a case in point.

The penalty save was what it was. A good guess and a fine reaction, but the two saves prior were far more impressive. During the moves which led to those chances, Henderson can be seen almost dancing on his line, constantly readjusting, and in both instances he then finds himself in the perfect position to make a save.

He’s had a lot of those moments this season. Most recently, against West Ham, when he scurried across his line to drag a Manuel Lanzini free-kick out of the bottom corner. Or the week before at Anfield, when he tipped a Mohamed Salah snapshot over the bar. Eyes are always drawn to the save – of course they, quite naturally – but the work in the seconds prior seems so much more important.

Perhaps goalkeepers don’t get enough credit for that? With Henderson specifically, it’s hard to remember too many conversations about him in punditry studios at all this season, let alone any relating to his starting position. Which is a shame, because that’s where so much of his good work takes place. With that Salah chance, for instance, by watching him in the split seconds prior, you can see him anticipating what’s about to happen and then, critically, shifting his position in a way that allows him to spring towards the ball.

Being a ‘keeper is such a binary situation. He has either ‘done brilliantly’ or else ‘he’s going to be disappointed with that’. But there’s so much fine detail to the position, probably more so than any other, and Henderson’s form this season has been built out of those tiny bits and pieces.

The strength in his wrists, for instance. I was at Molineux earlier in the season to see him make a brilliant save from Raul Jimenez. Matt Doherty looped in a cross and Jimenez redirected a header towards the top corner. It was well-positioned, but not heading for goal with any real pace and yet Henderson got a big, clubbing, right hand to it, and pawed it almost dismissively out of play. He put the power on it, not Jimenez. It wasn’t spectacular, but it was something to remember, as part of those cumulative, rough appraisals we all do.

Over the course of a season, for instance, he’s shown a habit of not just making saves, but making them in a way which deflects the ball over or away. He did that against City, there were no rebounds for any lurking forwards, but it’s really proven a staple of his game. Think of the Granit Xhaka volley he punched away in October, or the Che Adams downward header he pushed up and out in August. The save he made from Tammy Abraham at Stamford Bridge might actually be the best example. That was a terrific stop. But the way he slapped the ball out of the six-yard box made it excellent goalkeeping.

Come the end of the season, Manchester United will have a difficult decision to make. David De Gea remains the first choice, seemingly untouchable in spite of his downturn over the last year, but Henderson has a stronger argument than assumed. He won’t replace him, De Gea has far too much credit in the bank, but there isn’t that much distance between the two. In fact, stylistically there are plenty of similarities.

Over the years, De Gea has often shown his excellence in an unorthodox way. The positions he adopts are slightly strange, particularly when he’s making saves with his feet, and yet – at his best – he always seems to make the right decision. Call him geometrically imaginative. As curious as the way he uses his body can be, it’s generally appropriate – the shape he contorts himself into is invariably the one which gives him the best chance of making a save.

The famous stop he made from Joel Matip at Anfield, for instance, made him look like an outfield player in goal. It had that unrefined quality. The more replays were shown, though, the more obvious it became that that was the only way he could have prevented Liverpool from taking the lead. He’s a very original goalkeeper in that way, there’s a lot of craft about him.

Of course, that doesn’t hold true at the moment, his form is really not what it was, but Henderson is actually very similar. Maybe it’s not quite as pronounced in him yet, but it still shows in how he defends one-on-one chances – with that upright stance – and the way he uses his body to cover angles and space. Again: slightly weird, but still really effective. Before that mistake he made against Liverpool at Bramall Lane, he denied Salah one-on-one, using a technique De Gea has almost turned into his own trademark. The similarities are impossible to ignore.

Come the end of the season, United are either going to have to play or lose him. He’s too good just to be kept on loan in perpetuity and, if he’s not convinced of his future at Old Trafford, then he’s entitled to permanence somewhere else.

England is a different matter. On form, Henderson is the best goalkeeper the country has. Traditionally, though, first choices are given the chance to de-select themselves; they only get dropped once errors make their positions absolutely untenable and, even then, club form rarely seems to matter. Only mistakes for England count, as they did for Paul Robinson, David James and Joe Hart.

So Jordan Pickford is probably safe for now. As calamitous as he can be for Everton, he’s rarely let Gareth Southgate down. But there is a conversation about his position now and, most likely, were it not for residual distrust stemming from the summer, it would probably already be a significant debate.