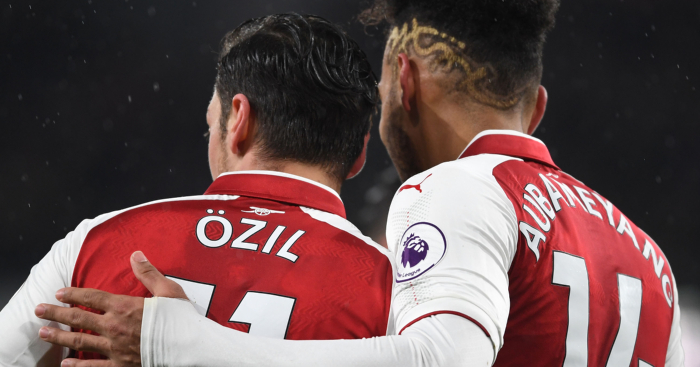 Arsenal legend Nigel Winterburn claims his former club face a big decision over the future of Pierre-Emerick Aubameyang this summer, with the striker entering the final 12 months of his contract.

No agreement has been reached over a new deal and questions continue to be asked of the prolific striker’s future in north London.

Some have suggested Arsenal should allow the 30-year-old to run down his deal, rather than risk parting with their most productive attacking force.

And Winterburn concedes it is a tough decision to make.

He told Genting Bet: “I hope Aubameyang will be an Arsenal player next season but they have a decision to make.

“Arsenal have never been a big spending club. His contract’s up next season and they’re not going to let someone run down their contract again, although they’ve got little opportunity if he wants to do that.

“If the indication is that he’s not going to sign, they may have to take the opportunity and say ‘right, we’re going to take £40 million or whatever’. I don’t think they’re going to get 70 or 80 that they’re talking about with a year left for a player that’s coming to 31 years of age.

“For me, it’s more important whether the player wants to stay, who comes calling in the summer, and do Arsenal take the risk or can they convince him to sign a new contract?  At the moment, it’s so difficult to call.”

Another of those to have seen a move mooted on a regular basis is Mesut Ozil, with the World Cup winner also tied to terms through to 2021, an agreement he intends to honour.

And Winterburn does not expect Arsenal to cash in on the playmaker, who has redicovered some form under Mikel Arteta.

He added: “I don’t think there is a case where Mesut Ozil will leave in the summer. I think Mesut Ozil has said ‘I’m staying, I’m seeing out my contract’. And Arsenal offered him the deal. He’s not going to be forced out the door if the club don’t want him.

“Ozil’s performances have improved. There’s no doubt about that. But, again, if you want to see a 90 minutes performance from Ozil, you’re going to be disappointed. He’s not that type of player. He’s in the game for 10 minutes, he might then disappear for a bit, but then he comes back into the game.

“But if you give him enough of the ball and he will create something for you. But is that enough for the current manager, and can he do a bit more defensively?

“You’re never going to get Ozil tackling, but can he get into positions to slow the opposition down or go and press properly when the manager wants you to press?

“I think that’s the questions that will be asked from Arteta to Ozil, to suggest whether he plays more regularly and what involvement he will have next season, which for me is more intriguing.”