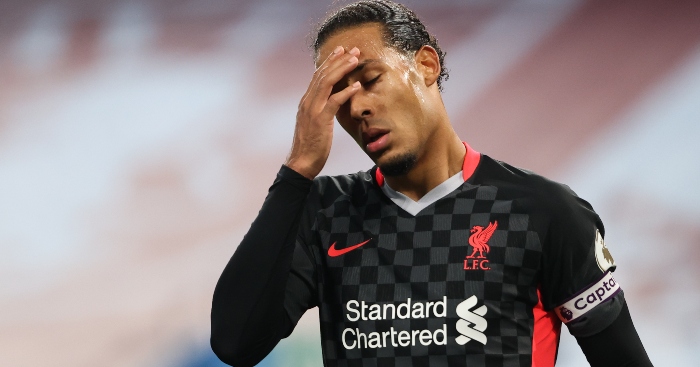 In normal times a freak result like Liverpool’s 7-2 defeat to Aston Villa can be disregarded as an anomaly, a score-line so incongruous and inexplicable as to have no meaning whatsoever. Like the Spinal Tap drummer who perished in a bizarre gardening accident, this sort of game is usually best left unsolved.

But these are not ordinary times. The result of some strange alchemy hangs in the air. The Premier League is an eerie, baffling circus of football at the moment, empty stadiums and the absence of a pre-season creating something so wildly and endlessly entertaining that our laughter is starting to turn into genuine concern, like a practical joke that’s gone on for an uncomfortably long time.

Our collective perception of what football is and can be has subconsciously shifted over the last four weeks, and once-invisible boundaries preventing games from reaching 5-2s, 4-3s, 6-1s and 7-2s have been shattered by the ‘new normal’; by training-ground matches played in a void – without pressure, and without authenticity anchoring them to the real world.

When Villa went 3-1 up after 35 minutes on Sunday, you could feel there would be four or five more goals. That shouldn’t happen, so why did it? Perhaps because Tottenham had just beaten Manchester United 6-1, and following so many other extreme results this season there was a wild, feral, snarling sense of possibility reverberating around Villa Park.

Perhaps we underestimate the power of expectation – the barriers we place on our surroundings and ourselves by underestimation, by assuming there are unwritten codes of practice. In 1954 Roger Bannister broke the four-minute mile barrier, a feat previously thought humanly impossible. A year later, three athletes broke it in a single race. Bannister had altered the limits of conventional thinking, causing a psychological shift that set new parameters of what could be achieved. Maybe something similar is happening in the Premier League: 5-2s and 4-3s are being de-weirded, suddenly made attainable on some inscrutable molecular level.

This psychological factor is widely accepted when it comes to games feeling ‘over’: players’ heads notably drop at 3-0 down, as we collectively appreciate that the match is finished. Are there deep unconscious elements at play, and because we expect things to feel normal, we make them so? Is there a secret magnetic pull towards the mean, towards the centre of the bell curve, which holds football together and denies the futility of chaos?

Why do games so often feel ‘done’ at 3-1, even when there’s 20 minutes left? Why do routs so rarely go over five? Why is it so often possible to feel a 1-0 coming? For a sport in which goalscoring has such a large degree of randomness, things are surprisingly constant once a score-line pattern emerges.

Part of this can be explained by a natural inclination to conserve energy once results are secured. But part of it might just be that an even game being played out as a 1-1 draw just feels right – not consciously, of course, but by forces deep inside the players. After all, it is a little odd that football scores have remained relatively constant – sort of, well, normal-sounding – for at least 40 years, during which time the sport itself has evolved technically and tactically beyond recognition.

Not so this season, in which we haven’t just had big scores but particularly unusual spreads. Three 5-2s, a 6-1, a 7-2; it’s not just that they’re high-scoring, it’s that the configuration itself is a bit bonkers, as if previous to 2020/21 there was an invisible seal that made everyone subtly conform to an expected value.

Alternatively, perhaps what we are witnessing is the meaninglessness of football without supporters, the loss of tension that comes from inside the stadiums. Psychologically, it may be difficult to differentiate the games from friendly matches or training sessions given there is no tangible external force being applied. Defenders are struggling to maintain hyper-vigilance; midfielders lack the micro-aggressions required to constantly apply the press; forwards are enjoying the freedom from pressure.

Whatever the reason, it is becoming genuinely alarming. The sport itself appears to be disintegrating at the margins, the silent bonds that kept things held together by order and reason slipping away in these ghostly, supernaturally quiet stadiums. The players are no longer grounded by anything, and as the variables that lodged football in place are stripped away – as the wizard’s curtain is pulled back to reveal nothing at all – so too has the subconscious acceptance of a ‘normal’ amount of goals dissolved into dust.

Maybe things will normalise again once players get their fitness back and once the league table settles into a pattern, forcing relegation-threatened teams to tighten up and title challengers to pay attention to every second of the game.

But the fitness and fan-less arguments don’t explain why the goalscoring phenomenon hasn’t affected the rest of Europe. The Premier League is uniquely surreal. That points to something more enigmatic, to witchcraft seeping through England’s top flight, causing chaos and panic; starting fires that are burning its structures to the ground.

A little melodramatic? Maybe. But trying to explain a result like Aston Villa 7-2 Liverpool calls for sorcery, voodoo and black magic. Something has been dislodged in the order of things. Perhaps it is best left unsolved.