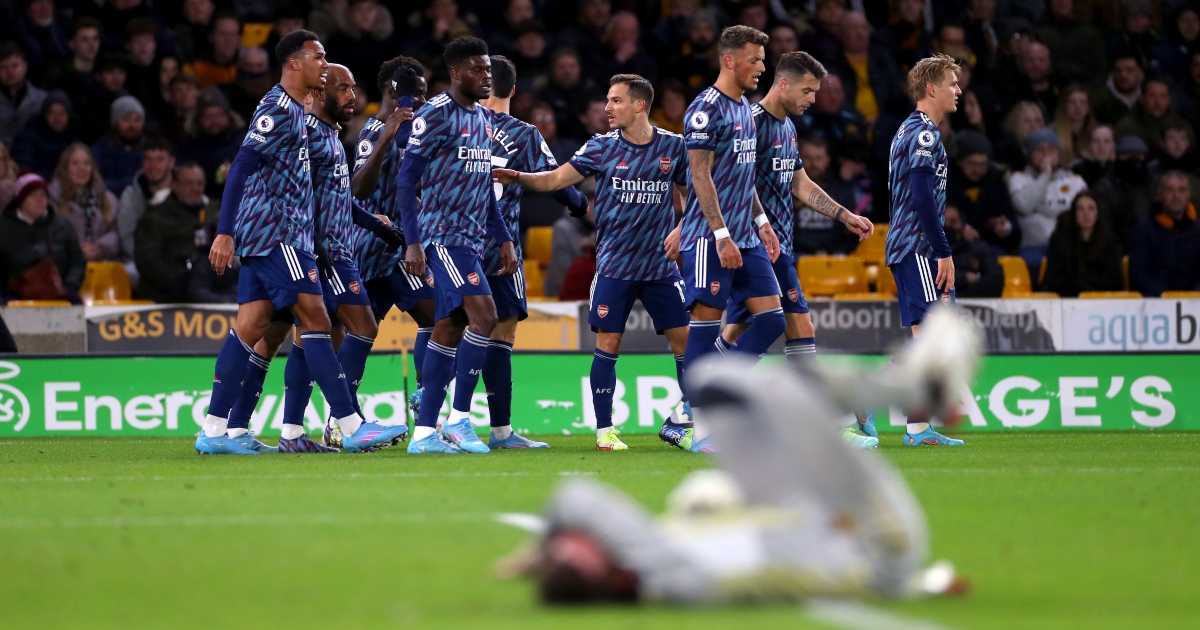 The defender’s first-half winner settled an ill-tempered game with the visitors earning a precious victory.

Gabriel Martinelli was sent off for two yellow cards within seconds of each other – the Gunners’ fourth dismissal in their last six games – after two quickfire fouls in the second half.

Arsenal show flair and grit and stupidity to see off Wolves

Wolves could not take advantage, though, and lost ground on the visitors, who climb to fifth in the Premier League, in the race for Europe.

Arsenal moved above Manchester United with their first win since Boxing Day and are now a point behind West Ham with two games in hand.

January’s trip to Dubai allowed them to hit the reset button after a chastening few weeks which had seen them exit the FA Cup and Carabao Cup.

Victory will give Mikel Arteta fresh belief his side can return to the Champions League for the first time since 2016-17.

In contrast, it was a damaging blow at the start of a run for eighth-placed Wolves which is likely to decide their season.

They face a rearranged trip to the Emirates later this month while also playing fellow European hopefuls Tottenham, Leicester and West Ham.

Bruno Lage’s understated nature has, in part, allowed Wolves to sneak under the radar – their miserly defence giving them the foundation for a surprise European charge with goals still hard to come by.

This is what it means ❤️ pic.twitter.com/JkR3WI8pRW

Not that Arsenal have been finding the net regularly enough having previously scored just once in five games this year.

There was little to suggest the Gunners would end their barren run, stretching back to New Year’s Day, early at Molineux.

A tepid, scrappy, game barely mustered any momentum in the opening 20 minutes. Max Kilman blocking Ben White’s drive was as good as it got until Arsenal grabbed what would prove to be the winner out of the blue five minutes later.

Wolves failed to clear Martinelli’s corner and White headed it back across goal for Jose Sa and Alexandre Lacazette to challenge and collide.

The ball then ran for defender Gabriel to poke in his third goal of the campaign from five yards – already a season’s best.

Wolves wanted a free-kick, but it was more in hope than expectation as it was Sa who had initiated the contact with Lacazette.

It was a goal at least in keeping with the game’s scruffy nature but, feeling sore, the hosts rallied and Raul Jimenez nodded tamely at Aaron Ramsdale.

Marcal curled wide with four minutes of the half remaining, but the Gunners returned fire with the best move of the match.

Bukayo Saka scampered down the right and swapped passes with Martin Odegaard before crossing for Lacazette to shoot straight at Sa.

After the restart, Leander Dendoncker miscued a header over before January buy Chiquinho made his league debut as Wolves tried to find the spark which, ultimately, eluded them.

The Gunners were also prepared to use the dark arts as they eyed victory, with goalscorer Gabriel booked for timewasting with half an hour left and, a few minutes later, the defender sat down apparently injured rather than walk a yard off the pitch.

But their petulance cost the visitors with 21 minutes left when Martinelli needlessly got himself sent off.

The striker tried to stop a quick throw by pushing Daniel Podence and, when referee Michael Oliver played advantage, Martinelli barged down the motoring Chiquinho.

The official immediately showed him two yellow cards for the offences.

From the free-kick, Arsenal survived thanks to the offside flag when Granit Xhaka turned the ball in but the challenging Jimenez was offside.

Despite their disadvantage, the Gunners still created a golden chance to seal the game when Lacazette was sent clear down the left but curled wide with just Sa to beat.

It gave Wolves hope and Ramsdale turned Romain Saiss’ fierce drive over as the hosts peppered the visitors’ goal without success.