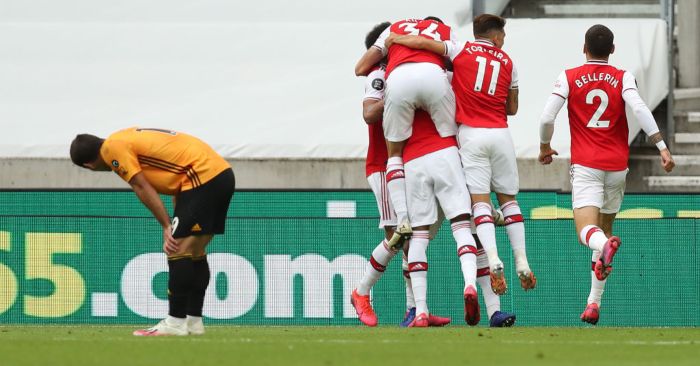 1) Christ, did Arsenal need a period like this. Since Mikel Arteta was appointed it has felt as though every positive step has been accompanied with a ‘yeah, but…’, and a desire to maintain perspective. The emphasis has constantly been on what they still have to do rather than what they have already done.

This is a club and fanbase that has been burned more than enough times to know not to get carried away. But these past few days are the sort that can truly transform the energy and spirit around a team. It is an invigorating, addictive sensation to finally take multiple steps forward without fear of consequently stumbling over your own feet or striding back.

Three straight Premier League wins, each with clean sheets. Progression in the FA Cup. The extended contracts of two exciting youngsters. Developments in negotiations with their one genuinely elite-level player. And this…

A statistic that surely cannot be right but has been checked:

This would be Arsenal's first away league win against a team they started the day below in the table since September 2015.

At least for the moment, optimism need not be cautious.

2) The setbacks will come. They are inevitable, unavoidable and often useful as teaching moments. It is a fortnight, for example, since they lost at Brighton, slipped to tenth and showed their absolute worst side: a weak team that could be wound up by those ostensibly less talented to the point of losing despite leading.

That result could be their most important of the season. It allowed for some vital introspection and soul-searching, forced a Matteo Guendouzi-shaped change in personnel and seems to have stoked a fire in these players to finally prove their doubters wrong. Arteta sent a message and his squad echoed it.

3) Wolves will be disappointed – obviously with the result, but also much of the performance. It felt pretty disjointed in places and lacked that usual fluidity. While Diogo Jota injected more of an attacking purpose in the second half, the hosts were flat and uninspiring.

There is no positive sell to forcing a single shot on target against a team hardly known for its hard centre and mental resolve. And that solitary effort came after 30 seconds. That is not even close to good enough.

4) There was a degree of that against Aston Villa, an opponent undoubtedly more accommodating when experiencing an off-day. The key difference between winning that game 1-0 and losing this by the same scoreline was the use of Adama Traore.

The winger came on as a substitute at Villa Park and had an immediate impact against a tired defence. He started as a striker on Saturday and posed less of a threat, still wasting a couple of good chances. If Nuno ever genuinely thought that Traore could excel in a 3-5-2, this was compelling evidence to the contrary. The future is 3-4-3.

5) Yet the game could have followed a completely different path had he scored that first chance. Sky had not even flashed their scoreline graphic and clock on the screen by the time Shkodran Mustafi failed to read a high ball and Raul Jimenez played Traore in behind. Typical Arsenal.

Credit to Emiliano Martinez for his reactions, restricting the space Traore had to operate in, the options he had to choose from and the time he had to decide. The keeper forced a poor effort from a similar situation just after an hour when the momentum of the game could have swung again. He has been a seamless replacement for Bernd Leno, which is no mean feat.

Good to see Traore vs. Arsenal begin in the terrifying fashion we have come to expect.

6) The first sign that Arsenal might miss Nicolas Pepe’s variation came soon after the 11th minute. Pierre-Emerick Aubameyang played Kieran Tierney in down the left with a pass so wonderfully weighted that the wing-back could afford for his first touch to be a cut-back to the edge of the area. That, too, was executed superbly, yet three Arsenal players continued their runs towards the goal instead of peeling away.

It is that sort of run that Pepe is so proficient at, requiring an anticipation that Arsenal lacked in that crucial moment. A midfielder with excellent attacking timing and positioning – Aaron Ramsey, anyone? – would have relished that delivery and space. It was a great move that deserved a finishing touch.

facepalmed as soon as I saw all 3 runners go to goalmouth. ANYONE holding back and that's a great look.

7) Eddie Nketiah was particularly culpable as the deepest of those three players, seeing two teammates ahead of him awaiting a ball across goal and electing to join them. He would show a much more encouraging intuition just after the half-hour mark.

As Arsenal struggled to break Wolves down, a Granit Xhaka pass was deflected into Nketiah’s path. He was quick to react and just as rapid in releasing a shot that Rui Patricio did brilliantly to tip onto the post despite having little time to set himself.

That dearth of awareness and game intelligence for the earlier non-chance can be coached over time. The killer instinct on display for the later shot is innate and invaluable. There is plenty there to work with and have patience in.

8) That was Arsenal’s first attempt of note. A pattern had long been established by that point of one team dominating possession in the midfield and their own half before an errant pass allowed the other side to do the same. When Nketiah dared to veer from the script and try something different, 65% of the game had been played in the middle third of the pitch.

The explanation with regards to Wolves is that nothing stuck to the front two; Jimenez and Traore are a fine partnership but not with that dynamic. As for Arsenal, it was a byproduct of a midfield that guarantees stability but lacks a player that can link effectively to the attack. Arteta will be understandably reluctant to sacrifice either Xhaka or Dani Ceballos and risk upsetting that balance.

9) Aubameyang dropping deep meant he didn’t need to. The breakthrough came when he received a ball inside from Cedric about 30 yards out, taking one touch to control the pass and another to play it out to Tierney on the other side. The deflection on the first-time cross was fortuitous; the finish from Bukayo Saka was phenomenal.

Having offered Cedric an option down the line, the teenager continued his run and got goal-side of Romain Saiss just as Aubameyang switched the play. He was the first to react to Doherty’s block, shifting his position and looping a picturesque shot past Patricio. Every aspect of those ten seconds or so from Saka could be shown in coaching sessions for decoy runs, utilising space, anticipating danger and responding to developing attacking situations. The boy is special.

And he has performed in each and every position. Hasn't looked out of place. What a talent we have. pic.twitter.com/baOlvE31nu

10) Yet that second goal might have been more satisfying from an Arsenal point of view, regardless of the context of it securing the victory and showing that Alexandre Lacazette can score away from home. His touch to eliminate Conor Coady from the equation after Joe Willock’s positive run and cross was exquisite, and that finish was excellent.

But trace it back to its origins: a header from David Luiz on the halfway line, followed by another from Mustafi, both contested evenly and won convincingly. How incredibly un-Arsenal.

11) The decision to switch to a back three – again, precipitated by the Brighton defeat – has been completely justified. It is a fine example of the sum parts, be they Mustafi, Tierney and Rob Holding against Southampton or Mustafi, Luiz and Kolasinac in the last three games, being far greater as a whole. Arteta was clever enough to spot what such maligned players have been diligent enough to implement.

Kolasinac, by the way, has been quietly brilliant. Five tackles, five interceptions and two clearances, all out of position. Swoon.

12) Nuno lost that game for Wolves as much as Arteta won it for Arsenal. The aforementioned impact of substitute Jota underlined the mistakes made in the starting line-up, uncharacteristic of one of the best tactical managers in the division. To have 65.3% possession and four off-target shots at home is desperate.

There were individual mistakes, not only from the defence but even in Joao Moutinho over-hitting a few routine passes. But this was a failure of the system that must be rectified soon. Wolves haven’t really played well since the restart; Arsenal were just the first team competent enough to punish them.

13) And the drinks break again has to be taken into account. All four of Wolves’ second-half shots came before play was paused in the 70th minute, at which point Arsenal’s most recent effort was Saka’s goal. In the final 20 minutes, the hosts had no shots and the visitors had five. It is almost impossible to countenance for that kind of momentum swing.

14) In terms of substitutions, Arteta’s victory over Nuno was even more comprehensive. Jota made a difference for a time but neither Pedro Neto nor Morgan Gibbs-White had a shot, created a chance or completed a dribble. They made a combined eight passes in 21 minutes plus stoppage time.

Arsenal’s changes were markedly better. Ainsley Maitland-Niles was excellent in nullifying an increasingly desperate attack, Hector Bellerin carried on from where Cedric left off and Lucas Torreira made a rare and settling appearance. Willock and Lacazette combined for the decisive goal to really emphasise the pivotal contrast in squad depth.

People had a go at Arteta for bringing on Maitland-Niles, Willock and Lacazette, but they all had a big part to play in the win.

AMN was really good in the physical duels & brought energy as Tierney was tiring, then the other two combined for the goal that got us over the line.

15) Maitland-Niles was impeccable. He made more tackles (4) in his 35 minutes than any Wolves player completed all game. For all the talk of the danger Traore poses, he was made to look fairly ordinary.

His is an incredibly interesting case. Arteta made a point of affording him a solitary minute in the FA Cup against Portsmouth in March, despite making nine changes. After the game, he noted that: “Ainsley needs to put his head down and work hard. Show me every day in training that he wants it more than anyone else, he wants to play for this club and fight for his place.”

It is vital for managers to show that there are not only negative consequences to their actions, but positives ones, too. If there is a way back for anyone, there is a way forward for everyone. Even you, Matteo/Mesut.

16) Wolves need not panic, much as Arsenal cannot plan the parades. The novelty of this season is that issues can be rectified almost instantly – although the flip side is that form can become self-fulfilling.

One observation is that a midfield alternative is likely needed. Moutinho and Ruben Neves are brilliant but similar enough that if one struggles, the other is likely to encounter the same issues. Dendoncker brings energy but not much variation and Gibbs-White has to be given more than a couple of minutes to make his inclusion worth it. Wolves obviously prioritise the wider areas but some central reinforcement might help them evolve further than they already have.