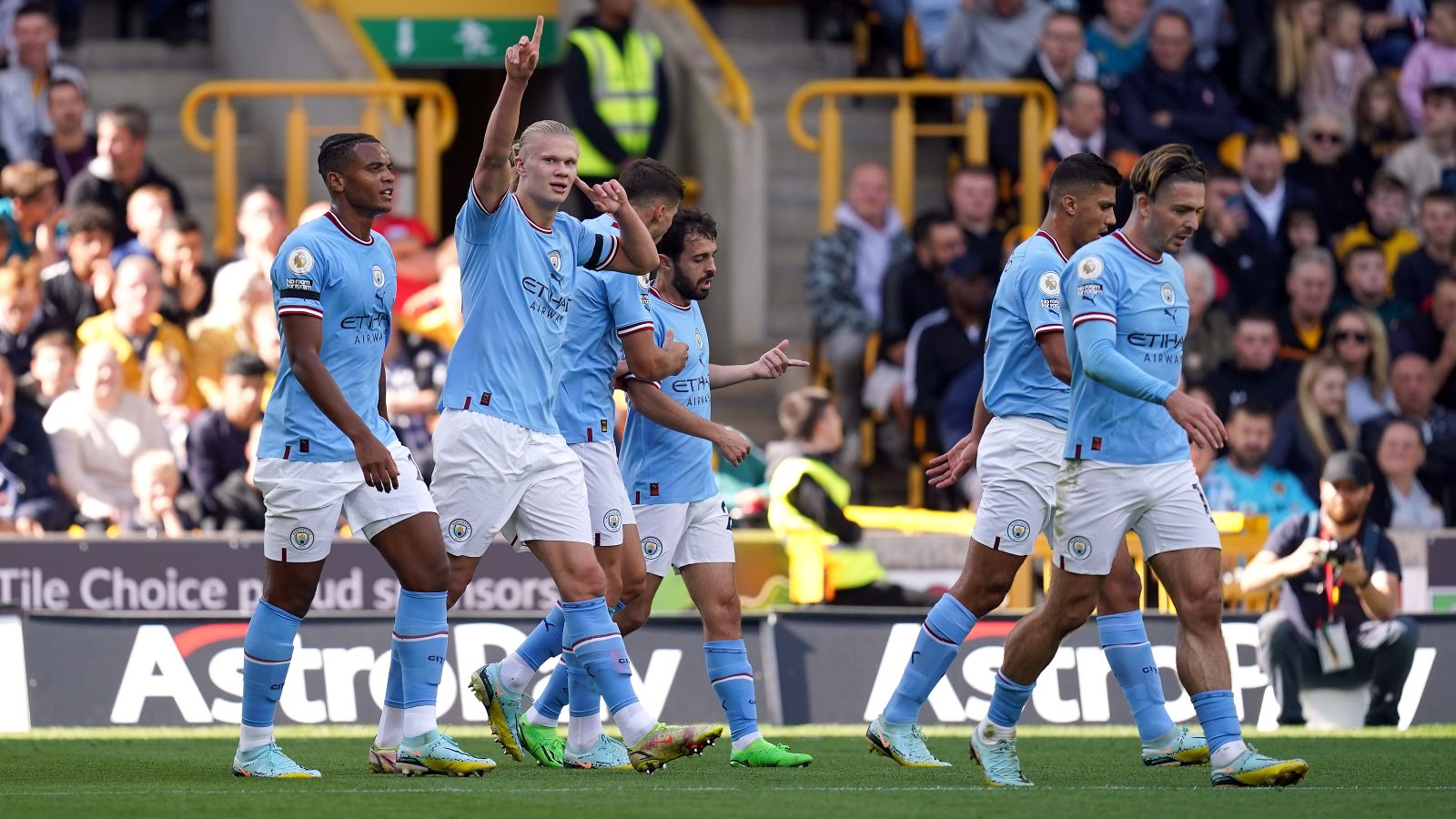 Erling Haaland scored his 14th goal of the 2022/23 campaign as Man City picked up all points at Molineux against Wolves, who were down to ten men.

The Norway international got one goal in Manchester City‘s ruthless 3-0 victory against Wolves.

Jack Grealish silenced his critics as he opened the scoring before Phil Foden added a third after the interval.

City moved above Arsenal, before the Gunners’ Sunday trip to Brentford, in clinical fashion but were helped by Nathan Collins’ reckless challenge on Grealish, which saw the defender dismissed before half-time.

Wolves, with just one win this season, did not crumble – especially after playing an hour with 10 men – but were outclassed and fell behind after just 53 seconds.

Foden’s backheel freed Kevin De Bruyne on the right and, while his low ball was missed by Haaland, Grealish outmuscled Jonny to fire in his first goal of the season off a post from five yards.

Boss Pep Guardiola defended the midfielder before the game and it was only the £100million man’s fourth Premier League strike for City, amid growing criticism of his output.

Wolves responded and Ederson saved from Goncalo Guedes but City always had control even during frantic moments of a hectic opening.

That was underlined when Haaland doubled their lead after 16 minutes.

Wolves were left wide open when the striker collected Bernardo Silva’s pass and drove at the defence from 30 yards.

There was a hesitancy about Wolves and, with Max Kilman backtracking, Haaland’s bobbling shot found the bottom corner from 20 yards. It was his 100th goal in 99 games in all competitions since 2020.

It was that threat which saw Collins lose his head to see red 12 minutes before the break.

The defender went to contest a bouncing ball on the left with Grealish but only succeeded in a dangerous studs-high challenge into the England man’s midriff.

Collins pleaded his innocence but it was wild and left Wolves in even more jeopardy.

To their credit, Bruno Lage’s side – unable to call on new signing Diego Costa as he builds his fitness – refused to go quietly and at least began the second half in bullish fashion.

City had also taken their foot off the pedal, allowing Wolves to find some momentum, and Guedes missed his kick from 12 yards after an hour.

The visitors appeared happy with their lead but, after Jose Sa saved from Haaland, quickly moved through the gears to score a third with 21 minutes left.

Again, Haaland was at the centre of things as waited for De Bruyne to advance on the right and the midfielder found Foden to flick in across Sa from six yards to settle the game.