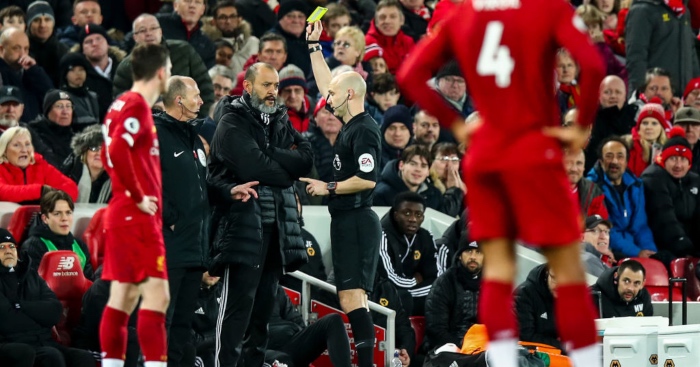 Wolves boss Nuno Espirito Santo insisted “I don’t want to talk about it”, over the VAR controversy which saw his side lose 1-0 to league leaders Liverpool at Anfield.

Sadio Mane’s winner was originally ruled out for a handball by Adam Lallana in the build-up but was overturned by VAR after the replays showed it had in fact struck the midfielder’s shoulder.

VAR was involved again moments later, as Pedro Neto’s equaliser was chalked off as Jonny – who crossed for the Portuguese forward to finish – was millimetres offside just before.

Nuno told BBC Match Of The Day: “It was a tough game. First half Liverpool was strong. We stayed in the game, stayed organised and always the danger with the quality. In the second half we had good spells and created a lot of chances.

“We finished strongly. I am very proud of the players of the way we are doing things. it is a tough schedule and you can notice the game goes by the final minutes require a lot of energy. So let’s go again.”

On the VAR decisions, it appeared the Wolves boss was about to break into a Rod Stewart classic.