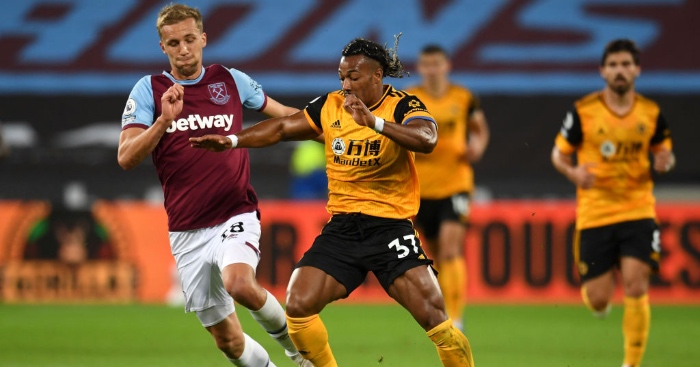 Wolves manager Nuno Espirito Santo has instead that his star winger Adama Traore is ‘delighted’ to be at the club, amid transfer rumours linking him with Europe’s elite.

Traore has attracted interest from the likes of Man Utd, Liverpool and Barcelona in recent seasons.

The 24-year-old has become a valuable player in the Premier League after showing off his dribbling and attacking skills.

Despite the rumours, Santo has ensured Wolves fans that the player will stay. He said (via Goal): “What I can say about this is Adama is delighted to be here. You can see how happy he’s been in training just by seeing us be together again.

“Things will happen naturally. Speculation around our players doesn’t bother us.

“We know what we have to do. First of all, you have to be happy where you are, and he clearly is.”

Santo seems to be confident that the Spanish international will sign a new contract at Molineux in the near future. His current deal expires in 2023 which Wolves are hoping to extend.

According to recent reports, the player is interested in beginning negotiations about an extended deal.

Traore has become a vital part of the club’s success in recent seasons. His deadly skills going forward have seen him form a devastating partnership with the likes of Diogo Jota and Raul Jimenez.

Jota recently moved to Liverpool, but January signing Daniel Podence could shine in his place.

Wolves have had a fairly quiet start to the season by their own high standards. They’ve beaten Sheff Utd and Fulham but have also lost to West Ham and Man City.

They face Leeds United at Elland Road in an important Premier League game for both sides.