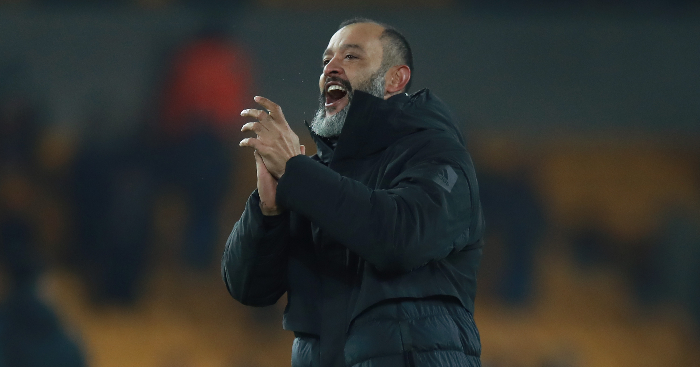 Wolves boss Nuno Espirito Santo believes allowing his players to spend Christmas Day with their families is the best preparation for Friday’s game against Manchester City.

Nuno’s players will be able to spend Wednesday at home, having trained on Tuesday, and will then train again on Boxing Day ahead of the visit of Pep Guardiola’s team.

Days off have been a rarity for Wolves, with the Europa League making for a demanding schedule. Last week was the first time this season that Nuno’s men had not had a midweek game.

“The programme is ready. We will train (on Christmas Eve), and the 25th is off,” said Nuno at his pre-match press conference on Monday.

“It’s Christmas Day! So everybody will have the chance to be with their families. Then, we return on the 26th and we prepare for the 27th. We then recover on the 28th – let’s see how – and we play again on the 29th, so the programme is ready.

“If the situation was that we were playing on the 26th, the 25th would be impossible to have off. But, in this way, it’s good. It’s very important to be with our families.”

Nuno feels such gestures help to keep squad morale high and will give Wolves a greater chance of getting positive results.

“The players will enjoy it, for sure. If you have good relationships and friendships, when you work together, you’re stronger.

“You have a real friend beside you that wants the same as you do. We always try to value these moments. We’ve had trips, and we have time for the players to enjoy. It’s important.”

City have not hit the heights of last season and the back-to-back Premier League champions are well off the pace in the defence of their title behind current leaders Liverpool.

However, Nuno said: “It’s a fantastic team, with fantastic players and a fantastic manager. There’s nothing more to say.

“It’s amazing the way they play football, it’s amazing in the quality they have in their manager and their players, so it’s going to be a very tough challenge for us. Every game in the Premier League is a cup final.”