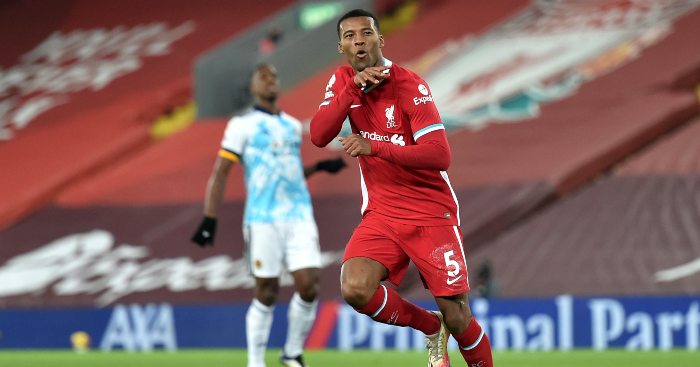 Wolves are the latest club to be linked with a move for Liverpool midfielder Georginio Wijnaldum with his contract up for renewal.

The Holland international is out of contract in the summer, which means he can begin negotiating with overseas clubs from January 1, and talks about extending his stay at Anfield have hit an impasse despite Jurgen Klopp clearly wanting him to stay.

MAILBOX: All the reasons why Liverpool can’t win the title…

He made his 209th appearance – only 29 of which were as a substitute – in just over four seasons in Wednesday’s goalless draw with Newcastle United.

And now Gazzetta dello Sport (via Sport Witness) claims that Wolves are interested in taking Wijnaldum to Molineux for free in the summer.

The line in the Italian newspaper reads: ‘One who should renew is the Dutchman Wijnaldum, 30 years old: Wolves will attempt him, but (Jürgen) Klopp will do everything to keep him at Liverpool.’

That suggests that rather than actually move to Wolves, Barcelona or any other club, Wijnaldum is more likely to renew with Liverpool before the summer.

Klopp has been here before, of course, as he faced a similar situation with Emre Can in 2017-18.

The Germany international made 38 appearances during that campaign but declined the offer of a new contract and left for Juventus on a free contract in the summer.