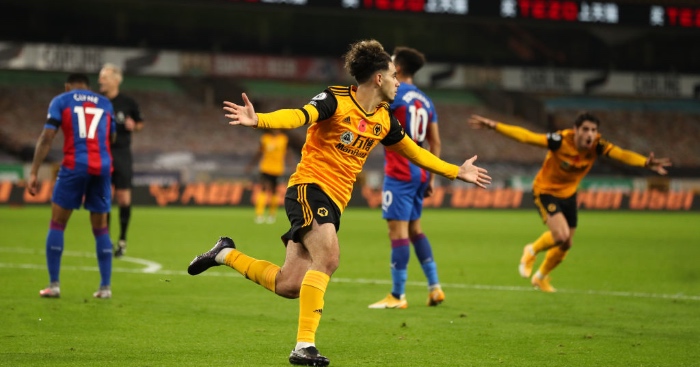 Nuno Espirito Santo’s side sit third, level on points with Everton and Liverpool at the summit, ahead of the weekend after their most complete performance of the season.

Palace had a penalty correctly overturned by VAR and saw a Michy Batshuayi strike disallowed for offside but they were well beaten and Luka Milivojevic was dismissed late on.

Wilfried Zaha struggled to make an impact as Palace missed their own chance to make a mark among the pacesetters.

Five-goal Zaha, who has already scored one more than last season, slashed over inside the first 90 seconds but it was his only effort of a frustrating night before Wolves took control.

Palace, though, had the potential to be explosive on the break and sent Wolves a warning when Batshuayi fired in Zaha’s cross, only to be correctly flagged offside.

It was one the hosts heeded immediately and they moved quickly to open the scoring after 18 minutes.

Podence escaped down the right and when Cheik Kouyate flicked his cross to Ait-Nouri, who joined from Angers in the summer, the wing-back’s first-time drive found the bottom corner.

From then Wolves enjoyed their first-half dominance with Ruben Neves dictating the play and Nelson Semedo curling an effort inches wide.

Dendoncker struck the bar from 30 yards before the hosts found a second after 27 minutes.

Palace squandered possession from a throw and when Raul Jimenez fed Pedro Neto his cross was finished well at the far post by Podence.

It would have eased boss Nuno’s fears after he voiced his concerns about Wolves’ lack of first-half bite. His side had previously failed to score before the break in 58 games since returning to the top flight in 2018.

Palace, though, were willing victims and their tame efforts deserved little more.

Even still, after Dendoncker hastily cleared a Scott Dann header, the Eagles thought they had a lifeline seven minutes before the break.

Van Aanholt lured Willy Boly into a lazy challenge for a penalty but the visitors’ hopes were extinguished when it was overturned by VAR,with Van Aanholt offside in the build-up.

Zaha’s appeals for a penalty then went ignored after Ait-Nouri appeared to clip his ankle in the area and Zaha’s irritation was underlined later when he was booked after clashing with the defender.

As Palace pressed for a way back they began to leave space and Dendoncker lashed Neto’s cross wide after a swift break on the hour.

Podence steered wide as Wolves regained a degree of control and Palace’s night got worse with four minutes left when Milivojevic was dismissed for a tackle on Joao Moutinho after referee Martin Atkinson’s video review.