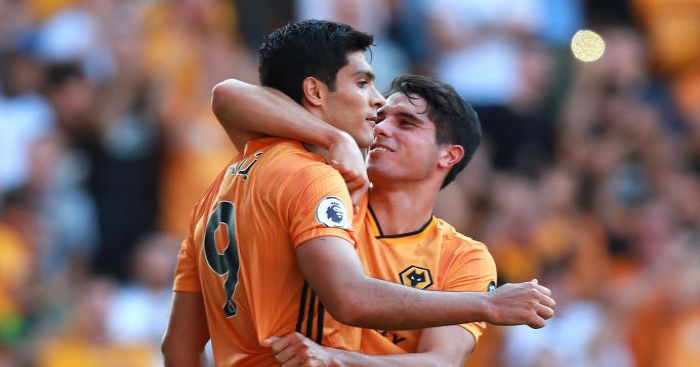 Best player: Raul Jimenez
Adama Traore is in the conversation – he’s been excellent and wonderfully entertaining – but so much of what Wolves do well in attack depends on Jimenez. In fact, it could be argued that the tangible return of players like Traore – and, more recently, Diogo Jota – is more pronounced because of the Mexican.

Put his goals aside. They’ll always be a forward’s currency and that’s no different here. But it’s the way he scores, how he sustains breaks and counter-attacks and how he moves off the ball while a move is developing. That’s what puts him in position to score goals, but also what makes him the ideal forward for this side.

Removing any player from Nuno Espirito Santo’s team would weaken Wolves, but without Jimenez there wouldn’t be much of an attacking identity – and that’s meant as a compliment, because he’s been woven into this team quite beautifully and continues to perform at the very highest level.

Biggest disappointment: Jesus Vallejo
Not the very best loan signing, was it? Vallejo’s only Premier League start came in that bizarre 5-2 defeat to Chelsea at Molineux and as soon as the transfer window re-opened he was heading back to Real Madrid.

A strange one. He is talented, he can carry the ball out from defence and he should have been an asset, but don’t be surprised if he reappears somewhere down the line. When he left the club in search of more minutes, Wolves professed themselves pleased with his attitude and application; they couldn’t fault his professionalism, so this might have just been a case of wrong place, wrong time.

Best performance: The comeback against Manchester City
There’s probably some valid technical criticism over how a team with a numerical advantage found themselves two goals down in the first place – that’s fair – but it was still a thrilling recovery and, without question, one of the games of the season.

It was also Traore’s finest performance up until that point. He’d been excellent against Tottenham earlier in the month, creating a psychosis in Jan Vertonghen which lasts to this day, but that night was another level of productivity and further demonstration of what a changed player he was – and how refined he’d become, and how happy he suddenly was playing in new, more central areas.

Which was great…for everyone there.

I was ill, stuck on a platform at Wolverhampton Station with an Oats So Simple, having a meltdown with Sarah Winterburn over Facebook Messenger.

Still, at least everyone else had a good time.

“Both games were very special”

🗣 Wolves striker Raul Jimenez says the two wins over Manchester City are his favourite games so far this season.#WWFC #TalkingWolves

Worst performance: The loss to Manchester United at Old Trafford in the FA Cup
Was the humiliation at home to Chelsea worse? Absolutely; it was much more ugly. But those were the early days of the Europa League and, besides, when an opposition centre-half unleashes an Exocet from 35 yards, most fans accept that it’s probably not going to be their day.

Old Trafford was more irritating, because the FA Cup looked winnable for Wolves then and even more so now, given the teams who were subsequently eliminated. Back in mid-January, Santo’s players faced a United team who were legitimately dreadful and still weeks away from being enlivened by the arrival of Bruno Fernandes, and yet they responded with a dispiriting show of inferiority which, at the time, seemed like a big step back.

Biggest VAR moment
Uniquely, Wolves actually had goals disallowed in two games against the same opponent. For a handball against Leicester on the first day of the season and, more recently, by the silliest offside decision of the season, which ruled out Willy Boly’s header at Molineux, preserving another goalless draw.

Not that such things matter at the moment, but those twin episodes were VAR’s debut season in microcosm: fewer goals, less entertainment, more lost time and irritation.

Conor Coady was less than happy about it:

Dick move
There wasn’t one, really. Actually, they’re in credit – owners Fosun International recently donated 2,300 pieces of protective equipment to the city of Wolverhampton and the first-team squad have also recently made a six-figure donation to the NHS, independent of the big Premier League Football benevolent fund.

Did their recruitment work?
A hard no to Jesus Vallejo and Patrick Cutrone, for obvious reasons. The latter returned to Italy on loan in January and, unfortunately, has subsequently contracted coronavirus.

Better news elsewhere, though, because Pedro Neto looks like a fine use of £18m, even if he continues to be thwarted by VAR. Making Leander Dendoncker’s move permanent for just £13m looks like an outrageously good bit of business too and, actually, given Dendoncker’s versatility and level of performance, he should probably be in their Player of the Year debate. Particularly so given how well Wolves’ small squad has coped with European competition.

Keep watching Daniel Podence, as well. He was a mid-season arrival from Olympiakos and while he remains prone to bouts of self-indulgence and taking on one too many defenders, he could potentially be a very dynamic Premier League player.

What they need in the summer:
Nothing major and it would depend on how (if) the season finishes. If they were to win the Europa League (and qualify for the Champions League), then it might be worth a run at a really top target – a long-term replacement for Joao Moutinho, perhaps, or a new starting centre-half – but as things stand they’re just in the market for youth, variation and back-up.