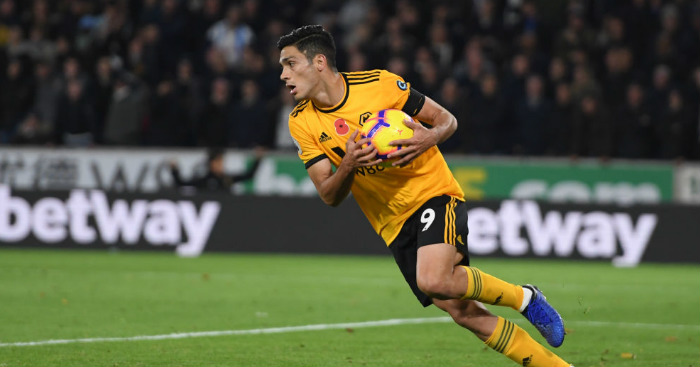 Criticising officials is football’s hidden sport within a sport. My side has suffered worse decisions than your side. This referee is always biased against us. I AM MORE FULL-THROATED IN MY BELLOWS OF INJUSTICE AND THEREFORE DEFINITELY RIGHT.

As far as tedious aspects of TV coverage go, this is somewhere in between pundits punditing other pundits and the increasingly idiotic gambling ads that fill our screens at every possible opportunity, getting more mind-numbingly inane and bombastic with every passing month to the point that you expect next season’s ads to be little more than Ray Winstone issuing a long, guttural moan into the camera while odds pop into frame around his eyes; eyes that, when closely observed on a 4K TV, reveal the long-dead soul of a once-credible actor.

That Ladbrokes advert annoys me more everytime I see it. If you're going to add the clunky-af "and everybody!" then don't have him say "Lads lads lads!" in the first place ffs.

Despite having every second of match action covered by dozens of cameras, despite having an array of talented ex-pros on hand to offer their expert opinions on tactics and fitness and psychology, despite having the advantage of showing us in 15 seconds the little moments of movement and genius that could only be described in several hundred words, it has long been decided that the best use of its time is to pore minutely over refereeing decisions.

There is never any concession of the fact that if three seasoned former players can’t agree on a decision after a couple of replays, then the referee’s decision is at the very least understandable and they should just move on to something else. They press ahead regardless, apparently on the basis that lengthy disagreement is engaging to the widest number of people; if everyone in the studio is arguing indignantly, then so too will everyone at home be coating their TV screens with flecks of furious spittle. Outrage is addictive.

However tedious this process may be, the inconvenient fact for the Premier League is that having spent the summer getting used to VAR, the debate about its implementation is not going to go away. The Rubicon has not only been passed, but cracked open and heartily swigged, leaving us all with a mango-y aftertaste that will last for years.

Saturday’s seven games featured two offside decisions even more egregious than the misunderstood metaphor in the previous paragraph: one against Sadio Mane that would have put Liverpool ahead in the first half against Arsenal, and another against Wolves right-back Matt Doherty in the build-up to a Wolves ‘goal’ that would have pegged Spurs back to 2-1 before the break at Molineux.

A year or two ago, the lesser-spotted generous fans would have shrugged and accepted that these things happen, while the uppity majority would have bemoaned the continuing decline in refereeing standards from some mythical apex of the officiating profession that apparently existed sometime in the past. Liverpool and Wolves would have complained about it, but it would have been mere impotent wailing and vague demands for improvement in officiating.

The problem the Premier League has now is that we have seen how quickly and relatively painlessly video technology can be implemented. This is not to suggest that it is a flawless panacea – there were more than a couple of baffling decisions made from the Moscow control deck, and fans will always find some way of insisting that their team, and their team alone, has been hard done-by in some way.

But unless – until – it is brought in, it will become increasingly difficult for the powers that be to ignore fans’ and pundits’ claims that VAR would have corrected the more obvious errors, such as the ones against Mane and Doherty. There are some very compelling arguments against bringing in VAR, some of which have been made on these very pages. But each time a decision can be universally agreed to have been incorrect within a couple of TV replays, those arguments will feel a little weaker to all but the most die-hard sentimentalists.

If endlessly debating 50/50 calls is bizarre, then the idea that Liverpool would definitely have beaten Arsenal or Wolves would have got a point out of Spurs if only we had VAR is nonsensical, albeit compelling in its simplicity. It does help those simplistic arguments that Wolves were excellent throughout, and didn’t deserve to fall 3-0 behind, as if football – or life – ever really has anything to do with what anyone ‘deserves’. Their two penalties made for an exciting, compelling end to the game, and the sense of ‘if only’ definitely added to that.

Chaos theory has it that the slightest change to a continuum of events alters all else that follows. Anyone who has had to listen to a stoned housemate wittering on about the potential dangers of travelling back in time to kill Hitler will understand this point with excruciating clarity. In other words, had Raul Jimenez’s goal been rightly allowed to stand, it’s entirely possible Spurs would have taken it as a kick up the arse and gone on to win 6-1; or that Liverpool would have never got a second goal had Mane’s effort stood. And if you don’t hold any truck with chaos theory, instead subscribing to the principles of predestination – well, then by your own definition the referee was never destined to allow that offside goal, was he? Ahhhhhh someone’s been hoist by their own petard, haven’t they?

Yet no amount of that kind of philosophical outfoxing – and let’s face it, you have been pwned – nor Nuno Espirito Santo’s post-match magnanimity (“It’s hard not to feel a little bit unfair when you see the images, because it’s so clear, but that’s the job of the referees and I wish them all the best”) will reduce Wolves fans’ sense of injustice, or the feeling that if only we had VAR, they would have claimed another big-game point to sit alongside the ones they took from Everton, Manchester City and Manchester United. For Liverpool, it will rankle all the more if the title race remains as close as it has been so far. And for as long as fans keep feeling that sense of injustice, knowing a potential solution simply needs an administrative green light, the VAR debate will continue to gather steam.