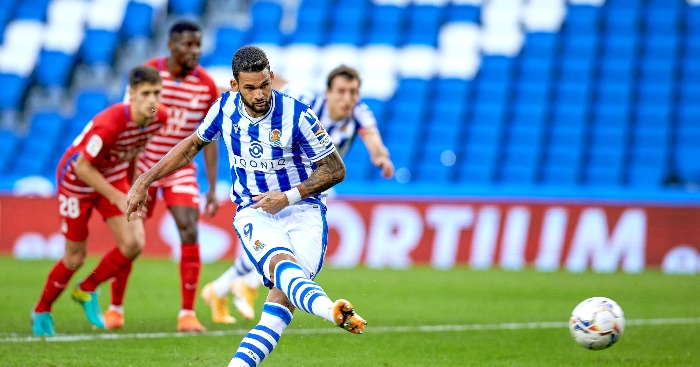 Wolves have completed the signing of Willian Jose on loan from Real Sociedad, the club has announced.

The West Midlands team needed to sign a new striker this month after the serious injury to Raul Jimenez.

They’ve been using youngster Fabio Silva up front, but the 18-year-old has only scored two goals this season.

Wolves have now brought in Jose on loan until the end of the campaign.

The deal is subject to a work permit and international clearance.

On Thursday, reports emerged stating that Wolves had agreed a deal with Sociedad to sign Jose.

The trio were all thought to be tracking the 29-year-old last year.

Jose is an effective target man who will bring plenty of experience to the club’s attacking lineup.

He’s played for a host of Spanish clubs during his career and even made one appearance for Real Madrid.

For Sociedad, he’s bagged six goals and one assist in 21 matches this term.

Jose will compete with Silva for a place in Nuno Espirito Santo’s starting eleven.

Silva has looked promising but is still getting used to life in the Premier League.

He could become a future star after joining Wolves for £35.6 million from Porto.

They’ve already loaded out Ruben Vinagre to Famalicao and Oskar Buur to Grasshoppers.

Wolves also have Patrick Cutrone available after the Italian came back from a loan spell with Fiorentina.

It’s not yet clear when Jimenez will return to the first team. He suffered a fractured skull during their match against Arsenal back in November.