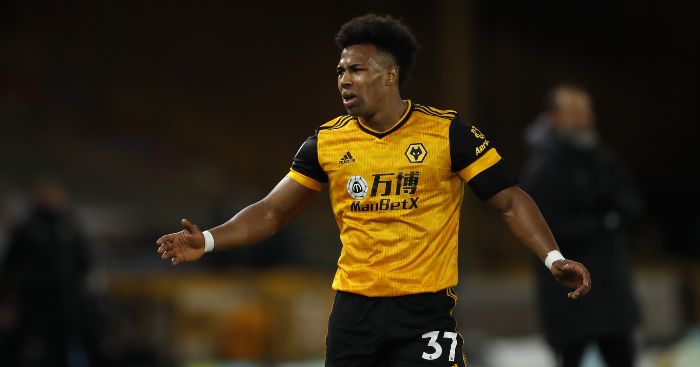 Liverpool have rejoined the race to sign Wolves attacker Adama Traore amid interest from other clubs, according to reports.

The Spaniard joined Wolves in August 2018 from Middlesbrough in a deal worth around £18m and has made a big impact at Molineux.

Traore managed to contribute four goals and nine assists in the Premier League last term but his form has taken a hit this season.

The 24-year-old has zero goal contributions in the league this campaign and has had to come off the bench in seven of his 18 appearances.

Traore’s contract expires in 2023 and his limited time on the pitch has reportedly seen him stall over signing a new deal at Wolves.

A report in December claimed that Leeds United were planning a bid in 2021 for Traore with Liverpool also said to be interested.

The Reds were reportedly put off signing Traore last summer by Wolves’ huge demands for the winger, with reports at the time quoting a €70m asking price.

However, Sport (via Sport Witness) now reckon that Wolves only want around €40m for his services with Liverpool interested again.

Nuno Espirito Santo is ‘insisting’ that Traore stays but the attacker is apparently worried that his current form will keep him out of the Spain squad for the European Championship in the summer.

Traore has scored in the FA Cup this season with a superb match-winning goal in Wolves’ victory over Crystal Palace earlier this month.

It was the Spain international’s first goal since finding the back of the net against Espanyol in the Europa League, 33 games before the match against Palace.

And Nuno was delighted after the match, he said: “It was a special goal from a special player. I am very happy because I think this goal will boost his confidence. He has been really trying in training sessions and that is why I am so happy.

“I ask all the players to get shots on goal, now I will ask Adama to keep doing this every game.

“He’s always looking for ways to improve his game and help the team. He’s hard working and special. He has good actions in the game, good delivery, good crossing that we have to take advantage of.

“But we have to have patience with everybody. It has been a hard season for everybody, all the teams, players and managers. You can see how the situation affects everybody.

“Adama is a versatile player who can play in a couple of positions and one thing we are sure about is that every time he is on the pitch he always has an impact.”