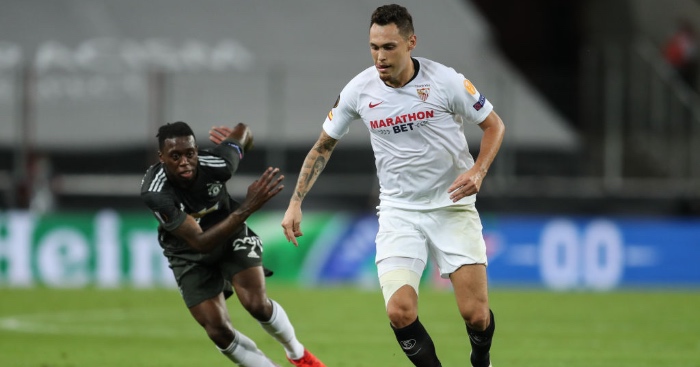 Wolves have lined up Sevilla winger Lucas Ocampos as Adama Traore’s replacement, according to reports.

Traore could leave the club this summer as multiple big clubs fight for his signature.

The winger was in impressive form during the most recent campaign. He scored four and assisted a further nine in 37 Premier League appearances.

FEATURE: The forgotten winners who medalled in Champions League glory

Man City, Liverpool and PSG are all believed to be interested in the Spaniard, who is valued by Wolves at £75 million.

In preparation for a potential bid, Wolves bosses have now set their sights on Ocampos as his replacement, according to Express.

The Argentinian recently won the Europa League with Sevilla after they beat Inter Milan 3-2 in the final.

His performances during the last campaign have resulted in talks of a potential move to the Premier League.

Wolves are reportedly prepared to bid £55 million for Ocampos as they look to secure European football next season.

Ocampos has a £62 million release clause written into his contract. However, Wolves are confident they can get this reduced as Sevilla’s funds have been impacted by the coronavirus pandemic.

Ocampos clearly made a good impression when he faced the West Midlands club earlier this season.

The 26-year-old scored an 88th minute winner as Sevilla beat Wolves in the Europa League quarter-final.

They went on to beat Man Utd and Inter to be crowned the 2019/20 champions.

Ocampos achieved 17 goal contributions in 33 league games last term. His style of play could see him become a big success at the Molineux stadium if he links up well with Diogo Jota and Raul Jimenez.

Wolves will have to break their transfer record if they want to sign the player. Their current record is the £30 million they paid for Jimenez back in 2019, which has paid off as the Mexican is now one of the deadliest strikers in the league.

You can see all of this summer’s confirmed transfers on our dedicated page.