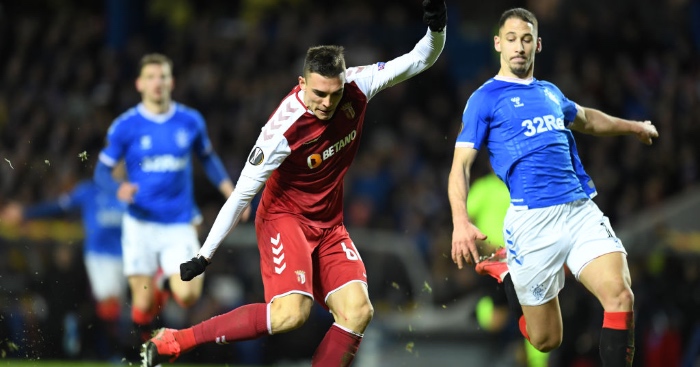 Wolves have had a successful season in the eyes of many after finishing seventh in the Premier League and reaching the quarter-finals of the Europa League.

But manager Nuno Espirito Santo is already looking to improve the squad ahead of the next campaign.

Wolves are looking to sign Sporting Lisbon midfielder Joao Palhinha and Braga striker Paulinho, according to Portuguese outlet A Bola (via Mirror).

Lisbon’s Palhinha is apparently open to a Premier League move. The deal would cost the West Midlands side around €13 million, which is relatively inexpensive in the current market.

One stumbling block will be Wolves’ current midfielder Ruben Neves, who is Santo’s first choice.

Palhinha is believed to want regular first team football and will therefore only move if Neves is sold to one of Europe’s elite clubs.

Neves has been linked with a big money move to Juventus and Liverpool, although he looks set to stay this summer.

Paulinho will cost the club around €30 million but could prove valuable in their hunt for Champions League football next campaign.

Jimenez has had an impressive season at the Molineux, scoring 17 goals in 38 Premier League appearances.

His form has meant that he’s now linked with a move to Man Utd as competition for Anthony Martial. However, Utd legend Cristiano Ronaldo is also thought to want the striker with him at Juve for next season.

Wolves have been fairly quiet so far in the summer transfer window.

They signed Matija Sarkic on a free transfer from Aston Villa, but he’s the only player they’ve brought in.

They sold Helder Costa to newly-promoted Leeds United for £16 million.