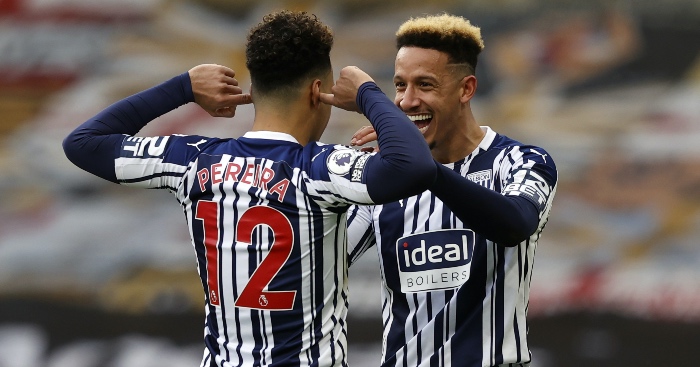 The forward struck twice from the spot as the Baggies won 3-2 at Molineux to claim just their second victory of the Premier League season – and Sam Allardyce’s first in charge.

Quickfire goals from Fabio Silva and Willy Boly had given Wolves a half-time lead after Pereira’s penalty opener.

But Albion turned the first Black Country derby for nine years around with their own rapid response, Semi Ajayi’s header levelling before Pereira’s spot-kick winner soon after the break.

West Brom remain second bottom but are now just three points from the safety line before Brighton’s game at Leeds, which is remarkable given their abject form this season.

Wolves’ struggles continued, having won just once in their last nine games. They remain marooned in 14th, ten points above the drop zone but ten adrift of the top five.

The last time the pair met in 2012 West Brom won 5-1 at Molineux to spark Mick McCarthy’s sacking and Wolves’ eventual tumble into League One. Today was another heroic effort from the Baggies.

Wolves slipped into their recent bad habits when Adama Traore wasted possession 25 yards out before Callum Robinson was clattered by Boly.

It was ruled just inside the area after a VAR check and Pereira sent Rui Patricio the wrong way – with Albion’s muted celebrations sticking to new coronavirus protocols.

Behind for the ninth straight game, Wolves tried to respond and Kieran Gibbs escaped when the ball hit his hands after Button’s miscued punch.

Traore shot over and Leander Dendoncker tested Button as Albion began to invite their hosts on but stayed firm.

They even came close to doubling their lead when Kamil Grosicki nodded through to Robinson, only for Patricio to deny the striker at close range.

It looked like it would prove costly as, despite Albion visibly growing in confidence, their soft centre was exposed when Wolves turned the game with two goals in five minutes.

The first came seven minutes before the break when Boly held up Pedro Neto’s free-kick to flick it to Silva and, with the grounded Pereira playing him onside, the striker found the bottom corner from six yards.

Defender Boly had returned to aid Wolves against Albion’s set-piece threat but he struck a second blow at the other end two minutes before the break.

Albion looked to have caved – two defensive lapses undermining an improved performance – before they struck twice in four minutes to stun their hosts.

They levelled after 52 minutes when Dara O’Shea’s long throw was flicked on by Kyle Bartley and Ajayi’s glancing header looped in at the far post.

Then, with Wolves reeling, Grosicki found Robinson and he was felled by Conor Coady as he tried to turn in the box. Pereira swept in his second penalty to win it.

It was the first time Albion had come from behind to lead this season and it was one they never lost.

Wolves’ reaction was frantic and, although Silva dragged wide, they failed to recover with Patrick Cutrone wasting their best late chance when his volley bounced over.