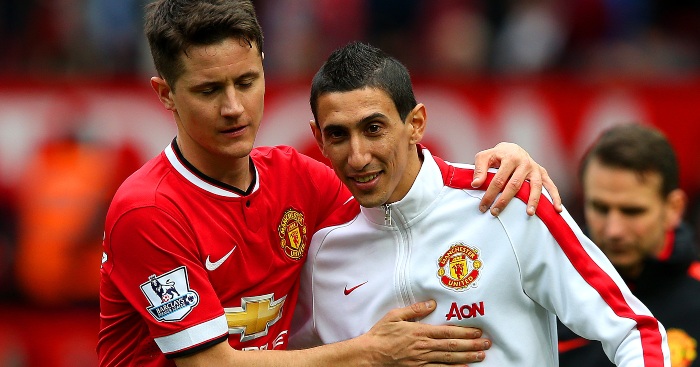 Following on from Daniel Levy’s profit XI, we’ve put together a team of Ed Woodward’s biggest transfer turkeys. This XI were bought and sold (for a loss) by Woodward since he took over from David Gill in 2013…

GK: Vanja Milinkovic-Savic (£1.25m)
‘Man Utd sign Milinkovic-Savic’ wasn’t nearly as clickable in May 2014, when it was announced that the younger brother of Lazio’s in-demand midfielder Sergej had signed a five-year contract at Old Trafford, with FK Vojvodina receiving a transfer fee in the region of £1.25million.

Milinkovic-Savic’s contract was torn up with three and a half years still to run. The teenager left United without really getting his gloves dirty in Manchester. He stayed with Vojvodina on loan until summer 2015 and when he could not get a work permit to play in England, he quit United for Lechia Gdansk. A year later, Milinkovic-Savic joined his brother in Italy, though Torino subsequently loaned him to SPAL, Ascoli and recently Standard Liege.

RB: Guillermo Varela (£2m)
Officially, Varela was the maiden signing of the post-Sir Alex Ferguson and David Gill era, making him David Moyes and Woodward’s very first recruit. The Uruguayan defender signed a four-year contract in 2013 but went on loan to Real Madrid’s B team before making his United debut. He played four times for Louis van Gaal before being loaned out again by Jose Mourinho.

That’s where it went wrong for Varela. He was due to play for Eintracht Frankfurt in the DFB Pokal final against Borussia Dortmund. Ignoring the club’s advice, he went out to mark what would be the biggest game of his career to date by getting a sleeve tattoo. As you do. Unfortunately, it became infected and kept Varela on the sidelines while Frankfurt lost in the final. The German club was furious, suspending Varela, ruling out any loan extension and fining the defender around £63,000, which was said to be slightly more than three months wages.

With no deal on the table at Old Trafford, Varela returned to Penarol in 2017, before coming back to Europe with FC Copenhagen 18 months later.

CB: Ander Herrera (£29m)
Hands up, there’s some shoehorning going on here, but Herrera did play in a back-three at least once for United – they lost 3-0 at home to Tottenham.

The whole situation around Herrera’s exit was weird. Here was one of the few players who remained popular with supporters but United seemingly went to little effort to keep him. They belatedly offered a deal with double his previous £80,000-a-week wages but by then PSG had already plonked a contract on his table worth almost treble his previous terms. Many were sad to see him go but understood United’s stance as they waved off a player they paid £29million for in 2014.

CB: Bastian Schweinsteiger (£6.7m)
Sheesh… Look, Schweinsteiger has been playing as a sweeper for Chicago Fire, so he can do a job in defence for us here, too.

If you watched any of the former Bayern Munich captain’s 18 Premier League appearances at Old Trafford, you would probably understand the need to move him out of the hustle and bustle of central midfield. Schweinsteiger rarely looked fit and consequently, he too often laboured in Van Gaal’s engine room. Mourinho exiled the former Germany international but when that failed to provoke a response, the manager brought Schweinsteiger back into the fold before allowing him to join Fire on a free halfway through the three-year deal he signed upon joining United for £6.7million.

LB: Marcos Rojo (?)
The Argentina defender hasn’t left yet, but his United career is toast and it seems only a matter of days before he’s out of the Old Trafford door. Assuming someone comes to take him away…

Everton wanted him before the Premier League deadline but United wouldn’t entertain a loan offer from a domestic rival. Fenerbache have been linked but they too have apparently gone cold on a 28-year-old who can’t be trusted to stay fit. Should he go to Europe, United will no doubt be paying a large portion of Rojo’s £130,000-a-week salary awarded to him in one of the game’s most needless contract extensions ever in 2018.

CM: Marouane Fellaini (£17m)
Moving on to the midfield where, in contrast to the back four, we are drowning among big names that Woodward has taken a hit on.

Fellaini became the poster boy for United’s decline immediately after becoming Moyes’ first ‘proper’ signing. Woodward did the deal on deadline day in 2013 for about £4million more than it would have cost a few weeks previously when the Belgium midfielder had a clause in his Everton contract stipulating he could leave for £23.5million.

Fellaini certainly didn’t possess the technique of some previous United midfielders – or even some current ones. But unlike many of them, he had a bit of heart and his application was never found wanting. On that basis, Moyes, Van Gaal and Mourinho all came to rely on the big man before Solskjaer sent him to China in exchange for around £10.5million.

CM: Morgan Schneiderlin (£1m)
“When I first signed for Manchester United I had big ambitions.” They all do, Morgan. They all do…

None of them presumably involved being bombed by Mourinho after plenty of forgettable appearances under Van Gaal. The former France midfielder won an FA Cup – he stayed on the bench at Wembley – and somehow Woodward persuaded Everton to give United just a million short of the £25million they paid Southampton 18 months previously.

RM: Angel Di Maria (£15.7m)
United coughed up the highest fee ever paid by a British club when they signed Di Maria from Real Madrid for £59.7 million in 2014. The move was a disaster for all concerned.

Di Maria was hopelessly out of his comfort zone at Old Trafford, which was weird since he had thrived in the Bernabeu spotlight. “Talented, but a complete fanny,” was the way one of his former team-mates described the Argentina star to The Independent shortly before he faced United with PSG in the Champions League last season. Nothing Ashley Young has done in a United shirt has been as well received as the shove he gave Di Maria down the Old Trafford slope in the first leg of their meeting.

When Woodward sold Di Maria to PSG a year later at a £15.7million loss, it was widely seen as the best deal United could have hoped for.

LM: Alexis Sanchez (?)
Angel Di Maria II remains at United but surely not for much longer. Inter Milan want to reunite Sanchez with Romelu Lukaku – presumably they don’t show Man Utd matches on Italian TV – and even if they have to pay £12million of his wages, at least the Red Devils won’t have to deal with Sanchez draining the energy out of everyone else around Carrington.

Woodward has been criticised for doing the deal worth £35million that brought him from Arsenal in January last year, but few at the time thought he would be a bad signing – certainly not THIS bad. The salary raised eyebrows straight away, however. In hindsight, Woodward apparently acknowledges that giving Sanchez’s agent everything he asked for and ever dreamed of was not his finest hour. Now he just needs to cough up to get rid and move on.

FWD: Romelu Lukaku (£2m)
Woodward comes out of this one quite well. He gave Mourinho the £75million he wanted to bring Lukaku from Everton in 2017 before playing a blinder to take only a minor hit when Solskjaer wanted rid this summer.

Inter seemed unwilling and unable to cough up for much of the window until Woodward squeezed their balls and wrung out £73million just before the Premier League deadline. Unfortunately that left United no time to get a replacement so they are considering Fernando Llorente or Wilfried f*cking Bony instead.

FWD: Memphis Depay (£9m)
The £25million signing from PSV was a very gentle and tender lover during his time at United, judging from his Instagram activity, but sadly too crap a winger.

Mourinho insisted it was nothing to do with his professionalism when he sold Depay on to Lyon for £16million while United retained a buy-back clause, assuming he couldn’t really be that bad. But Wayne Rooney might disagree with the point about his attitude. “He came on at Stoke away and messed up for their goal so Louis van Gaal made him play for the reserves the next day,” Rooney told The Times last year. “I said, ‘Look, it’s a bit difficult for you. Just don’t come in with all your fancy stuff.’

“And he turned up for the reserve game in his Rolls-Royce, wearing a leather jacket and a cowboy hat. And I just thought, ‘What’s the point?'”