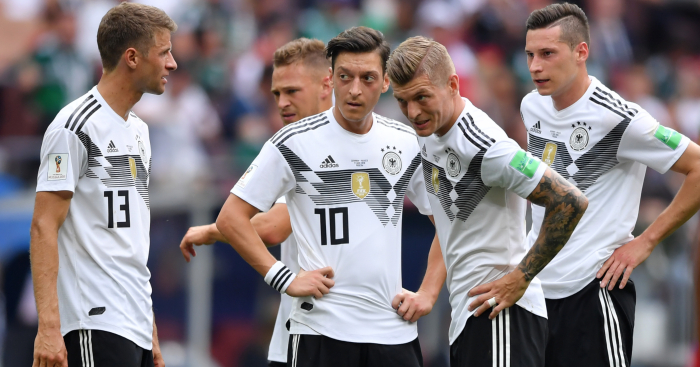 This is not how World Cups are supposed to go. Brazil, Spain, Argentina, France – all have shambled out at the early stages at one time or another. Not Germany. At least, not since 1938, when it was still a straight knockout and they lost to Switzerland after a replay.

For Germany, a disappointing early World Cup exit means a semi-final defeat. Whatever the format, they’ve been in the last eight at every World Cup since being allowed back in 1954. They’ve won it four times, been runner-up another four and in the semi-finals five more. Germany have entered 18 World Cups and reached the last four in 13 of them.

Basically, Germany are good at World Cups, is what we’re saying here.

But after (deserved) defeat to Mexico they go into their second game staring down the barrel. If Mexico have avoided defeat against South Korea earlier in the day – and they really, really ought to – then a Sweden victory here will see Germany going home at the group stage.

Even a draw here will leave Germany in the direst peril. Again assuming Mexico have taken something from their game against South Korea, a draw between Sweden and Mexico in their final group game would secure safe passage for both and send the Germans home.

Sweden huffed and puffed to victory over the Koreans but are far from the opponents Germany would wish for in a game like this. They knocked out Holland and Italy in qualification to get here, and also beat France along the way. Europe’s heavyweights hold no fears for a Sweden side playing with cohesion and collective spirit in the post-Zlatan age.

This is quite literally once-in-a-lifetime stuff. This is the game to watch because if you miss it then you might miss out on something pure, something glorious, something hilarious and something that will never, ever happen again.

Team to watch – Mexico
Don’t mess it up now, lads. Absolutely superb in victory over Germany, Mexico now face the very different prospect of defeating a South Korea side who will look to make things as difficult for Mexico as they did for Sweden before the righteous intervention of VAR in their opening game.

Victory over the weakest team in Group F here would – in all likelihood – set Mexico up to top the pool and that’s no small prize.

Player to watch – Aleksandar Mitrovic
I mean, it’s nearly always the case that Mitrovic is a player to watch one way or another. For better (Fulham) or worse (Newcastle) it’s rarely dull.

On Friday night he and Serbia face Switzerland in what is not-quite-but-almost an eliminator. Should Switzerland lose they are relying on a quite astonishing Brazilian implosion. Should Serbia lose, they’ll need to get something in their final game against Brazil and hope for the best.

A draw leaves Serbia needing to get a result against Brazil or hoping for a favour from Costa Rica.

Yes, both these sides will definitely want to win this one I reckon.

Cometh the hour, cometh the Mitro. He scored six goals in nine qualifiers – two more than anyone else on either side – and 12 in 17 to propel Fulham back to the Premier League after a January loan move.

It looks certain to be the sort of nerve-shredding nail-gnawer of a night that screams out for a mercurial maverick like Mitrovic.

Manager to watch – Roberto Martinez
Few managers have been more adept at failing upwards in recent years than former Wigan and Everton boss Martinez, whose phenomenally talented Belgium team must emulate England and find a way past Tunisia’s glorious array of niggling shithousery.

Now, they’ll probably do so. They’re a very good team, objectively a better one than England and definitely than Tunisia. But there’s an intriguing sub-plot developing in Group G where Germany’s struggles mean it might be better to finish second than first with one eye on potential quarter-final opponents down the line.

England were canny enough to just do enough against Tunisia, while Belgium recklessly scored two superfluous goals against Panama in their opener. Can Martinez successfully drill his team of insanely gifted attacking individuals to win by a more sensible, narrow margin in this one?

One-on-one battle to watch – Harry Kane v the Golden Boot
Tattoo-free, angular-faced goal machine Harry Kane has been criticised in some quarters for his single-minded pursuit of individual honours, whether that’s by claiming a magical intervention from his shoulder in the Premier League or openly targeting hat-tricks to try and keep pace with Cristiano Ronaldo in the World Cup.

I don’t have a problem with it, apart from maybe the swearing on his daughter’s life bit which was probably a bit much. Single-minded obsession with being as good as he possibly can has led Kane to this point – “this point” being arguably the world’s pre-eminent number nine who would go instantly to the top of the shopping list of any club with £100m lying around were he ever to be made available for sale. And if you can’t target individual prizes when you play for Tottenham and England then when can you do it?

It’s better to fail aiming high and all that, with Kane managing only a disappointing two goals in England’s win over Tunisia on Monday night. He’ll be keen to put that right against Group G’s apparent whipping boys Panama, who gave up two goals to another Golden Boot contender in their first game and will have it all to do against the singularly determined and focused Kane. At time of writing, a hat-trick would put Kane out on his own in pursuit of the prize that really matters. You really wouldn’t rule it out, would you? Even if it does accidentally lead to England topping the group.

Game to watch you normally wouldn’t – Japan v Senegal
Surely for discerning F365 readers such as your handsome selves there is no such game at a World Cup. But when pre-tournament viewing plans were made and wallcharts scoured, it’s reasonable to think that Japan v Senegal wouldn’t have exactly leapt out.

While Group H never looked the strongest section of the draw, this still looked like being a clash for third place behind seeded Poland and 2014 quarter-finalists Colombia.

Not now. The winners of this one will have one foot in the last 16 (and, who knows, maybe even a clash with England) and both feet if Poland and Colombia draw later on Sunday.

Senegal were particularly impressive against a strangely out-of-sorts Poland, while Japan were helped on their way by Carlos Sanchez’s early brainfade. Both recorded deserved 2-1 victories over the pool’s more fancied sides. Can Senegal back up one of the most impressive displays from the opening round? Can Japan do it against 10 men? Tune in to find out.