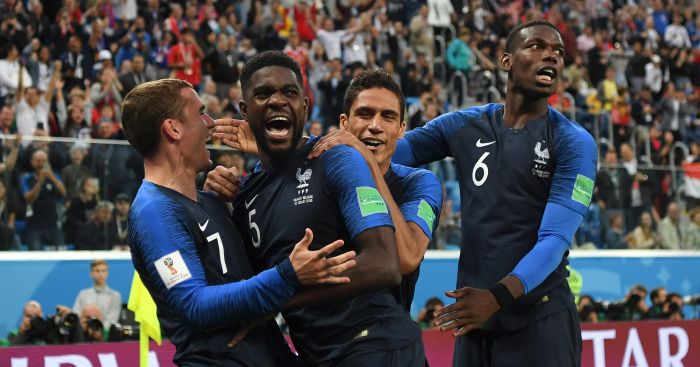 Game to watch – France vs Croatia
There is an unavoidable feeling of anticlimax to this World Cup final. That obviously stems from the fact that we so desperately wanted England to be in it, but also because France vs Belgium just felt like a final. They were the two best teams in the semi-finals, without doubt.

But those minor grievances will soon dissipate. This is the biggest match in world football, and with doubts over the 2022 World Cup this is the perfect chance to bid a fond farewell to a quite wonderful tournament.

World Cups mess with your brain. They both flash past in the blink of an eye, like when Christmas morning becomes Boxing Day before you have had a chance to fully enjoy the occasion, yet stretch long into the distant memory. Think the World Cup has gone too fast? Try and remember Russia’s five goals against Saudi Arabia and realise just how long ago that seems.

World Cup finals are not usually spectacular matches to watch; there is too much at stake for that. Only one of the last seven has contained more than two goals, and that a stroll for France against a barely-half-fit Ronaldo and deflated Brazil. In only one of the last seven have both teams scored. But this one could be different. It contains two entirely different styles, Croatia looking to suffocate through Luka Modric’s control and France looking to soak up pressure and strike on the counter attack with Kylian Mbappe and Antoine Griezmann.

The fear with France as clear favourites is that Croatia might finally run out of juice following 360 minutes of competitive football in 11 days largely played with the same XI. If Raheem Sterling was able to cause problems against slower defenders, just think what Mbappe might do. If Jesse Lingard found space between the lines, Paul Pogba and Blaise Matuidi could enjoy that same virtue with a far better defensive screen behind them.

But it would be foolish to write off Croatia. What they lose in individual quality – that midfield aside – they make up for in guts and effort. This country, created out of war and knowing hardship that goes far beyond sport, is hardwired to be resilient and react to adversity in the only way they know how: rolling up their sleeves and redoubling their efforts.

The final question lies with France and Didier Deschamps. Two years ago, France entered a major tournament final against a less-fancied European nation and bottled their chance. That defeat to Portugal has hung around Deschamps’ neck like an albatross ever since. This is his chance to redeem the reputation – and that will be the positive spin – but the watching French public will grow mightily nervous the longer the game stays level. Finals do funny things to the best of us.

Player to watch – Kylian Mbappe
Every World Cup needs an icon, the face to adorn a thousand different montages. It need not be a player who wins the tournament (Neymar was 2014’s icon, for better and worse, while Zinedine Zidane took that role in 2006 for equally diverse reasons), but when poster boy coincides with tournament winner, a superstar is born.

Mbappe started this tournament relatively quietly, yet it matters not how you start but how you end. Mbappe has grown into this World Cup and this World Cup has grown to love Mbappe. If the two goals against Argentina marked his arrival on the international stage, Mbappe hasn’t stopped running since. He is now the odds-on favourite to win the Golden Ball.

Mbappe could also be the star of the final. If Croatia have a weak link, it is two central defenders who lack pace and so struggle to recover when dragged out of position and a left-back who is solid but not spectacular. If Mbappe can supersede what Raheem Sterling did against Croatia’s right wing on Wednesday evening, France can dominate their opponent. Croatia should not expect France to be as profligate with their chances.

There are few reasons to doubt Mbappe, and youth is certainly not one. The most surprising aspect of his World Cup performances from a personal perspective is how prepared he is to stand toe-to-toe against gnarled defenders. He is no shrinking violet or flimsy winger. There is needle and know-how.

Now we get to find out if Mbappe is a man of finals. As Neymar, Lionel Messi and Cristiano Ronaldo know, in a social media world of extremism being a big-game player or big-game bottler can define a reputation in the eyes of your critics. This is his moment.

Manager to watch – Gareth Southgate
It is possible to simultaneously credit England’s manager for his role in reducing the apathy surrounding the national team post-Euro 2016 and for creating the positive environment in which young players had creative freedom to express themselves and enjoy their football while still believing that mistakes were made against Croatia.

If he had his time again, it would be interesting to know what Southgate might have done different. Rather than going like-for-like with his substitutions (Dier for Henderson, Rashford for Sterling, Rose for Young), could Southgate have tweaked the system rather than simply changing the personnel? Added steel in midfield might have allowed England to get a foothold in a game that slipped out of their grasp.

The 3rd/4th-place playoff is a nonsense, a game that nobody wants to play or particularly cares about winning. But it does give Southgate a chance to celebrate the mood that he has harnessed within his squad and give thanks to those who have not enjoyed many minutes in Russia.

It would also be interesting to see Southgate experiment with England’s shape, given the genuine free hit this game represents. Why not play a 3-4-3 formation with Kyle Walker as a right wing-back, Trent Alexander-Arnold with Ruben Loftus-Cheek and Eric Dier in midfield and Danny Welbeck and Marcus Rashford either side of a striker? There is literally nothing to lose.

Team to watch – Croatia
There has been plenty of talk about Belgium’s own Golden Generation, but this is surely Croatia’s last tournament as a group. Danijel Subasic is 33, Ivan Strinic 30, both central defenders 29, Ivan Rakitic 30, Ivan Perisic 29, Luka Modric 32 and Mario Mandzukic the same age. An entire spine knew that it was now or never, and they made it now.

The pressure is off Croatia. This squad was close to missing out on the World Cup, but the grit and guts displayed in Russia will ensure that – like England – nothing that happens now can be considered as a failure.

But it will be interesting to see how they deal with the fatigue that must surely have accumulated over the last fortnight. Against England, they should have been at least two goals behind at half-time but battled back into a position of supremacy. Will France let them?

There should be no fear. Perisic remains an underrated winger and will have seen the problems Eden Hazard gave Benjamin Pavard and have optimism. In Mandzukic they have a hard-working and selfless striker whose performances seem to improve as the games get bigger. And in Modric they have the best central midfielder in the world.

There is no such thing as a shot-to-nothing World Cup final. But Croatia have already gone far beyond pre-tournament prediction, and in doing so forged an identity and strategy for success that is now set in stone. They will take some shifting.

One-on-one battle to watch – N’Golo Kante vs Luka Modric
Kylian Mbappe might be the favourite for the Ballon d’Or, but this has not been a tournament of sustained individual brilliance. There is nobody to rival James Rodriguez in 2014. Indeed, one of the themes of this tournament has been the success of the collective over the individual. Even Belgium, sold as the standout group of individuals, became a team in Russia. Croatia, England, Sweden: these are the standout stories of overachievement.

It is therefore fitting that two of the three best players in this tournament are ultimate team players, and fitting that they will be in direct competition with one another on Sunday. Kante vs Modric may well be the battle that decides this World Cup final.

While Modric has rightly been lauded as the best central midfielder in the world, are we still in danger of underrating Kante? While France’s attack and central defence have both been praised for their completeness during this World Cup, everything relies upon Kante screening the latter, making tackles, covering yards and releasing the ball to the former. He is France’s fourth emergency service.

Covering Modric’s movement and cutting off his supply to Perisic and Ante Rebic in wide areas and Mandzukic’s in the air is France’s most important defensive task on Sunday. If Kante plays his role to perfection again, he probably deserves to be winner of the Golden Ball. But don’t hold your breath.

Other game to watch – Kilmarnock vs St Mirren
It’s the first competitive game between two British clubs this season, it takes place on Friday night and it is live on your bloody televisions. So cancel your plans, take the phone off the hook, sit yourself down on the sofa and whack on BT Sport 1. The break of minus two days between the World Cup ending and domestic football beginning has been a tedious one, but it’s back. Now drink it in.