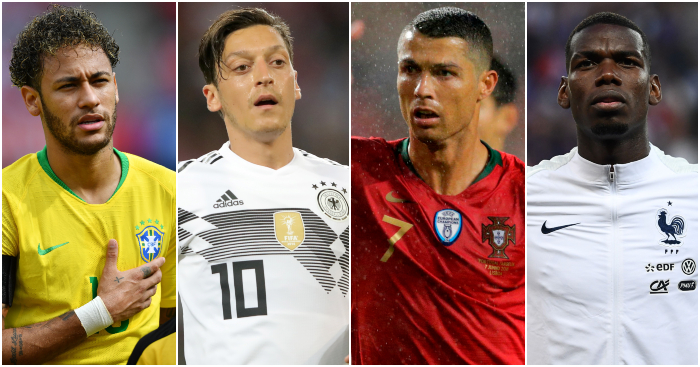 Game to watch – Germany v Mexico
The World Cup holders are unsurprisingly one of the hot favourites to retain their crown, but ahead of their opener the German machine is perhaps not as well-oiled as Joachim Low would like. His squad features competition for places, with the fringe players last year showing their credentials on Russian soil by cruising to a Confederations Cup triumph. Combine that depth with a spine that features many of the players who earned the nation’s fourth world title four years ago.

But Low is banking on his side playing their way into top form as the tournament progresses. “We would have wished for the team to be a bit more dynamic in the friendlies,” he admitted this week after a 2-1 win over Saudi Arabia was preceded by a defeat by the same score to Austria. Low, in his 12th year and sixth finals tournament as Germany coach, will know that a similar performance could be punished by an unpredictable Mexico side.

Juan Carlos Osorio has taken a squad to Russia that is fluent in attack, with Hirving Lozano in the shop window providing the ammunition for Javier Hernandez, who is well known to his German opponents. But El Tri have the adaptability to tailor their defensive shape depending on the opposition.

Mexico, Sweden and South Korea know they are playing for second place in Group F behind the holders. But given thsat Germany have won all five of their tournament openers under Low by an aggregate score of 13-0, Osorio will have to come up with a tactical masterplan in order to get a precious point.

Team to watch – Brazil
Half of the F365 team reckon Switzerland will be facing the winners on Sunday night, while the majority fancy Neymar to samba off with the Golden Ball. Brazil’s confidence appears to be contagious.

Belief is usually in plentiful supply with Selecao, but this time it appears to be based on far more than just wild optimism. Tite has a side blessed with a typically-thrilling forward line, but their first reaction to the horror of Germany 7-1 was to change the locks. Brazil now have a far more secure and better protected defence which conceded only 11 goals in 18 qualifiers.

Thanks to one of Gabriel Jesus’ disciples, Switzerland know the identity of the XI they will come up against. For all Tite’s efforts to suppress leaks – three men were positioned on a roof near the training ground to watch for drones – it was hardly the most cunning of plans. His team is the same as that which started the 3-0 friendly win over Austria. If ain’t broke, why fix it?

Player to watch – Paul Pogba
In terms of talent, the Manchester United midfielder should be the first name on Didier Deschamps’ teamsheet, but there have been doubts over whether it would be scribbled on there at all after a season of great hype but little substance. Jose Mourinho might not have many alternative options – not that it stopped the United boss from benching Pogba – but Deschamps does. Many pundits had called for Corentin Tolisso to be given Pogba’s place, but reports suggest the France boss will crowbar both into his midfield.

Deschamps has tried to encourage Pogba while many outside Les Bleus‘ camp chastise the 25-year-old, but the coach also made it clear that improvement was required and the rehearsals are over. Emmanuel Petit suggested he wanted to see Pogba angry and champing at the bit to prove a point. The build-up has certainly offered the United star plenty of provocation and the coming weeks will tell us whether, as some believe, Pogba is indeed oblivious to anything outside his bubble.

“I want to take the reins of the team but for that to happen the team has to be set up the right way,” he said in the build up to Saturday’s clash with Australia. But Mourinho tried almost every conceivable shape without much success. France have neither the time nor the patience to wait for Pogba until he feels the conditions are absolutely perfect for him to perform consistently.

Manager to watch – Fernando Hierro
Nobody comes out well from the farce that saw Spain sack their manager on the eve of the tournament. Except Fernando Hierro. For the caretaker coach this is a win-win situation.

If Spain fail to fulfil their potential over the next month, the blame will be shared between RFEF president Luis Rubiales’ bruised ego and Julen Lopetegui’s questionable judgement. Real Madrid may cop some of it too, but save for any act of uncharacteristic act of self-sabotage, Hierro’s reputation will remain unblemished. If Spain can adopt a siege mentality and claim back the World Cup trophy they surrendered so meekly in Brazil four years ago, then Hierro’s iconic status is elevated to immortal.

And this is not a difficult job. Upon his appointment on Thursday, Hierro said: “We have no time to dwell.” But the work is not already done. The former Real Madrid defender does not need to make sweeping changes or stamp his authority on this team to make this his team. Like Zinedine Zidane during his tenure at Real, Hierro’s primary mission is to act as a figurehead while staff continue to provide the players, who are unbeaten in their last 20 matches, the best platform to prosper.

The Spain ship doesn’t need steadying, it simply needs Hierro to grab the wheel and keep it on the course that has already been plotted

One-on-one battle watch – Cristiano Ronaldo v Sergio Ramos
The battle between the captains, club team-mates and the two stars yer Da can’t stand is the highlight of the opening weekend’s most intriguing match-up.

Ronaldo netted 15 goals while bringing the European Championship holders to Russia, where expectation is heightened after their triumph in France two years ago. That expectation is no problem for the Portugal superstar but if there is one defender best equipped to stopping Ronaldo, it must be Ramos.

The pair go toe-to-toe in training each day, while Ronaldo has never scored against Spain in four attempts, with Ramos featuring in La Roja‘s defence on the most recent three of those occasions. That includes during the finals of Euro 2012 and the 2010 World Cup,

Game to watch you normally wouldn’t – Morocco v Iran
Normally, you’d have to be a nerd of Daniel Storey proportions to consider spending an early Friday summer’s evening watching these two nations face off. But the World Cup changes everything. For the next month, je suis Storey.

So, tune into ITV to see Sir Alex Ferguson’s former assistant take on the former manager of Cambridge United. Carlos Queiroz admits this is a “must-win” clash if either side wishes to retain what slim hopes they may have of displacing Spain or Portugal in the top two upon the conclusion of Group B.

It almost certainly won’t happen, but Herve Renard’s insists that Morocco “are not here to take pictures in Saint Petersburg” as they embark upon their first World Cup finals in 20 years.

Queiroz and his men were in Brazil four years ago: “Iran have come on a lot… we’ve become more solid and competitive,” he claims, and they carry a greater goal threat, with Eredivisie Golden Boot winner Alireza Jahanbakhsh of AZ Alkmaar leading their attack.